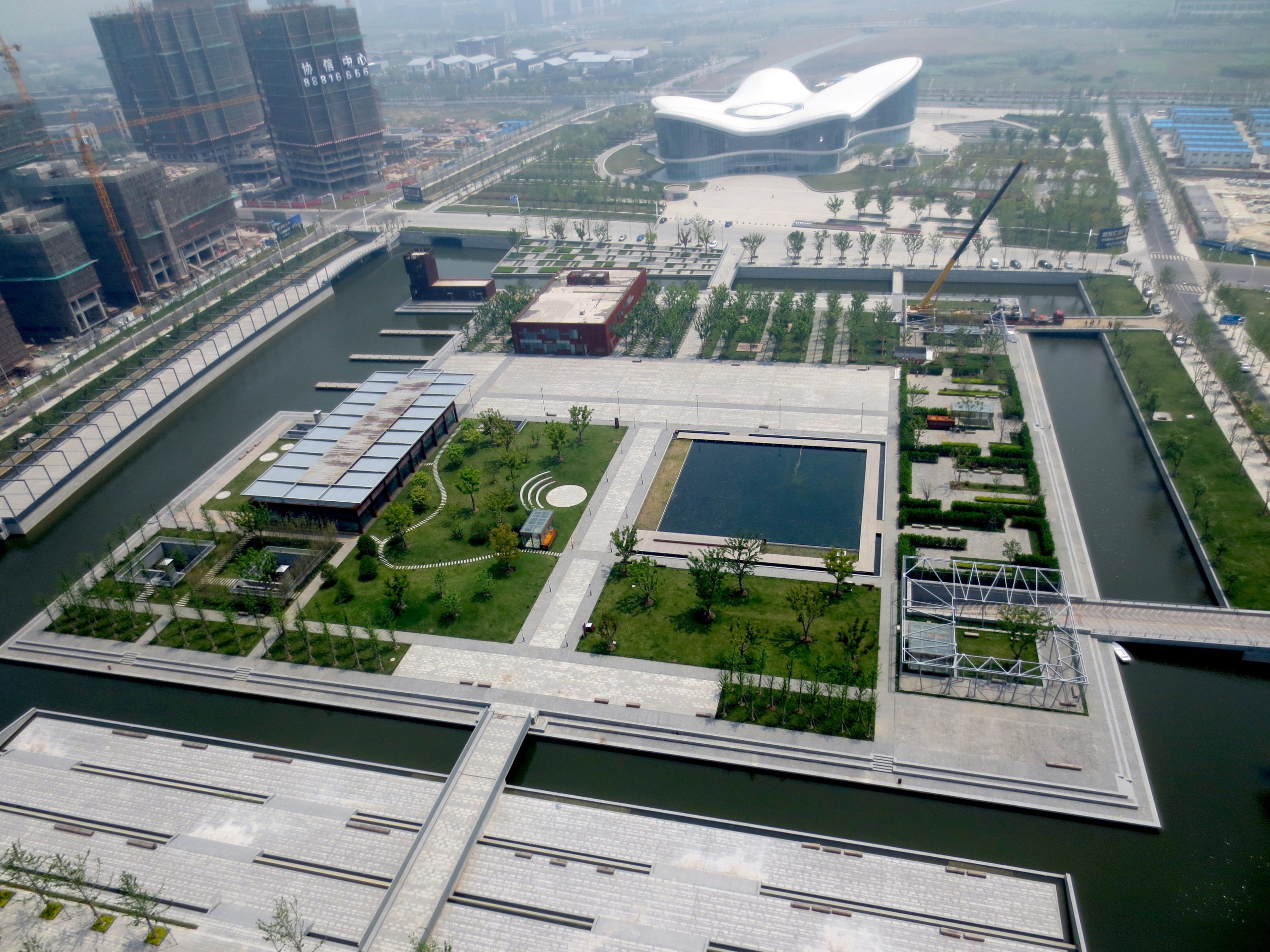 In the city of Wuxi, located about 200 kilometres northwest of Shanghai on the shores of the  Lake Tai, a national high-tech development, covering an area of over 100 square kilometres, was established in 1995. Part of this zone between the Channel of the Emperor and the Lake Tai, forms the new City of Science and Technology, with approximately 100,000 residents and 250,000 new jobs in an area of 16.88 square kilometres.

The focus of this part of the development is characterised by aquatic nature. Many Channels run through the countryside. An important main channel runs at a tangent to the site on the outskirts, in a North South axis towards the Tai Lake. A Central Business District in Wuxi will be developed in the middle of this new City of Science and Technology. This new sizable open space, spanning between two towers containing the city hall and a hotel as well as a large convention and culture centre, is considered to be the new nucleus.

Based on the fundaments of urban structure of the master plan, the new city centre is separated into three different urban spaces: The cultural space south of the convention and culture centre, the central space of the town centre and the countryside, the park to the north with its adjacent residential building development.

The two skyscrapers, which each have 28 stories, together with the convention and culture centre opposite, ensure that this central area is accentuated. The building areas to the east and west of the site include conference and office buildings that are 5 to 14 stories tall. The challenge for Valentien + Valentien Landscape Architects and Town Planner together with Molenaar Architects and Town Planner and Yiju Ding was to create an attractive urban space in Wuxi out of the 6 hectar, centrally located open area. Critical was the integration of the spaces surrounding the two skyscrapers and the convention and culture centre, as was the design of the entrances and exits.

A classic park didn’t seem to be a suitable solution between these important public buildings. The space’s large scale was considered to be too large for use as a plaza. The space in Wuxi would heat up too much and also feel uncomfortable. The concept was to encompass numerous streams and channels and in doing so, to create an urban landscape characterised by water, offering both diverse, small-scale spaces to rest as well as possibilities for large scale events. 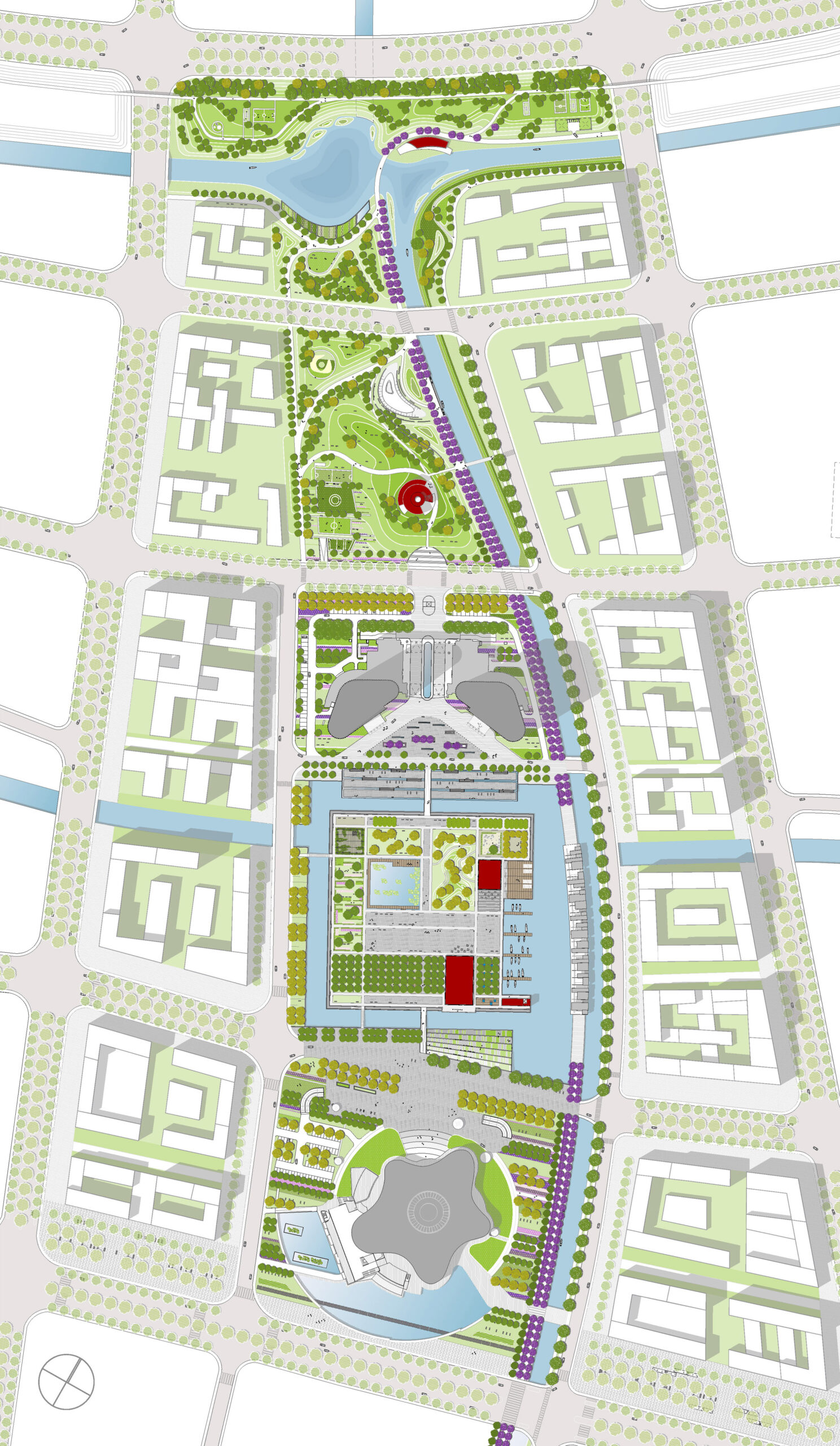 Wuxi – a collection of unique gardens

The image of the plaza in Wuxi is created through an overlay of several geometric patterns and structures. Paving materials, an expanse of water, green chambers, the groves, the hedges, and the meadows create a vivid and varied layout. The water plaza reflects the connection to the historic structure of water cities. A central viewing axis connects the convention and culture centre with the two towers. Surrounding channels mark the central, lower-lying water plaza, which spans approximately 3 hectares. They are connected to the main channel, the so-called Jade Channel that runs along the eastern side. The channel, with its wide esplanade, forms a spine which connects it with Lake Tai. The streets in front of the hotel, the city hall and the convention centre have been transformed into traffic-free zones.

Wide stairs and pedestrian bridges connect the immediate surroundings of the public buildings with the sunken garden of the water plaza. The water plaza is built approximately two metres lower than it’s surroundings, creating direct contact to the channel’s water flow. North of the culture centre is an amphitheatre, orientated towards the conference centre with its lakeside stage. On the opposite side of the water plaza, in front of the towers, leading to the channel is a water/stair area offering seating options.

A pergola structure spans the so-called water feature, east of the water plaza, as a part of the big esplanade. Below the pergola, one can find small elements that can be used to rest on, but which also function as mobile vending stations, kiosks and sanitary modules. The water plaza itself contains a wide range of infrastructure for recreation and leisure  activities. A café, including a visitor information point and a terrace is located close by the small boat harbour. Green chambers invite you to enjoy reading or meditation within them. A tower at the south-eastern corner provides a 360° view of the water plaza and the adjacent areas. On the ground floor, one can rent a boat, and use the kitchenette and rest rooms. A city museum was built under the café building, connected to an underground parking. The largest building hosts various events, with a lakeside stage and a restaurant for more than 150 guests. It is integrated in a large and shady grove, which frames the plaza. A collection of unique gardens and a green house enhance the existing activities and attraction on offer.

Read also about the Marine Educational Centre in Malmö.