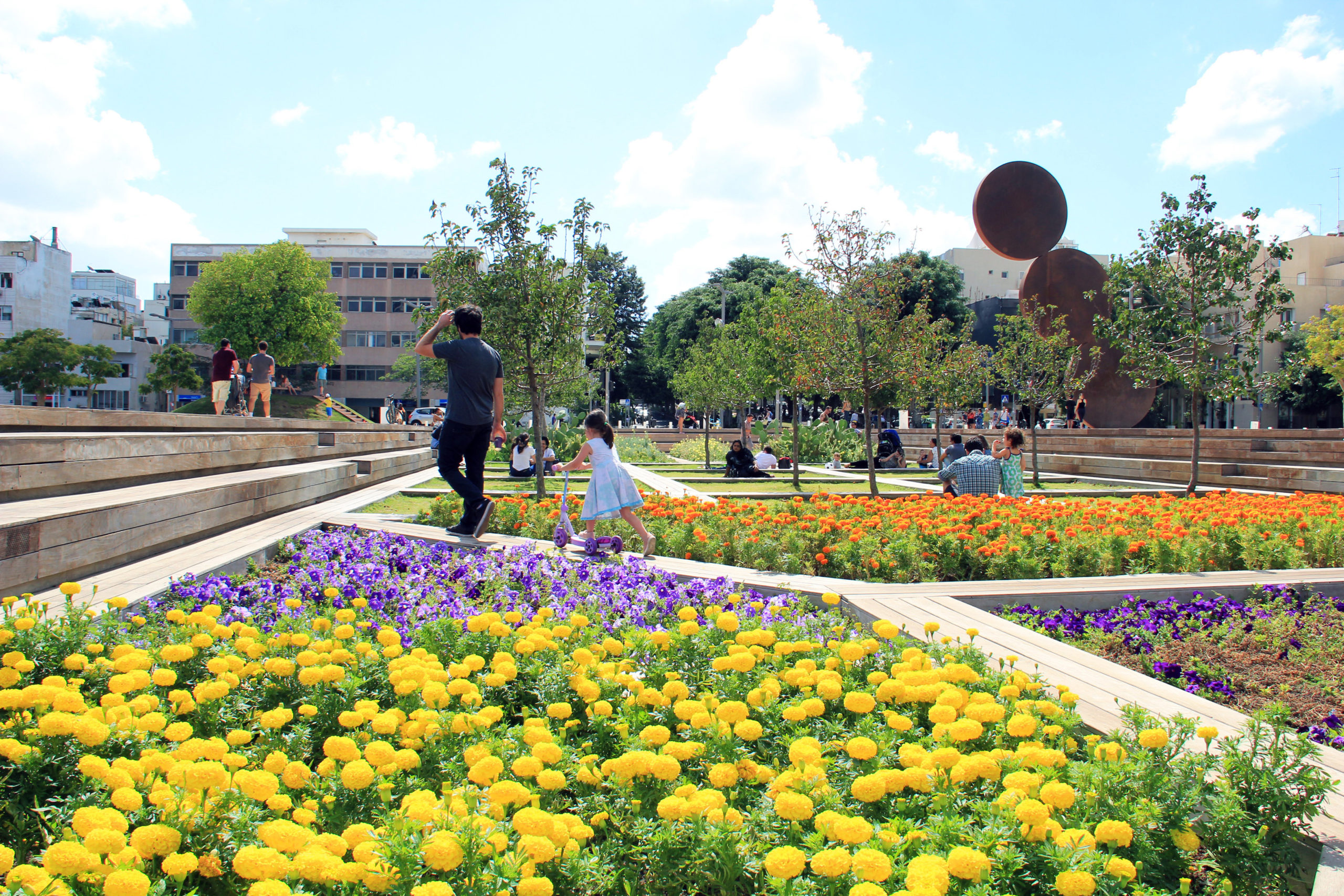 Habima Square in Tel Aviv has become a popular meeting point. Specifically the sunken garden has its appeal. A visit to the square, designed by Israeli artist Dani Karavan and completed in 2010.

Rothschild Boulevard, Tel Aviv’s famous avenue, is buzzing with people on a sunny October day. Locals sip on a coffee in the cafes and tourists admire the Bauhaus buildings. Further north the cultural centre with Habima Square at its heart emerges, extending the boulevard to another main avenue, Dizengoff Street.

The square, designed by Israeli artist Dani Karavan and completed in 2010, hosts a number of cultural institutions including the Habima Theatre, the Helena Rubinstein Pavilion of Contemporary Art and Jacob’s Garden.  The Mann Auditorium was the last building of the refurbished White City complex to reopen in 2013.

At first sight the square is an empty vast open space dominated by Menashe Kadishman’s sculpture ‘Hitromemut’ and an artificial grass hill with a sycamore tree. It reveals its different facets only with the discovery of the more intimate sunken garden and a large reflecting water basin. The various elements allow the visitor to experience the site from different perspectives and change from being the observer to being observed.

The minimalistic design of Habima square diverts the attention to the revamped Habima Theatre and Mann Auditorium, all renovated as part of Tel Aviv’s centennial celebrations, their slick and glitzy appearance contrasting with the adjacent residential buildings.

How is Tel Aviv dealing with its cultural heritage?

The White City of Tel Aviv obtained UNESCO world heritage status in 2003 for its innovative early 20th century town planning and Modern Movement architecture. Town planner Patrick Geddes’ first master plan in the 1920s envisaged the cultural centre to be a modern ‘Acropolis’ that combined all major cultural institutions. The plan was only partly implemented. The following decades saw the city centre decline and fall victim to new developments and a planning strategy favouring motorised traffic.

Habima Square became a parking lot. The refurbishment of the historic cultural centre sparked a controversy about the extent of the renovations and questioned the city’s strategy of dealing with its cultural heritage. Construction at the Mann auditorium only started after legal battles with renovation opponents while the appearance of the most dominant building, the Habima Theatre, and hence the square was altered significantly.

Habima Square is already worn down

The square itself has been embraced by locals and visitors and is a popular meeting point. Specifically the sunken garden has its appeal, with people lounging and reading books, young families spending time together and kids playing in the sand. In tradition with the spirit of the White City the design adopts a local character. The gardens display endemic vegetation. Cacti, lavender and almond trees commemorate the gardens located on the site before it was turned into a parking lot. The large sand area alludes to the sand dunes the city was built on.

This introverted character of the square, focusing on the centre, also creates some issues as the integration of the surrounding urban fabric is neglected. The lack of activation of the square’s edges could be improved by establishing more cafes and public facilities. With shade being scarce, the glare of the bright sandstone paving in the Mediterranean sun would not make it a pleasant space in summer. Construction defects are showing on the paving, the grass is partly worn off and the steel edges exposed. 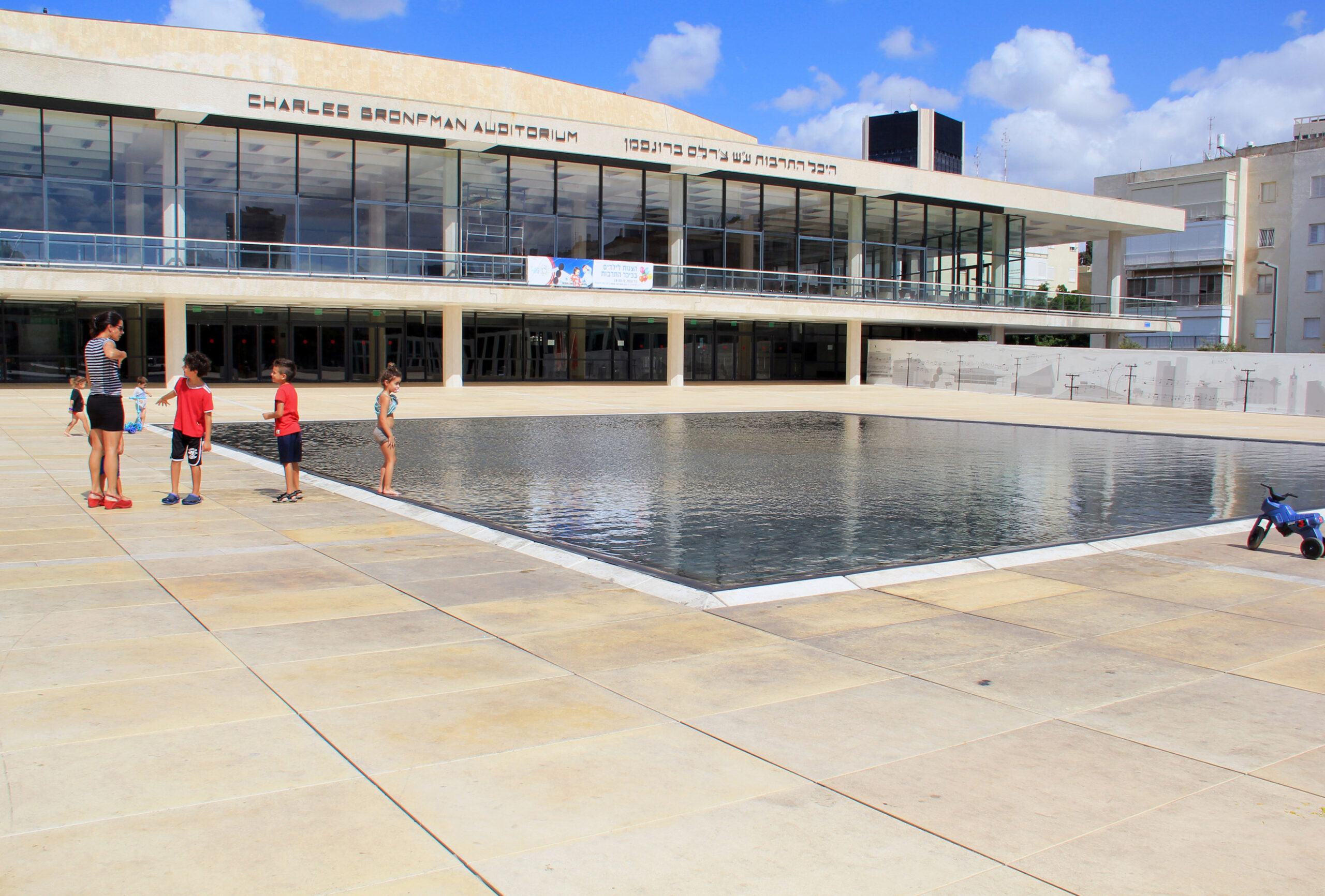 Rallies and protests on Habima Square

As Dani Karavan himself explained to the Israeli newspaper Haaretz, he was not satisfied with the execution of works. Yet the worn out parts are also a sign of the appropriation of this public space, another important aspect. Gentrification and exorbitant property prices are particularly problematic in the White City where many buildings still slowly decay despite (or because) of the high real estate values.

It was partly because of these processes that people took to the streets. The social protests of 2011 started at Habima Square just after construction was completed. It was its unofficial inauguration when protesters pitched their tents and occupied the square, thus becoming known as Tel Aviv’s Tahrir Square. It continues to be used for all kinds of manifestations such as a rally of gay activists last December.

The name Ha Bima – meaning ‘the stage’ in hebrew – is referring to the performances in the theatre and auditorium, but also to the public life displayed in the square and the surrounding boulevards. This new civic aspect has possibly generated a reinvention of the initial ideas of Patrick Geddes, who has been called ‘a pioneer in his insight into the nature of city as an organism constantly changing in time and space’ by the UNESCO.

Are you interested in other urban space projects? Get to know here the Share-it-square in Portland. 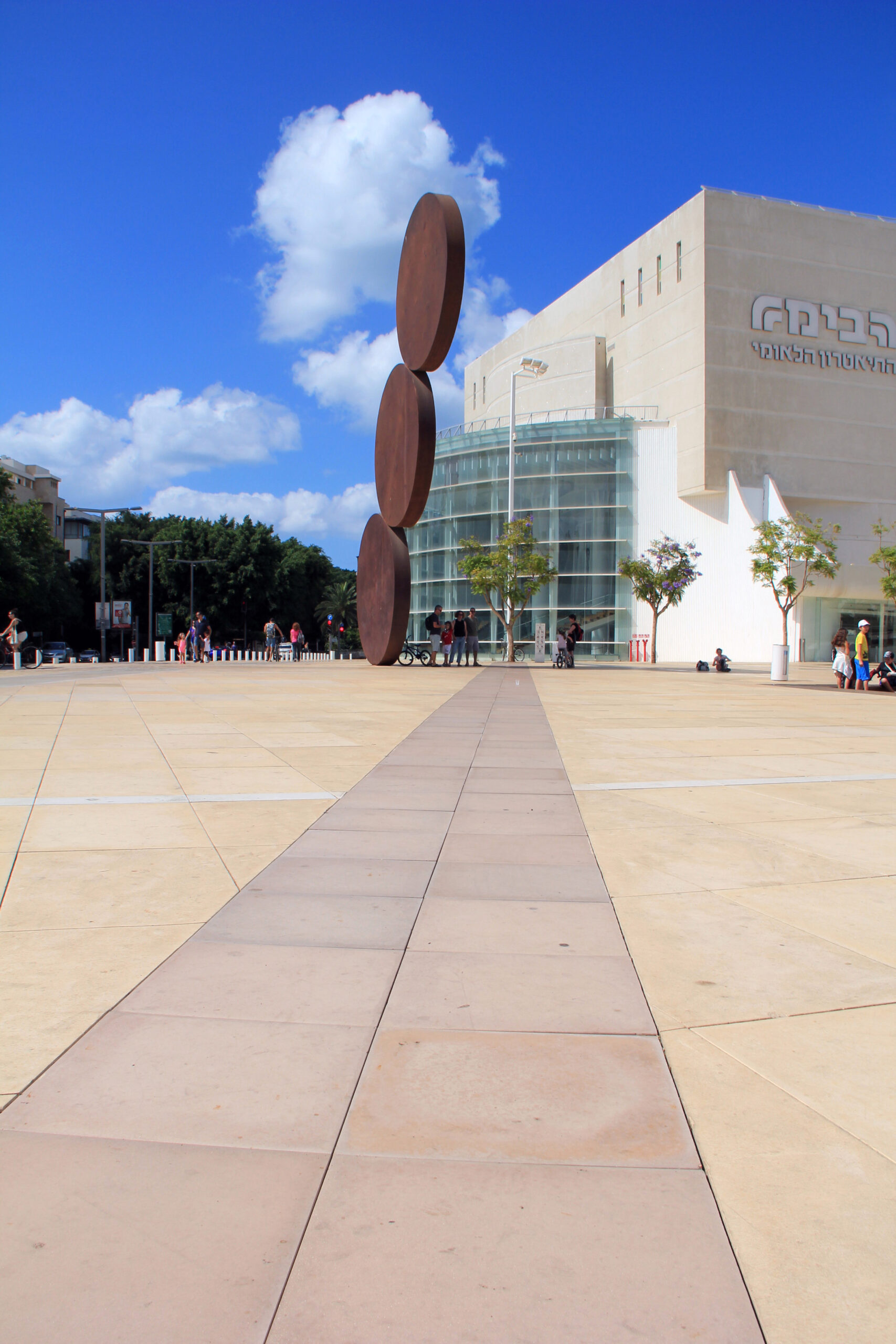