An academic studio developed a concept for the Bunaken Marine National Park that aims to channel visitors and protect the fragile underwater ecosystem.

Bunaken Marine National Park in Indonesia is not a lonely spot owned by nature but a well-known attraction flooded by tourists. An academic studio at the National University of Singapore developed a concept that aims to channel visitors and protect the fragile underwater ecosystem.

The world’s end is a beautiful place, and it has a name — Bunaken Marine National Park — located at the northern tip of North Sulawesi, Indonesia. Those who expect to find a secluded hideaway at this extreme periphery, will be disappointed. It can be reached from virtually any major airport on the globe, though the marine national park itself is only accessible by boat. Maybe it is true that one has to be distant enough, like the visitor, traveler, or tourist, to be able to see the beauty and uniqueness of such an apparent paradise. This is what everyone heads for when buying the ticket to North Sulawesi. The park’s natural environment sports multiple world records. At Bunaken Island, one find the highest number of mangrove species, the highest number of seagrass species, and the highest number of coral species — worldwide. To see all this, every tourist is required to buy a visitor pass, a regulation that has been in place  for more than twenty-five years. The problem is that hardly any stakeholder in the national park is able to name a single project that would have been financed by the proceeds. Corruption enriches a handful of thugs financially, and can degrade a whole region environmentally. 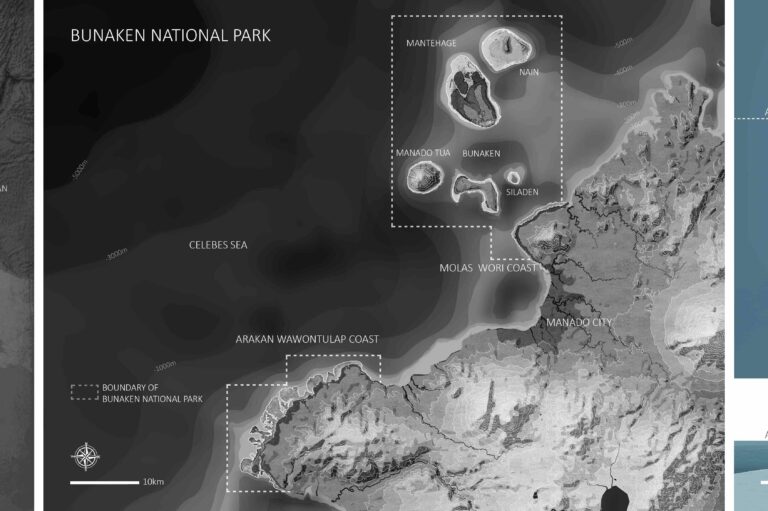 The world's end is a beuatiful place, and it has a name - Bunaken Marine National Park (Credits: MLA Studio Rekittke) 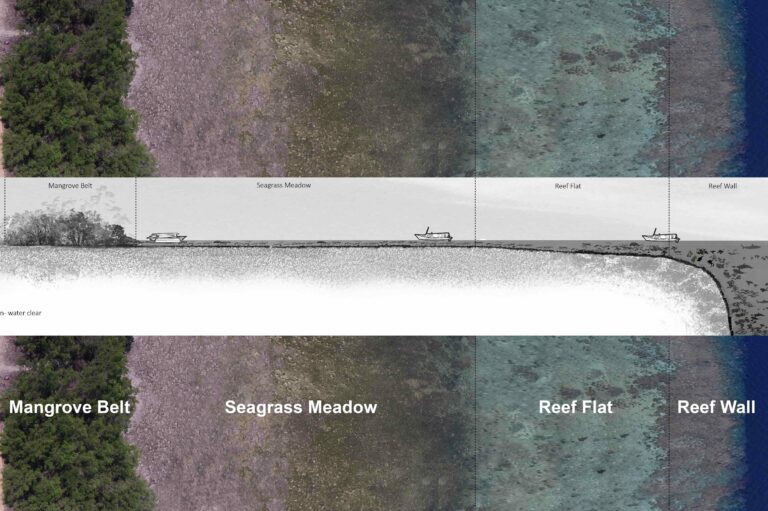 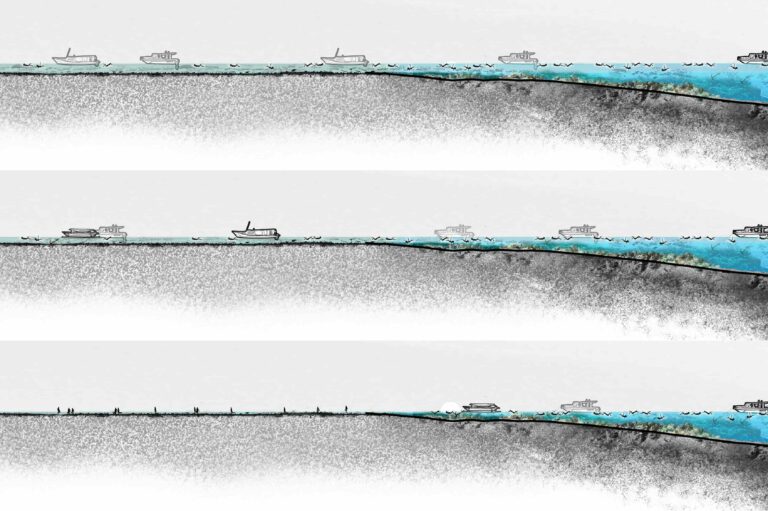 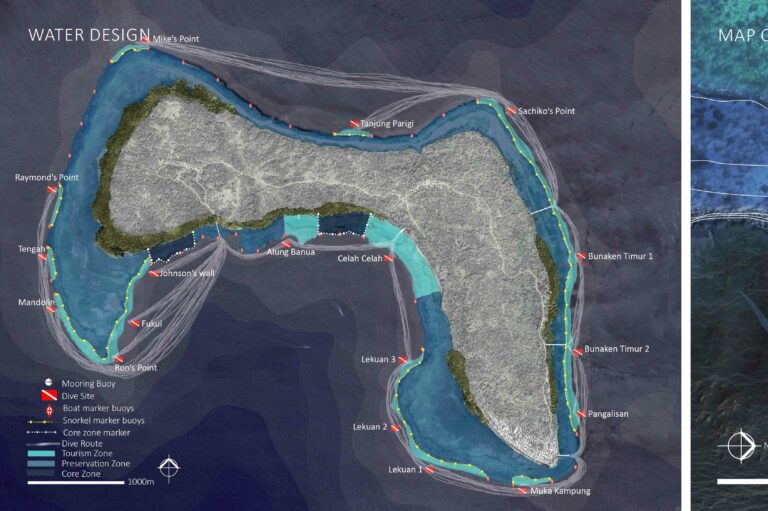 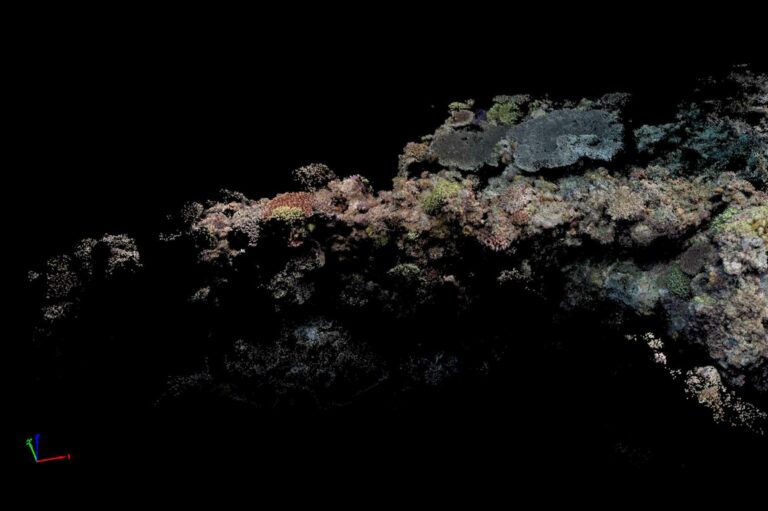 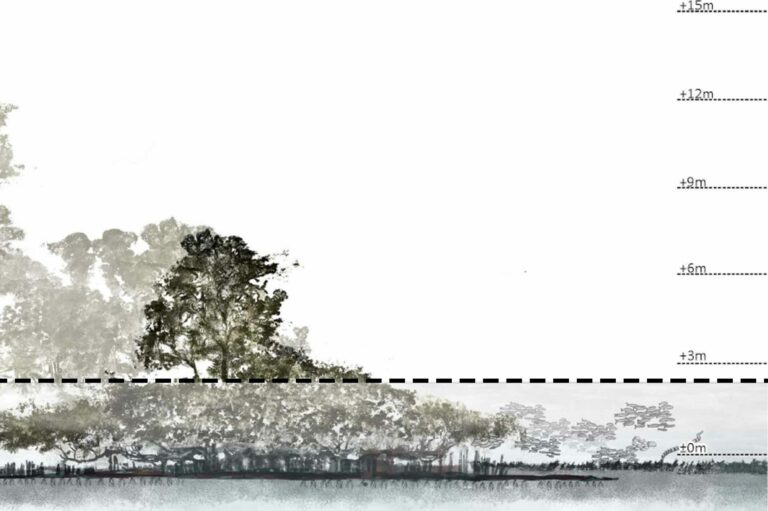 The main actor, with regard to tourism and income generation, is the vast underwater world that is visible only for snorkelers and divers. This marine part of the national park is highly endangered by a steady increase of visitors and the environmental stress that comes with it, both above water and underwater. It affects the mangrove belts, seagrass meadows, reef flats, reef crests as well as the vertical reef walls. The negative effects of mass tourism are simultaneously numerous and subtle so that they can only be approached by a holistic analysis and an inclusive design approach, also considering the set of problems faced underwater. The aim of our academic studio on the Bunaken Marine National Park, conducted with landscape architecture students of the National University of Singapore, was to develop necessary infrastructure components and essential forms of management on both water and land. We generated an aerial overview of a representative island-to-reef sample by a flight campaign with a camera drone (UAV). By that we obtained a comprehensive geo-referenced base model, which we could round off with supplementary close-range terrestrial and underwater point cloud models. In a next step we filled the gaps left uncovered by the UAV campaign, comprising areas under the vegetative canopy as well as in all underwater environments of the national park. The relevant wet component of the fieldwork was rather challenging. Most of the students had never snorkeled before. Nevertheless, we successfully produced model samples of the species-rich coral reef that is permanently underwater. Subsequently we focussed on the modelling of the complex, exposed and vulnerable structures of the intertidal mangrove belt. It is located partly above and partly under the water’s surface. The snorkeling campaigns between the mangrove roots were eerie and challenging — an environment not of this world. The tidal change induces extreme currents and the visible presence of the banded sea krait, one of the most venomous water snakes, by all means caused palpitations. It was worth the goose bumps, however, because mangroves epitomize the ever-changing conditions in a rich intertidal ecosystem, illustrating the temporary visibility and invisibility of marine landscapes. In a related peer-reviewed research publication, we point out that, based on our ability to operate in the air, on land, and finally in the water, we achieve what we refer to as field-sampled landscape credibility, which we think qualifies our working models. These models and transects typify the intertidal ecosystem of the national park, and illustrate the tidal change, all types of boats and their different draughts, tourists and their behaviour, sea animal species, plants, corals, etc. They are detailed enough for all aspects of analytical thinking, subsequent design work, and related proposals for park management. What we are able to show by our study of Bunaken Island is that increasing visitor numbers cause cumulative environmental stress. In this regard, one of the most problematic current practices is individual boat transport to the many island resorts. On arrival and departure, each visitor tramples repeatedly through the sensitive intertidal zone, plus several times a day when going snorkeling and diving. In addition, all luggage and dive equipment are carried in this detrimental manner. Our visualization of the circumstance that only relatively few boats approach the main jetty of Bunaken Island, compared to the large number of boats travelling to and from the individual resorts, speaks a clear language concerning the inevitable environmental damage. Not to mention what is going on underwater. It is a highway down there, and every single dive tourist that we monitored during two weeks touched the reef many times — a taboo for any conservation-conscious diver. But it is the officers of the Bunaken Marine National Park Office themselves who take the biscuit. For park advertising purposes — rather than for deterrence — they display a vast collection of visitor photos, showing grinning snorkelers underwater, holding on to — as a matter of fact — the reef. The snorkelers come in the hundreds of thousands, and they all touch the reef.

One of our central project proposals is to diametrically change the organization of the current transportation system from a sea-centred to an island-centred system. Instead of transporting visitors and goods through the reef flats, seagrass meadows, and mangroves, a few reef-compatible but large jetties must serve as contact points. From there, all dive and snorkel spots can be reached without putting strain on the reef. Countless boat landings at the resort beaches have increasingly perforated the existent mangrove belt. These improvised entranceways must be closed, and the mangroves, serving as indispensable nursery grounds for fish and other aquatic organisms, as well as exemplifying the inter-connectedness of all elements in an ecosystem, have to be restored. The underlying logic is plain: no mangroves — no fish stock; no fish stock — no dive tourism; no dive tourism — no income. The quality of the bumpy island street can be easily improved, and likewise all other items of the comprehensive catalogue of land- and water-related design and management measures, developed by the studio group, are made to contribute to the future resilience of the national park. To name a few — offshore, strategically placed mooring buoys will reduce destructive reef anchoring of diving boats, while boat marker buoys will indicate unnavigable and protected reef zones. Snorkel marker buoys, not dissimilar to established swimming lane demarcation, will stop snorkelers from damaging the reef with their fins and hands. Such measures, in fact, will only be enforceable by a well-equipped park ranger team, which would have to be established from scratch. In the future, we must find a way to turn the current damage zone into a conservation zone, without compromising the touristic business in the national park. The proposed package of measures will not be implementable in a quick and easy manner, and it calls for long-term commitment and a participatory process. Yet it will be worth the trouble, after all we deal with a paradise, one of the most species-rich places in the world. 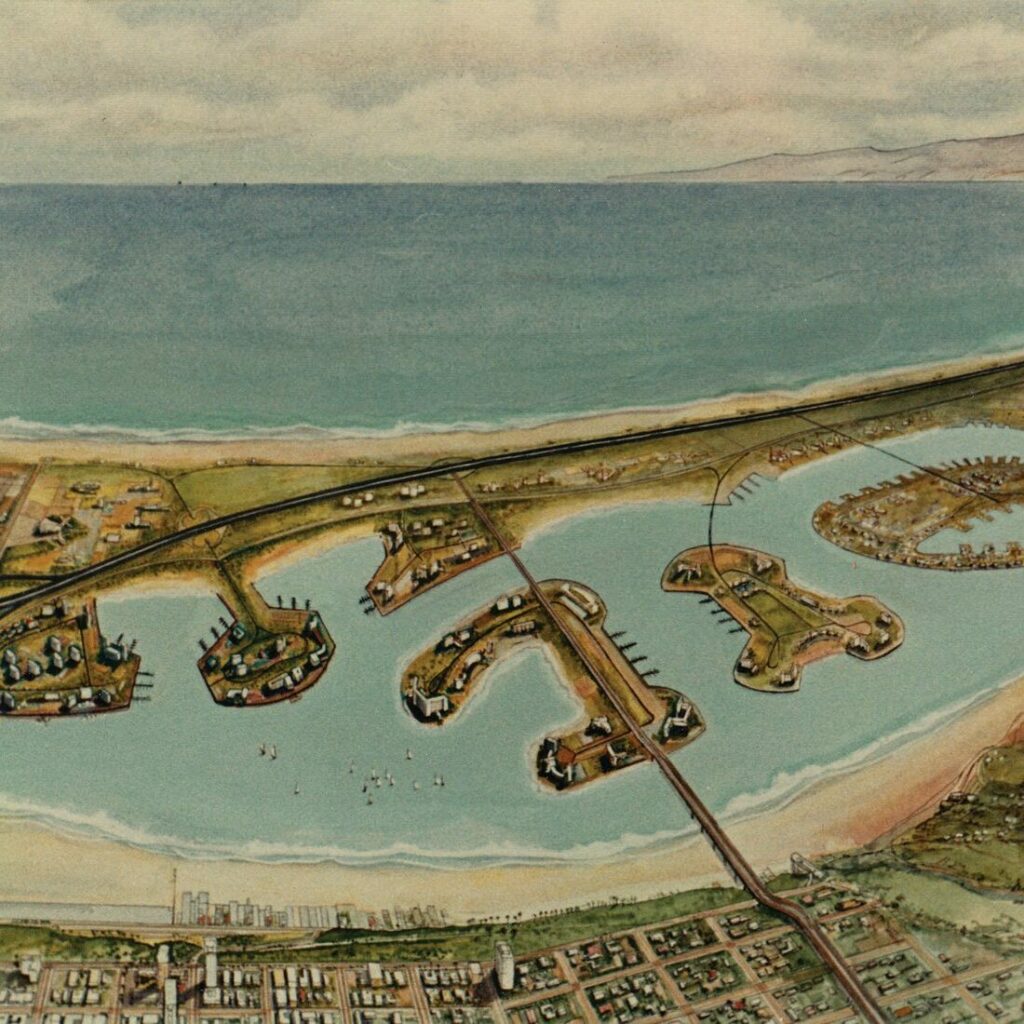 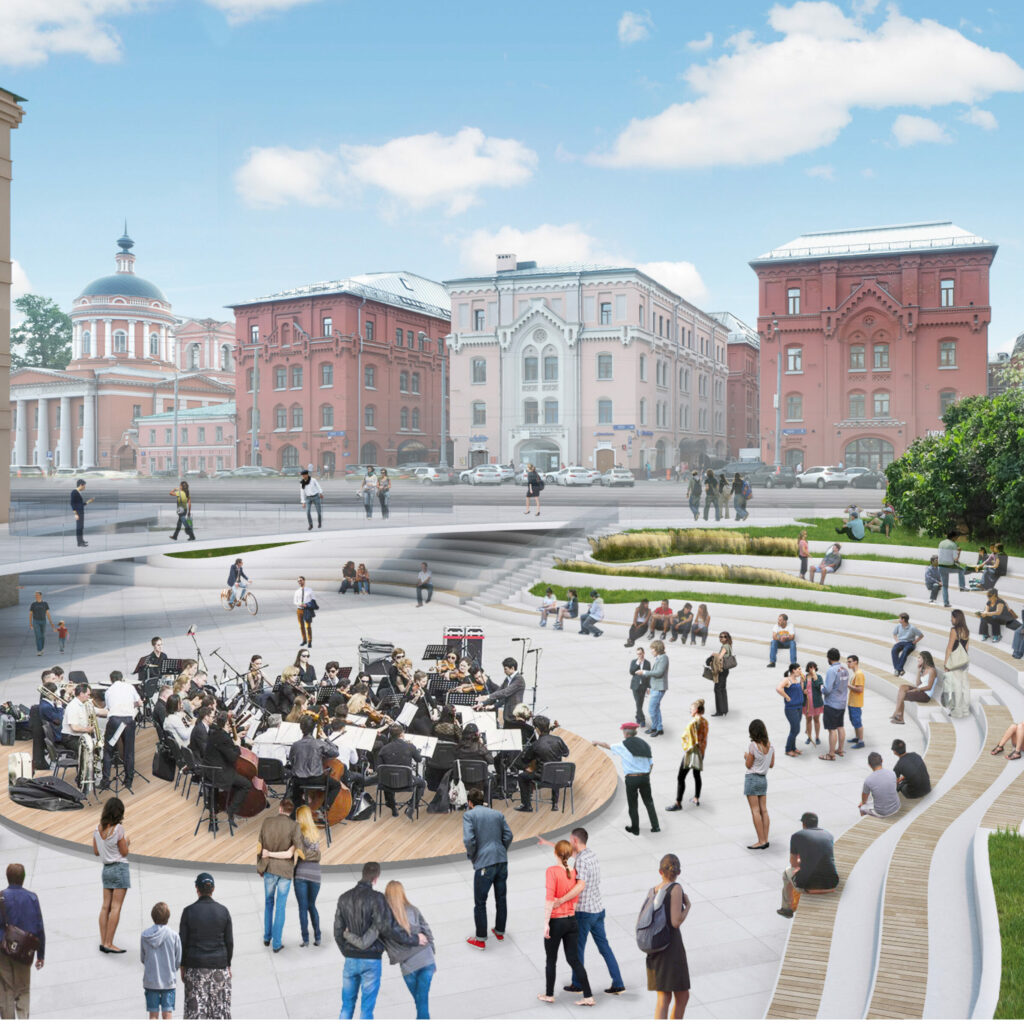 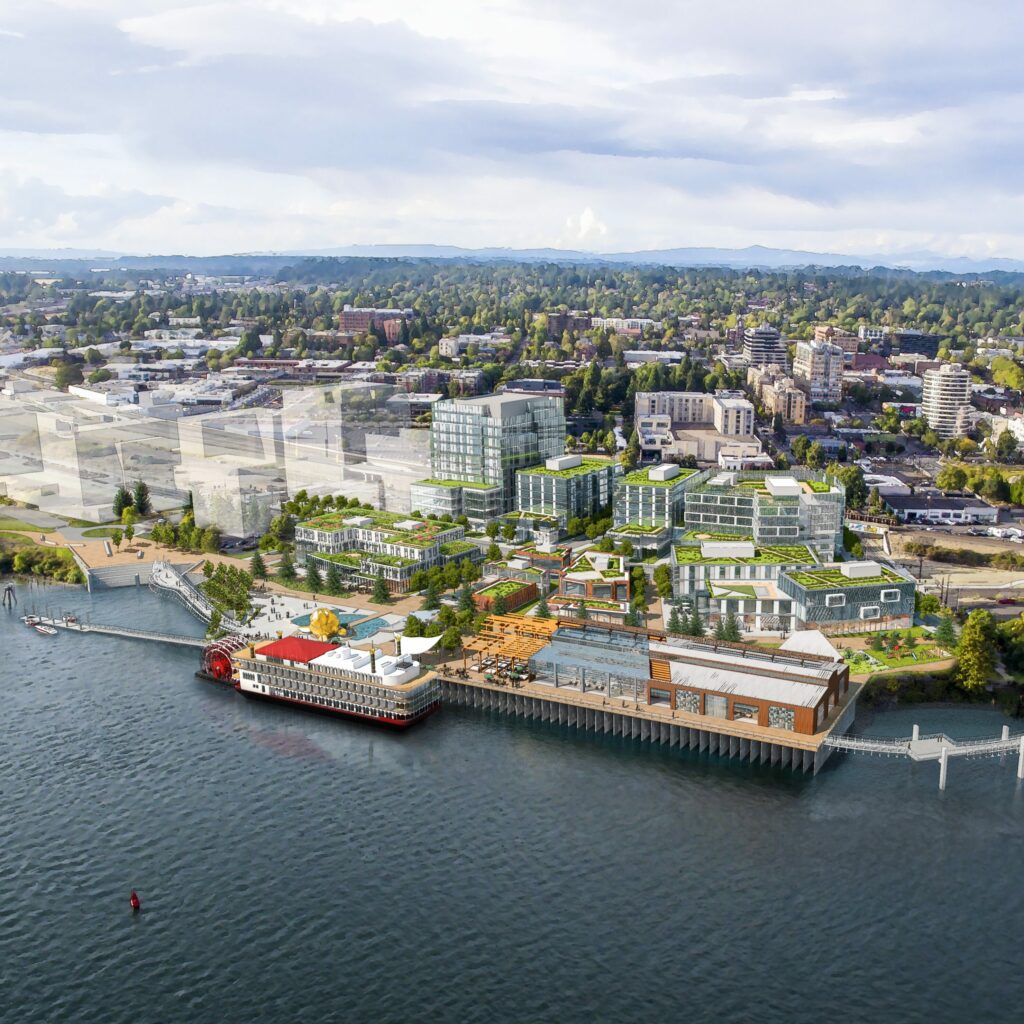 A new airport will soon be built in Tianjin, China. Nothing special about it. Unless the future users are exclusively birds.

The site is located on one of the most important migration paths for birds (Pictures: McGregor Coxall).