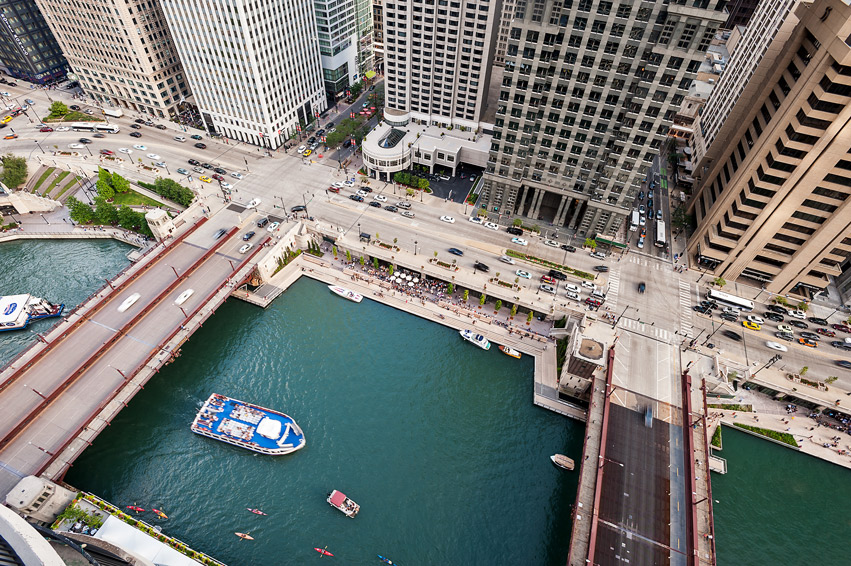 In Chicago, the new Maggie Daley Park and Chicago Riverwalk exemplify the trend for cities to build high-profile works of landscape architecture.

In Chicago, the new Maggie Daley Park and Chicago Riverwalk exemplify the trend for cities to build high-profile works of landscape architecture to spur reinvestment in historic urban cores. In this era of decreased federal and municipal funding for such projects, private investment is increasingly called upon. As a result, and as a range of new spaces in Chicago demonstrate, the landscape architect has emerged as a mediator between commercial interests and civic responsibilities.

High-profile landscape architecture projects are by now obligatory tools for American municipal governments seeking to attract investment dollars and jobs. The narrative of outmoded infrastructure or former industrial land turned park is by now well established and the discipline of landscape architecture has emerged as a leader in their design. Catalyzed by these new public spaces, American downtowns and nearby neighborhoods are experiencing what the popular press and scholars alike herald as a “return to the city” or an “urban renaissance.”

But whose renaissance is it? Who is returning? It is urgent to frame these spaces historically and geographically to take stock of the effects recent works are having on the spatial, social, and ecological dimensions of American cities. Reframing the urban as a multi-scalar process producing historically specific moments of urbanization, not just a politically bounded aggregation of individual objects, helps productively complicate this popular narrative.

The Right to Open Space

Chicago typifies the aforementioned changes. However, when considered against the backdrop of the city’s civic-minded 19th- and 20th-century public open space and infrastructure projects, its recent landscape transformations beg questions regarding agency, equity, and design. From the city’s very inception, Chicago’s citizens and civic leaders demonstrated a precocious awareness of the value of open space. On an 1839 map drawn up by Canal Commissioners, a portion of the Lake Michigan lakefront was set aside as open space and labeled “Public ground forever to remain vacant of buildings.”

It eventually became Grant Park and its status as an open and free space is protected by law. Likewise, an ethos of publicness pervades Burnham and Bennett’s 1909 Plan of Chicago, which to this day has an astonishing influence on local planning and design decisions.

With its legacy of equitable open space and strong record of consistently building infrastructure, parkland, and architecture of significance, the latest era of Chicago parks is a locally specific version of national trends. […] 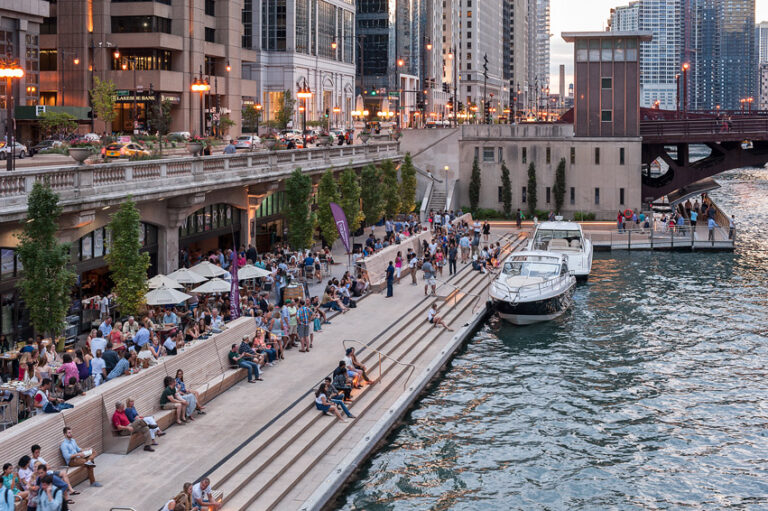 The opening of the Chicago Riverwalk coincides with an increase in tourism and recreational activity. 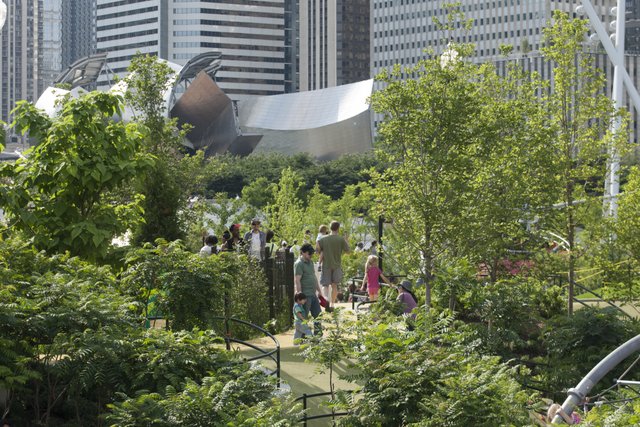 The park is a premier regional destination for families with young children. Photo: Scott Sighley 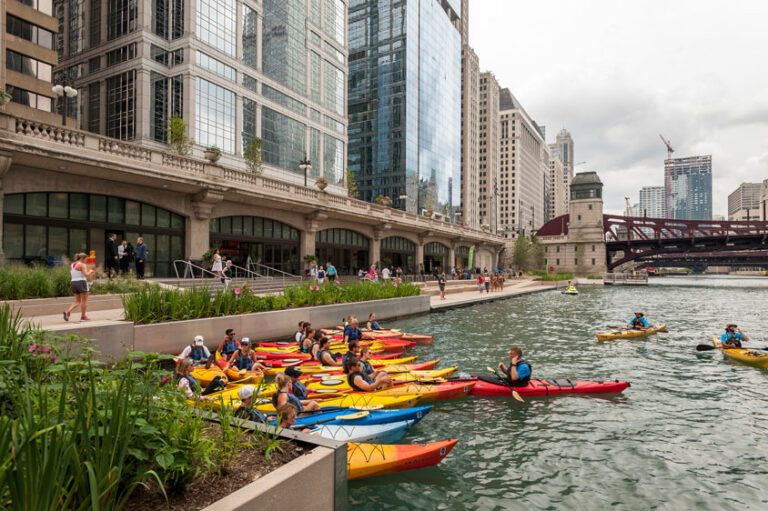 By removing barriers next to the water's edge, designers encourage direct engagement with a cleaner Chicago River. 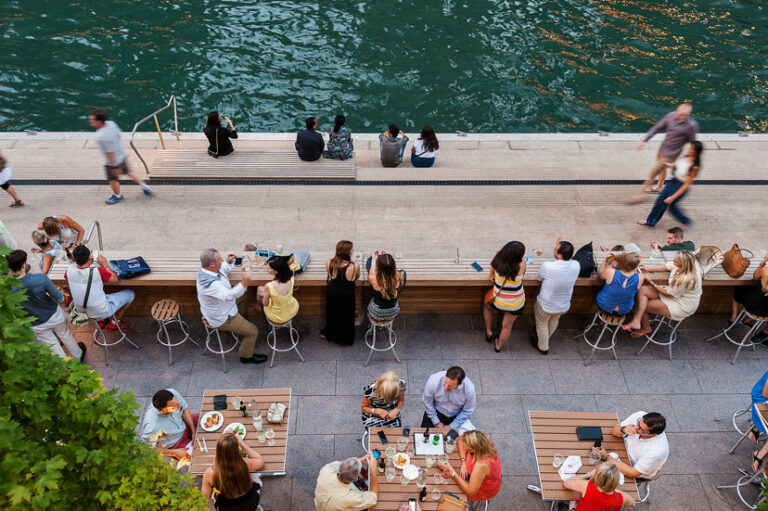 Commercialization overpowers Chicago's civic aspirations at the "The Marina Plaza". 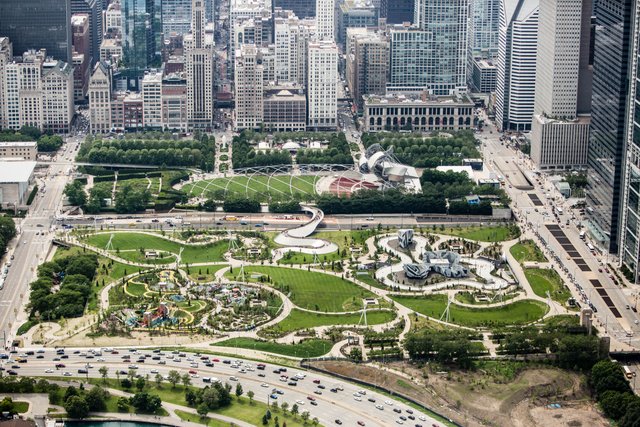 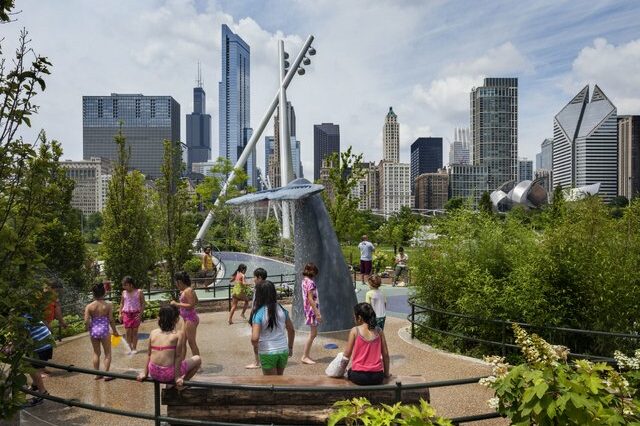 Maggie Daley Park is a welcome exception for the Beaux-Arts formality of Chicago's Grant Park.

As a Master of Landscape Architecture degree candidate at the University of Illinois at
Urbana-Champaign, Michael Van Valkenburgh proposed a thesis investigating aspects of children’s play in Urbana’s Carle Park. Thirty-six years later and 130 miles northward, his trademark passion is unmistakable in the colorful carnival of custom-designed children’s playground equipment at the new Maggie Daley Park. The topographically rich 28-acre park, which opened in December 2014, is already a premier regional destination for families with young children. Connected by Frank Gehry’s BP Pedestrian Bridge to the west, it is an accessible counterpoint to Millennium Park.

The Bridge to Nowhere

While Millennium Park filled in the northwest corner of Grant Park and helped fuel a flurry of investment in its vicinity, Maggie Daley Park supplanted an existing park: Daley Bicentennial Plaza. The park replaced a below-grade parking lot in 1976 and was formally consistent with Burnham’s early 1900s Beaux-Arts vision for Grant Park: outdoor rooms created by formal allées of trees and ornamental flower beds. As Millennium Park’s popularity soared, Daley Bicentennial Plaza persisted as a quieter retreat for neighborhood residents. Aside from major city festivals like Fourth of July fireworks gatherings, the area was so subdued relative to Millennium Park that Gehry’s bridge was dubbed “the bridge to nowhere.”

By the mid-2000s the leaking roofing membrane of the garage beneath Daley Bicentennial Plaza needed to be replaced. After the City of Chicago privatized four Grant Park parking lots in 2006, $65 million were set aside for building a new garage and rooftop park and an invited competition was held for its
redesign; construction on the winning scheme by Michael Van Valkenburgh Associates began in October 2012. […]

For more information on the Riverwalk and Maggie Daley Park, read on in Topos 94 – City Visions. 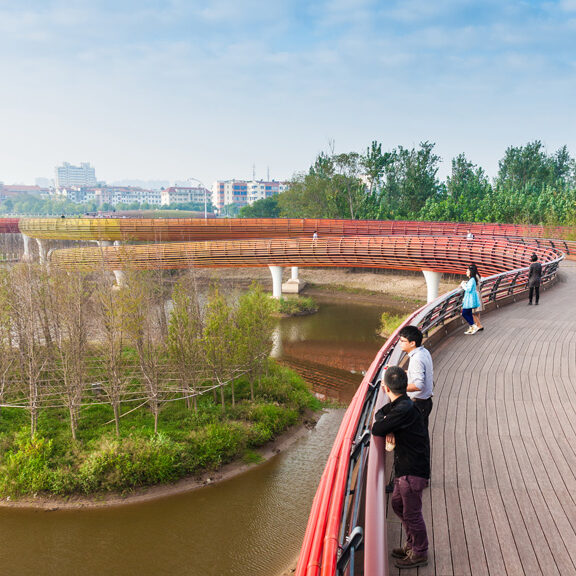 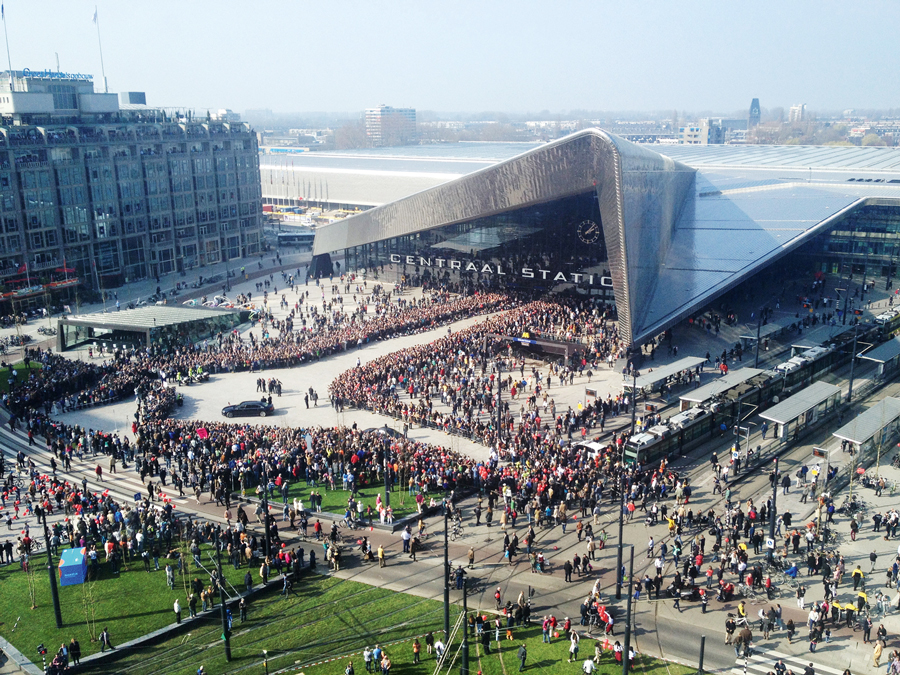 Copenhagen has a new piece of bicycle infrastructure. The so-called “Cykelslangen”, the “Bicycle Snake”, is a cycle superhighway that increases the ease and efficiency of daily commutes in the city.

The Bicycle Snake is heavily used day and night and evokes a freedom of speed for the cyclists. It also allows a glimpse into the various characteristics of Copenhagen.