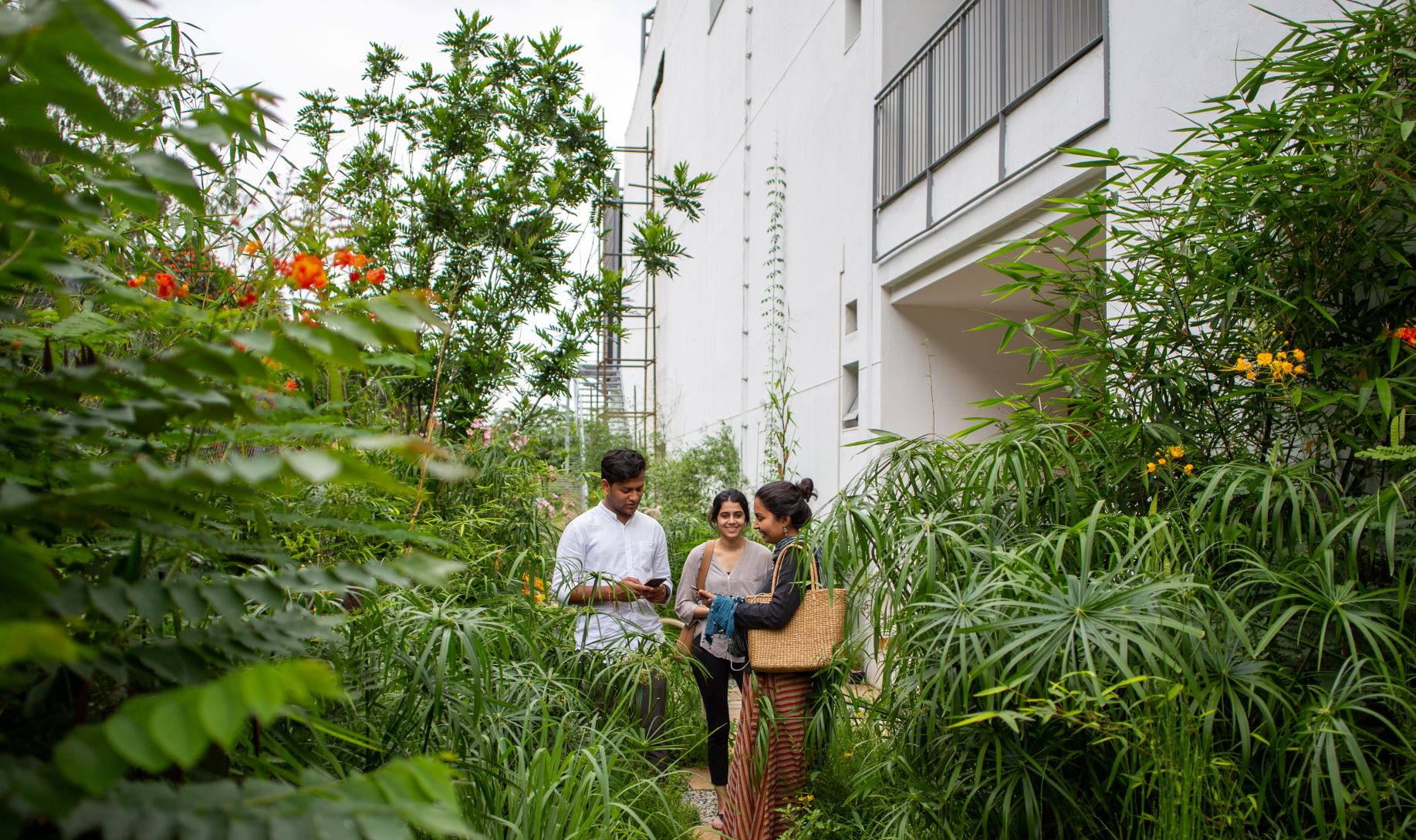 VSLA designed the outdoor spaces of the Bengaluru International Centre in order to address these challenges to sustainable urban development.

The new outdoor space includes a rain garden that is intended to function as an urban ecosystem.

How to create a cultural centre for an urban neighbourhood on a site with limited available space and subject to environmental pollution? The landscape architecture firm VSLA and its head Varna Shashidhar designed the outdoor spaces of the Bangalore International Centre in order to address these challenges to sustainable urban development in India’s third most populous city.

Since its opening in 2019 the Bangalore International Centre (BIC) has become a vibrant public institution for sharing and discussing ideas across cultures, regions, societies and economies in Bengaluru. The city is a centre of India’s IT industry and resulting migration to the city reflects the nation’s diverse cultural heritage. The BIC is situated on a longitudinal site spanning 1 acre in a dense urban setting that is surrounded by neighbourhoods and bordered by an existing park and the Nala, the city’s stormwater channel. The community space includes indoor facilities including a 185 seat auditorium, seminar rooms, gallery, café and related spaces. The remaining open space was, therefore, limited and also affected by environmental pollution. How did the designers respond to this challenge in Bengaluru?

The existing site left only a limited amount of open space for a community park to complement the BIC. In addition, due to its setting in a dense residential neighbourhood with some of the highest noise levels in the Bengaluru-city, the park was situated between the community building and the stormwater drain. However, this choice also required dealing with a completely different challenge. The soil on this part of the site comprised a high degree of pollution and degradation. The constant seepage from the Nala exacerbated this situation, since the stormwater channel comprises water that is highly polluted by raw sewage and waste. During the summer months, the waste stagnates – not pretty to look at, exuding foul odours and attracting mosquitoes. The design aim was clear: to ameliorate the existing and mitigate any future environmental pollution by creating an ecological corridor that could serve as an amenity for both residents of the surrounding neighbourhood and visitors to the centre. 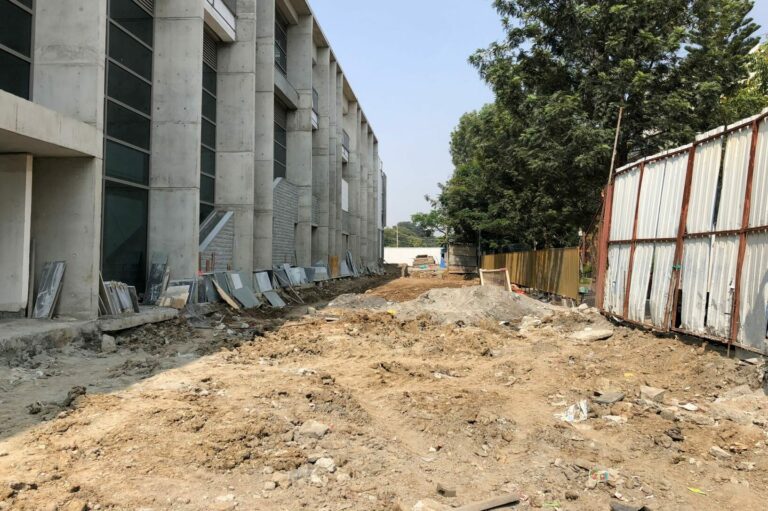 The outdoor area before the redesign 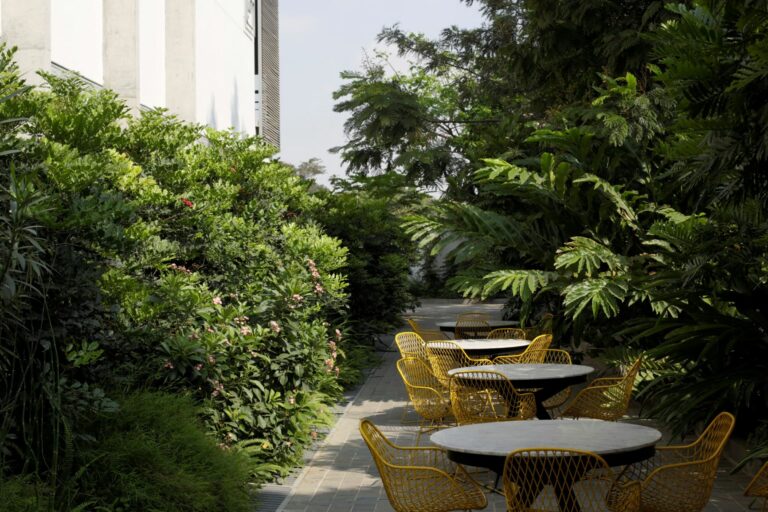 The new linear garden begins in the front of the community centre... 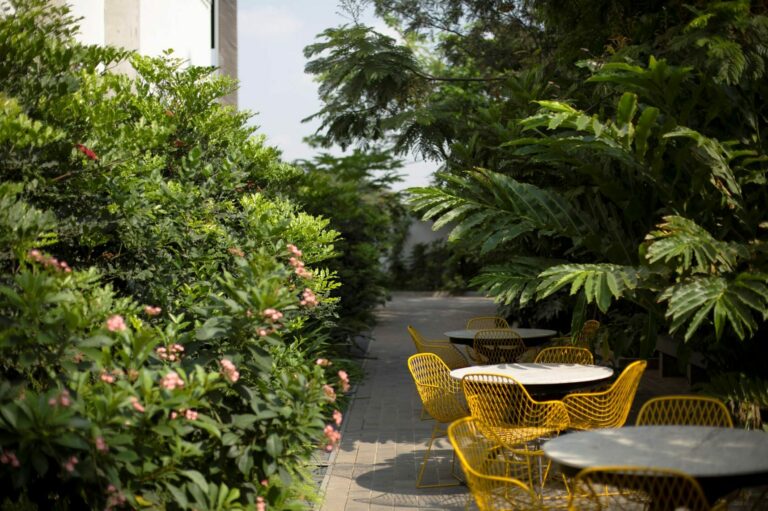 ... and utilizes the limited open space available for this purpose. 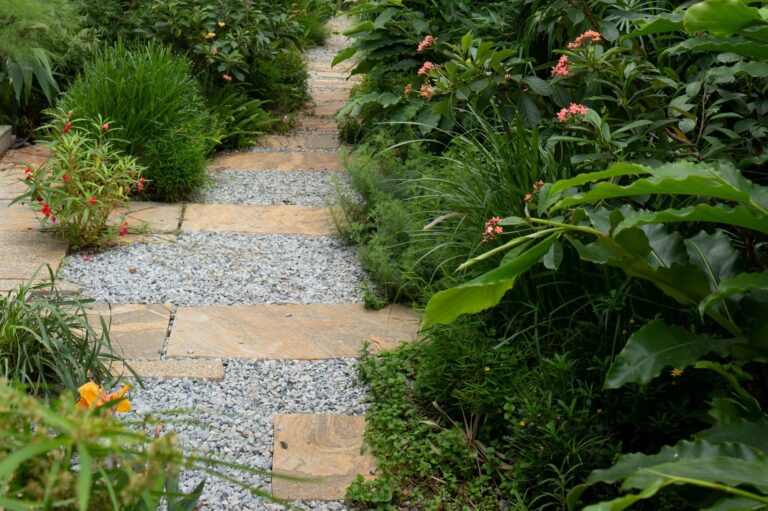 VSLA created a performative landscape that contributes to and strengthens the urban ecosystem and is attractive to human and non-human occupants. Among the latter are various species of mammals and birds that are extant in the urban setting. An ulterior goal was to connect this community garden with the many other parks and open spaces in the vicinity, thus creating a riparian buffer along the Nala. The creation of this landscape therefore went beyond site constraints and design aesthetics in order to establish its function as a public amenity that enables environmental remediation. For one, visitors are encouraged to actively engage with the outdoors of the community centre. For this purpose, the centre’s open spaces were structured into a linear public garden along one side of the centre and a permeable linear greenway facing the Nala along the centre’s eastern perimeter. Both are complemented by a surrounding buffer landscape.

The linear garden begins in the front of the community centre and utilizes the limited open space available for this purpose. It comprises 1.5 metres wide linear bands of greenery that offer a whimsical landscape experience. Occupants inside the building can enjoy its view while those in the outdoors can relax here. The linear garden features longitudinal monolithic stone benches and colourful outdoor furniture for seating and waiting. The paving of this area is comprised of local granite cobblestones with subtle variations in terms of texture and colour. It is accessible to disabled and senior visitors. The buffer landscape includes a pond that provides a cooling effect, carried by breezes into the centre’s lobby, facing the pond. The planting of the buffer and pond area was designed to allow visitors in the lobby to feel its presence while shielding off the traffic from the nearby street. 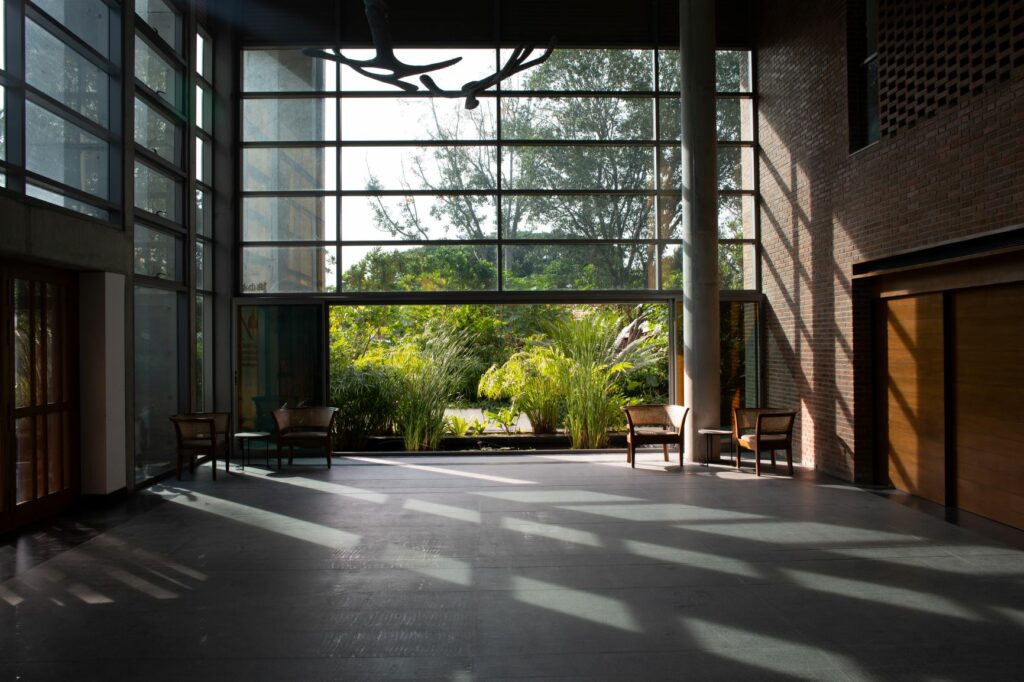 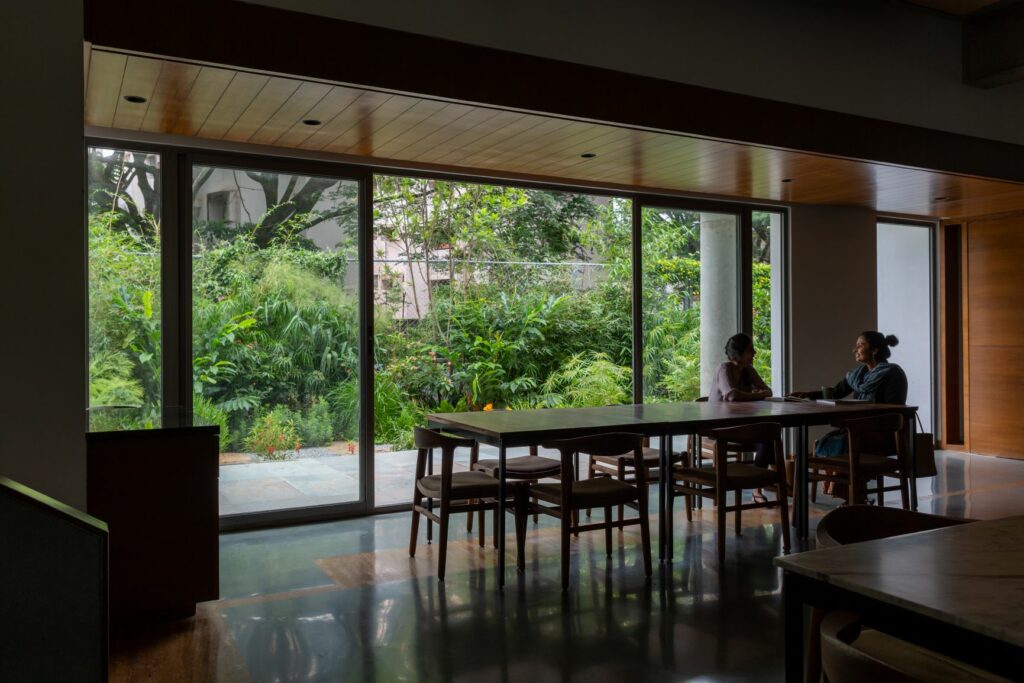 The linear greenway following the Nala includes a rain garden that is intended to function as an urban ecosystem. The formerly environmentally polluted and degraded site now attracts a variety of mammal and bird species that share the urban setting with its human residents. The linear greenway also offers an escape from the urbanised environment surrounding the centre in the heart of this bustling Indian metropolis. The open space features a meandering walkway consisting of local, dry laid chappadi stones (a form of gneiss) alternating with crushed gravel paving. Visitors in Bengaluru can take a break here from community centre activities, conferences and performances. The linear greenway is a performative landscape, a rain garden that enables biological filtration which improves stormwater quality through the exposure to dense vegetation, gravel and soil. Water is filtered through these layers and enters a perforated sub-drain, thereby reducing the degree of pollution of the Nala. 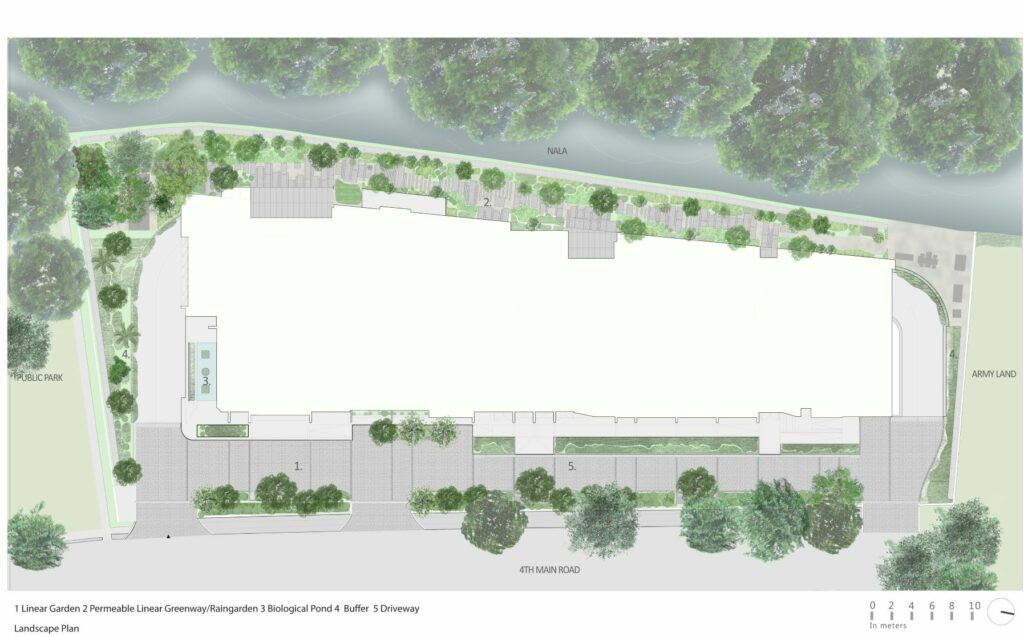 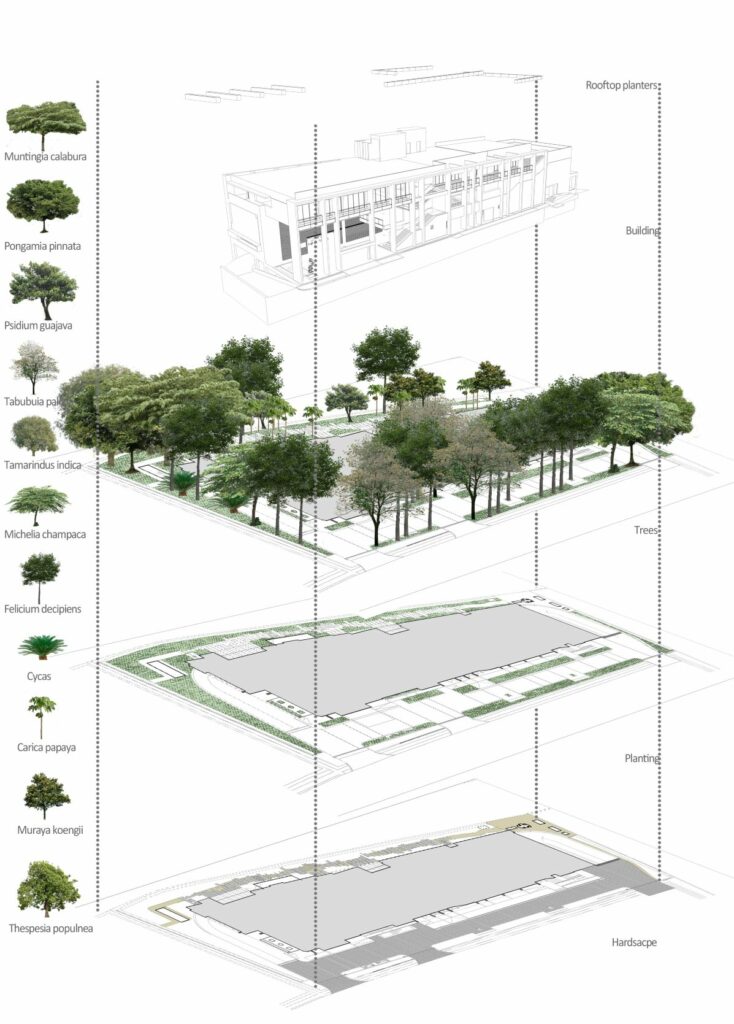 The linear greenway in Bengaluru features a selection of plants that serve to support its filtration functions and remove pollutants from stormwater, such as Cymbopogon (commonly known as West Indian lemon grass), Nerium oleander and Cyperus alternifolius (umbrella palm). The planting density and diversity further enhance filtration functions. The selected species are capable of withstanding the stress produced by the urban surroundings and require minimal maintenance. In Bengaluru the aesthetic outcome of the design is a variety of textures and fragrances in relation to seasonal colours. Native and adapted species were used exclusively, exotic planting was omitted. The landscape design also adds a whimsical experience to the pristine architectural expression of the community centre building. Overall, the landscape architecture of the BIC offers a rich garden experience on a small site while providing environmental remediation and stormwater management, reducing urban heat island effects, buffering noise pollution and supporting biodiversity. Based on these characteristics the project was submitted for a GRIHA 5 star rating, the Green Rating for Integrated Habitat Assessment. 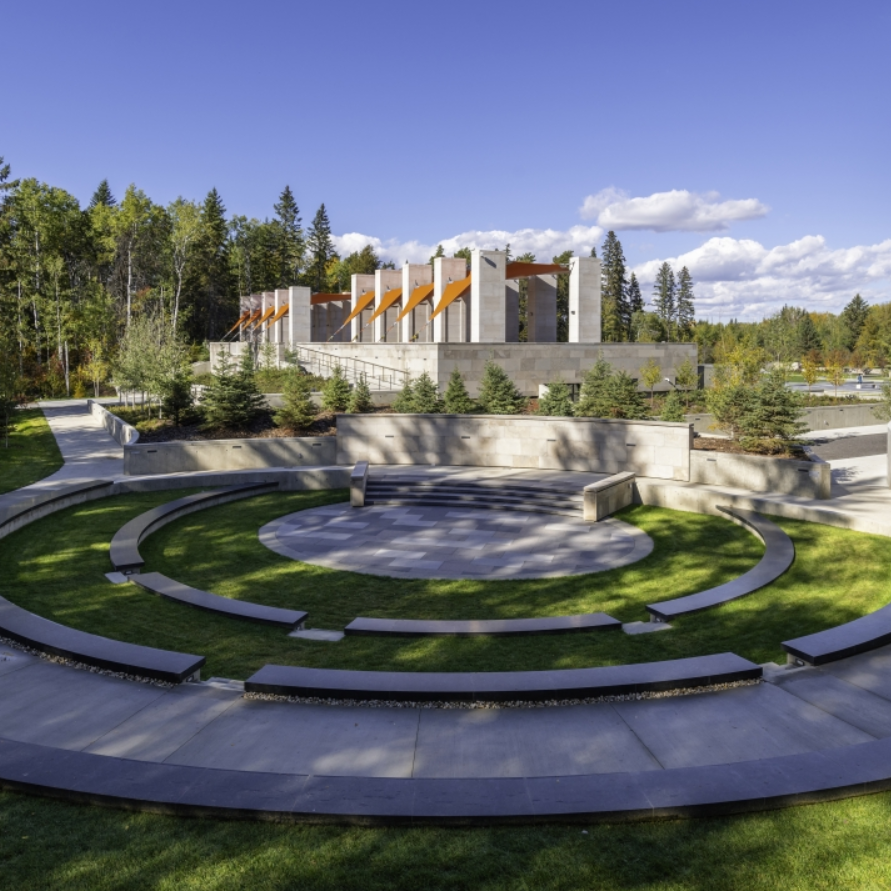 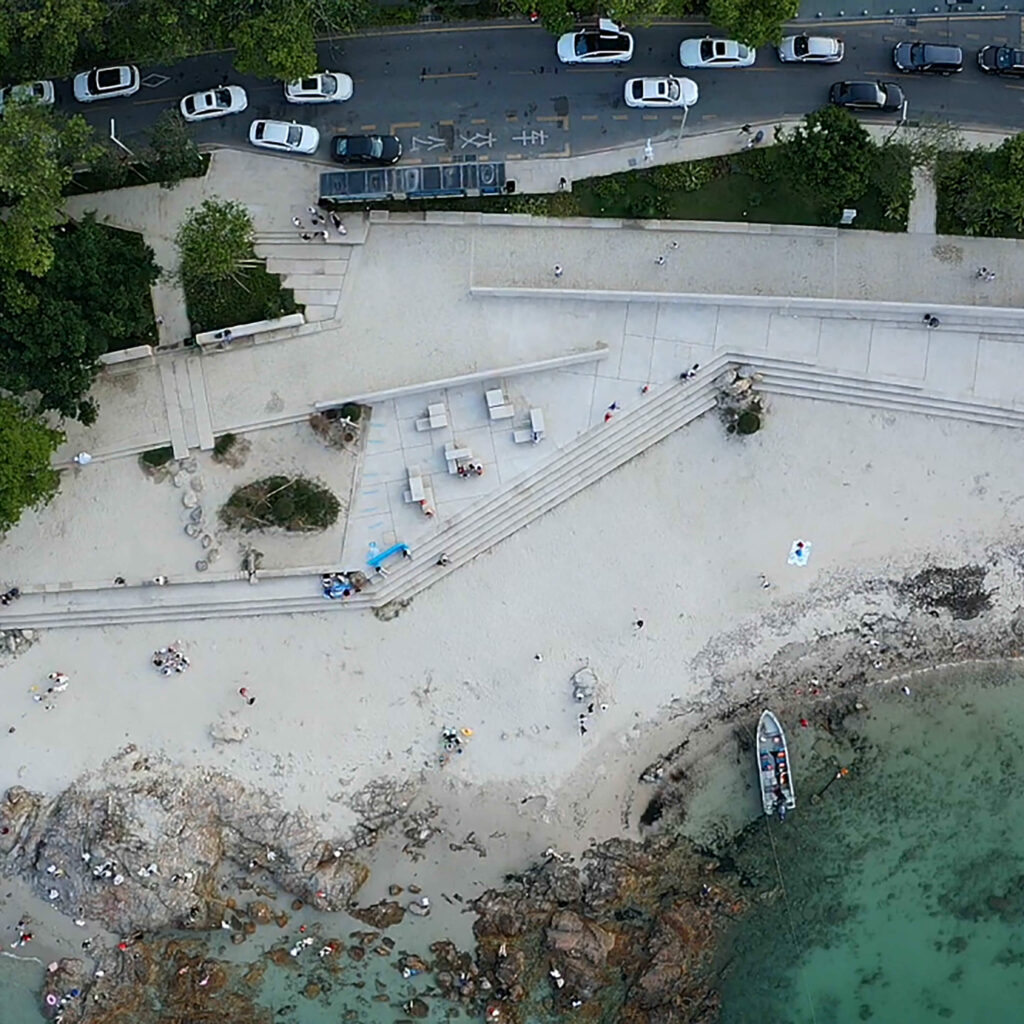 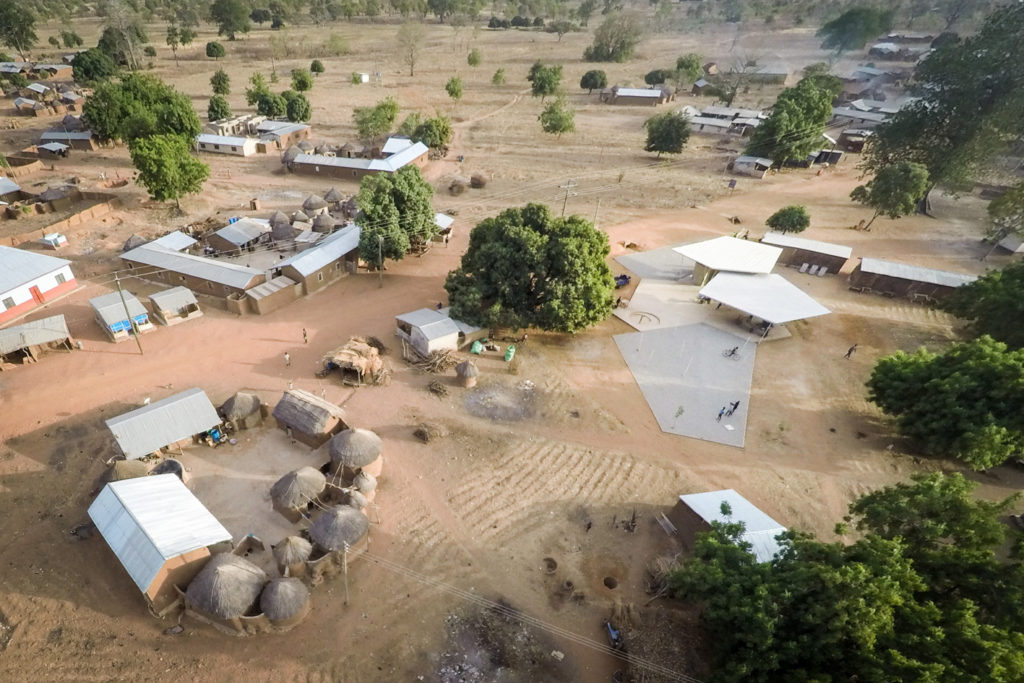 Carve, a Dutch Architect’s practice, designed a ‘playground in the clouds’ on the rooftop terrace of Marmara Forum, in Istanbul.

The new playground on the rooftop terrace of Marmara Forum, 24 metres above street level. © Carve