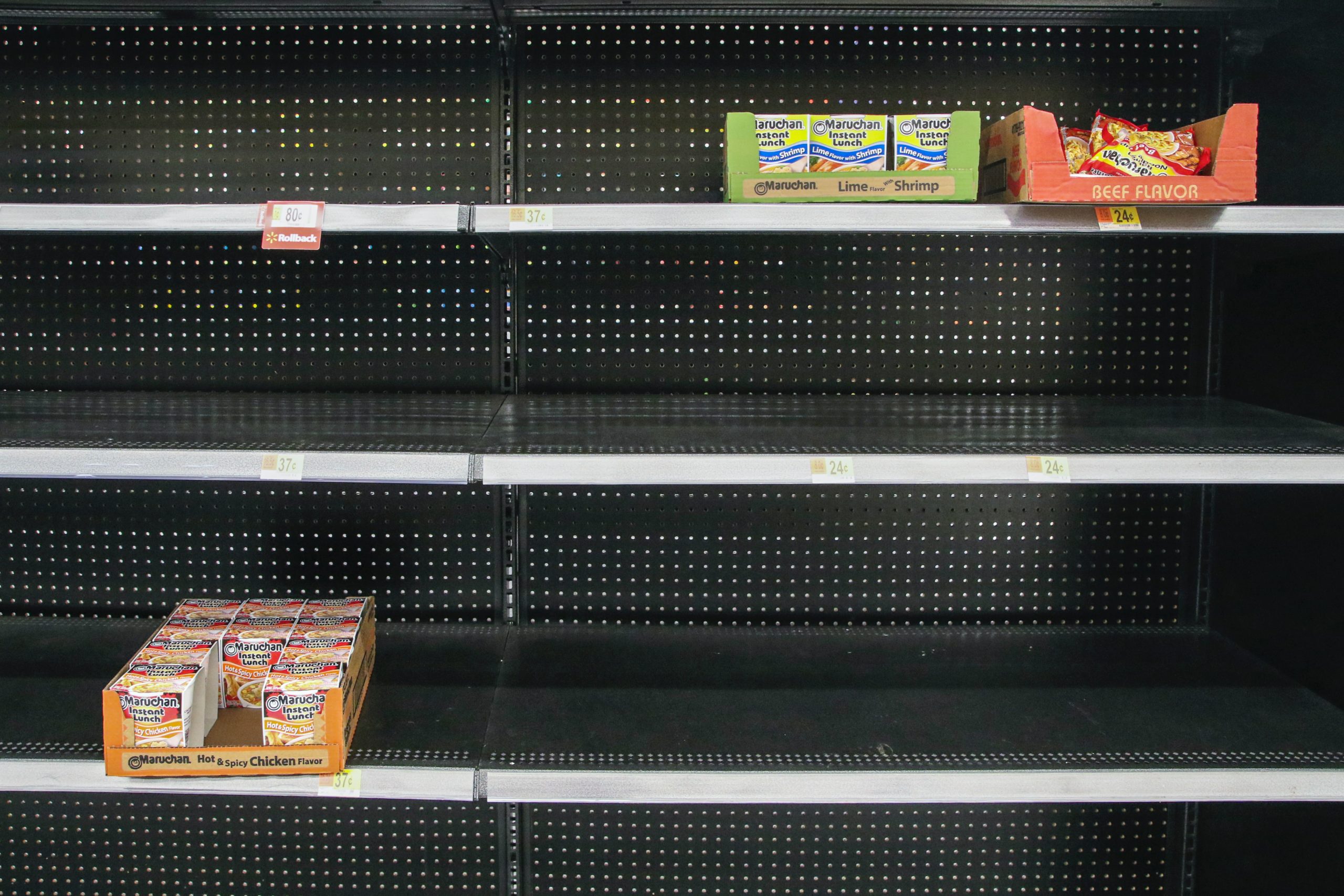 Empty shelves in the supermarket during the corona pandemic: These empty shelves expose supply chain problems that run much deeper than the current crisis.

Many people’s first encounter with the Covid-19 outbreak was in the supermarket, but empty shelves expose supply chain problems that run much deeper than the current crisis.

Like most people, my first direct encounter with the Covid-19 crisis was in a supermarket. One weekday in the first half of March, I went to pick up a few things at my local Lidl in Osdorp, Amsterdam. Nothing out of the ordinary, but as it happened, we were low on toilet roll. When I went to get some, I saw several people picking up the 24 pack they had on offer. One person was carrying two of these jumbo packs. I’m embarrassed to say that the sight of literally hundreds of toilet rolls leaving the store in a matter of minutes, coupled with the stories of panic-buying I’d seen and heard about in the UK and the US, moved me to pick up a pack myself.

A few days later, on Friday 12th March, the first lockdown measures were introduced by the Dutch government. Shelves were practically empty in many supermarkets by the following morning. Since then, most stocks have been replenished (flour being one of the notable exceptions, apparently even the suppliers of the supermarkets ran out of it), but subsequent trips have remained charged with a new significance that’s somewhat hard to deal with.

I’m no stranger to fraught supermarket encounters. To be honest, I’ve always found the supermarket a pretty anxiety-inducing space. Maybe it’s the lack of light, or the fact that too much choice stresses me out. I’ve never felt comfortable around such conspicuous abundance. But the feeling that everyone else around me is also equally on edge doesn’t help matters.

For most people in the West, there’s clearly something quite disturbing about empty shelves. Until recently, most of us had come to see them as a thing of the past, or perhaps associated the image with shops in the Soviet Union, and other socialist countries of the past and present. Which is to say, we think of the phenomenon as a product of systems beset by scarcity. It’s this association that has undoubtedly fuelled a number of laughable attempts to displace our own system’s recent failings, by casting it as a momentary taste of what life would be like under a socialist system. But the sudden surge in demand caused by the Covid-19 outbreak is not a momentary taste of life under socialism. Nor is it a sign of the greed of what is likely only a small number of hoarders. Rather, it’s an emphatic expression of the fragility of our entire economic model.

The problem with distribution

In an article on this subject for Novara Media, Craig Gent quotes a recent statement made by the CEO of British supermarket chain Waitrose made on BBC Newsnight. “The supply of goods, the manufacture of food, is in good shape. There isn’t a problem there; there is enough food. […] The challenge that the supermarkets are facing at the moment is getting that food into their distribution centres and then having enough space, and having enough lorries and drivers to get it to the shops, and then being able to keep it on the shelves.”

This is a pretty accurate explanation of the essential requirements for our system’s “just-in-time” supply chains to function properly. It’s not about the availability of food, but its distribution. Just-in-time supply chains are principally concerned with maximising efficiency (and profit) by minimising waste: of space (e.g. goods sitting in costly storage facilities); and time (e.g. workers spending too long delivering or processing those goods, or demanding too high a price for their labour). This goal, to trim all the excess fat from a supply chain, to make it as “lean” as possible, works very well when everything else in the system is ticking along as normal. But it leaves very little room for sudden unexpected shifts in consumption patterns: like when a large section of the population are suddenly compelled to stay home and stock up on supplies while the (normally critically undervalued but now all of a sudden “essential”) workers tasked with keeping the supply chains moving are reluctant to come out to work for fear of infection. 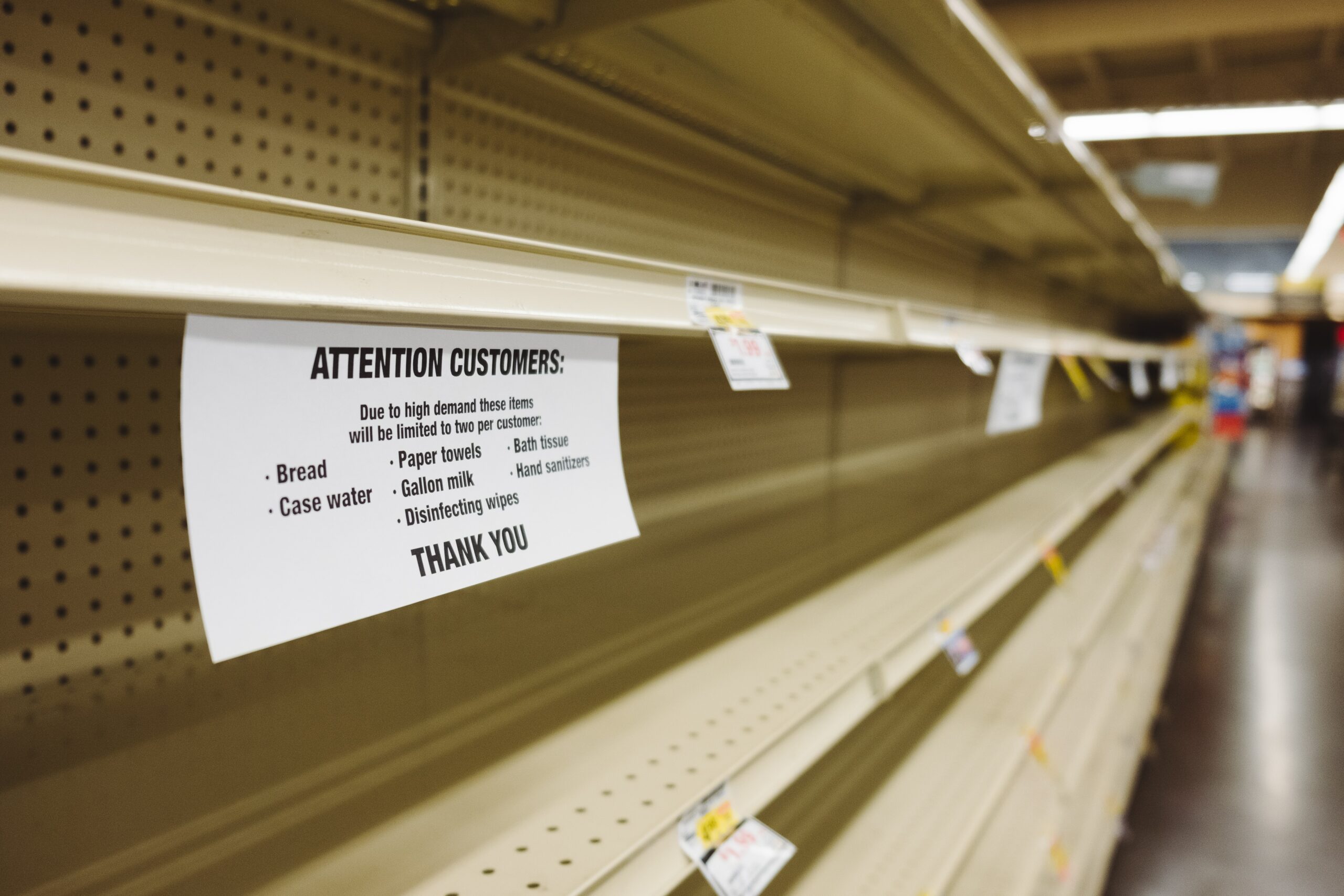 Supermarkets are trying to combat panic buying. Photo by Wesley Tingey on Unsplash

Another source of fragility is the thin spread of these supply across the entire globe. With containerisation and logistics innovations having dramatically reduced the costs associated with transporting goods from one part of the world to another, the materials and work contained within a single product can come from dozens of countries in different parts of the world before it reaches the consumer. Again, this is all well and good when the global economy is functioning as normal, but it seems critically short-sighted now that certain countries have been forced to reduce their economic activity drastically.

We’re only a few weeks into the current crisis, so we’ve probably only just begun to see serious changes in the availability of certain consumer goods (namely cleaning and medical supplies). But even this quick recap already makes me think that the supermarket as we know it is an historical aberration, fuelled by an astonishingly short-sighted and precarious global economic arrangement. 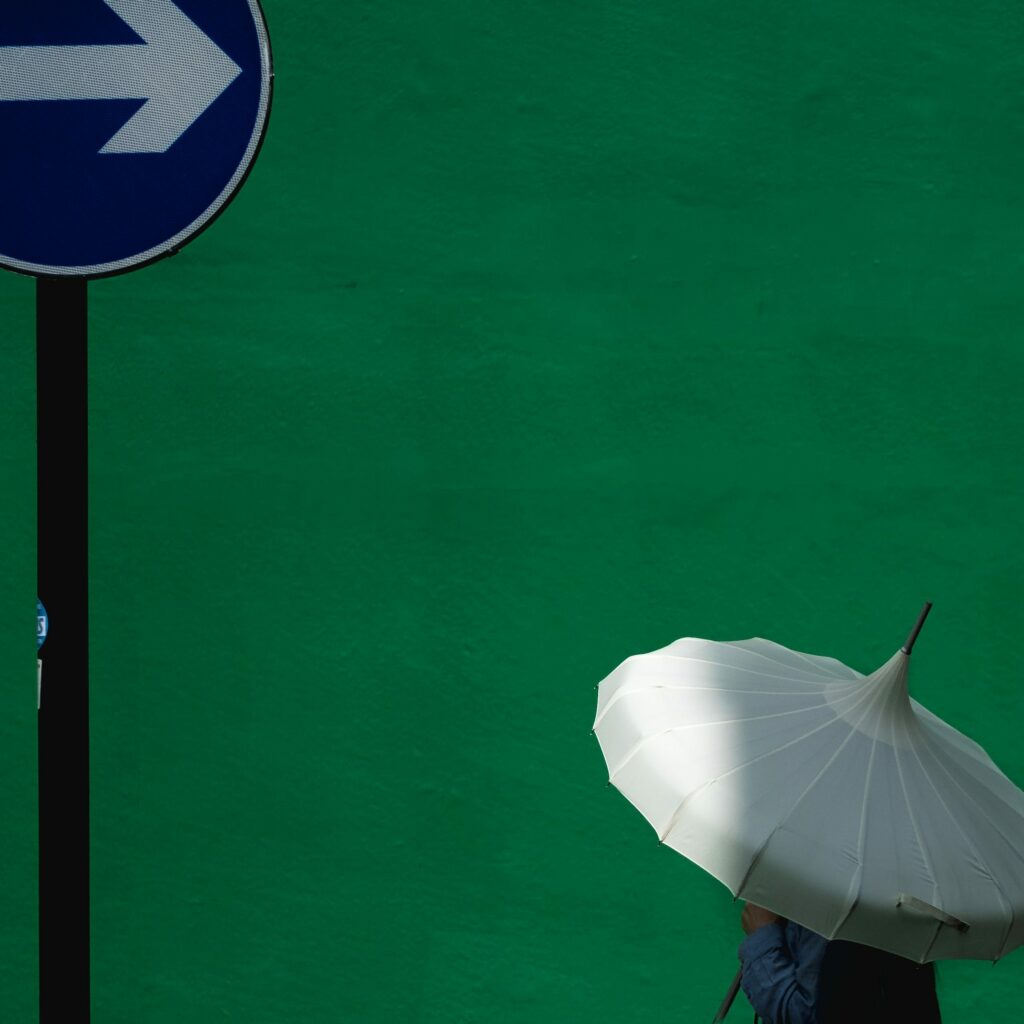 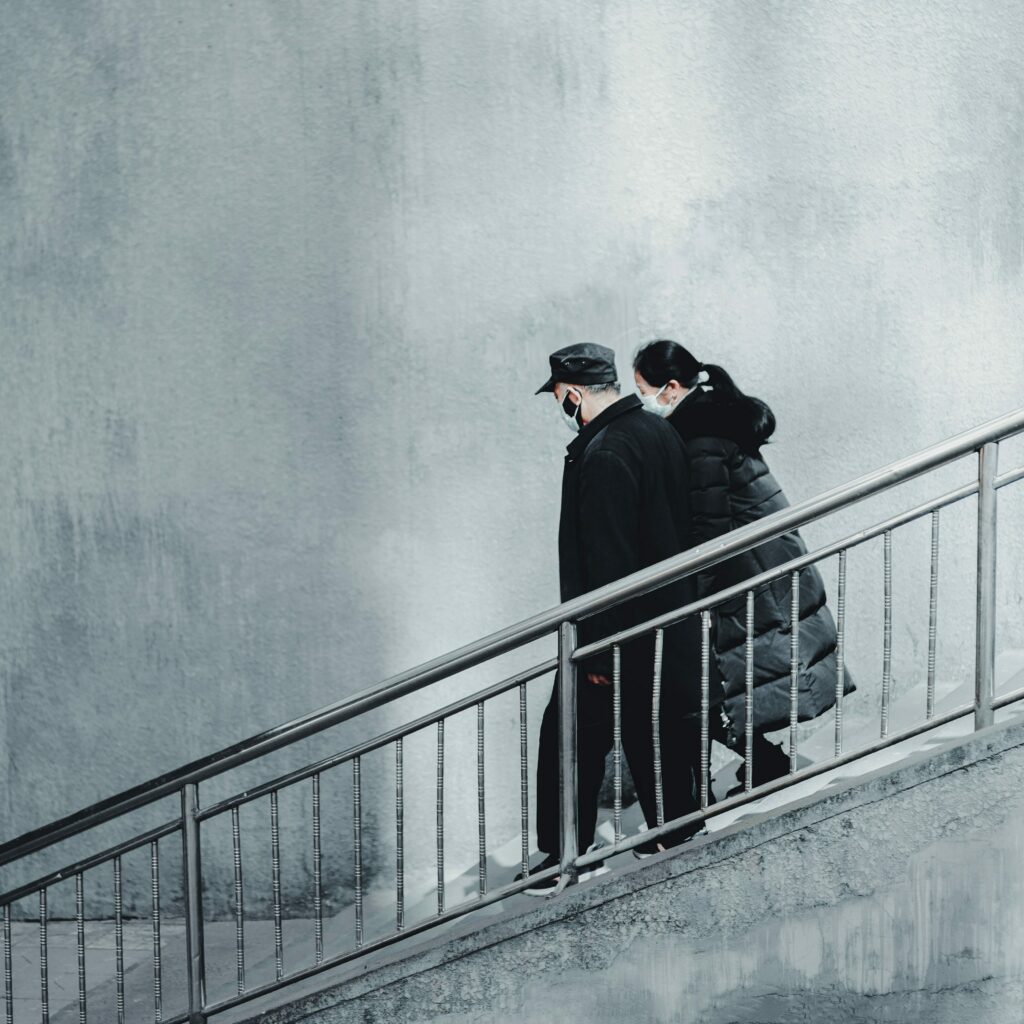 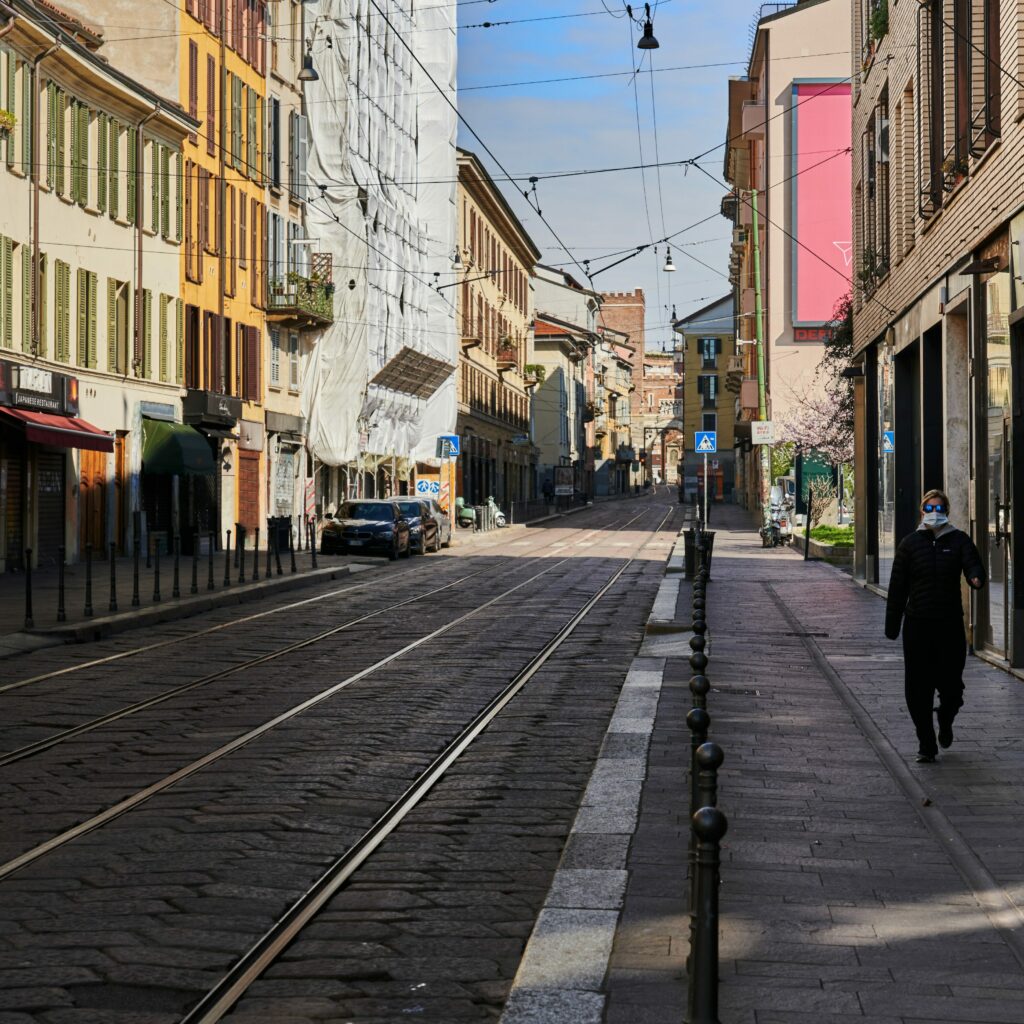