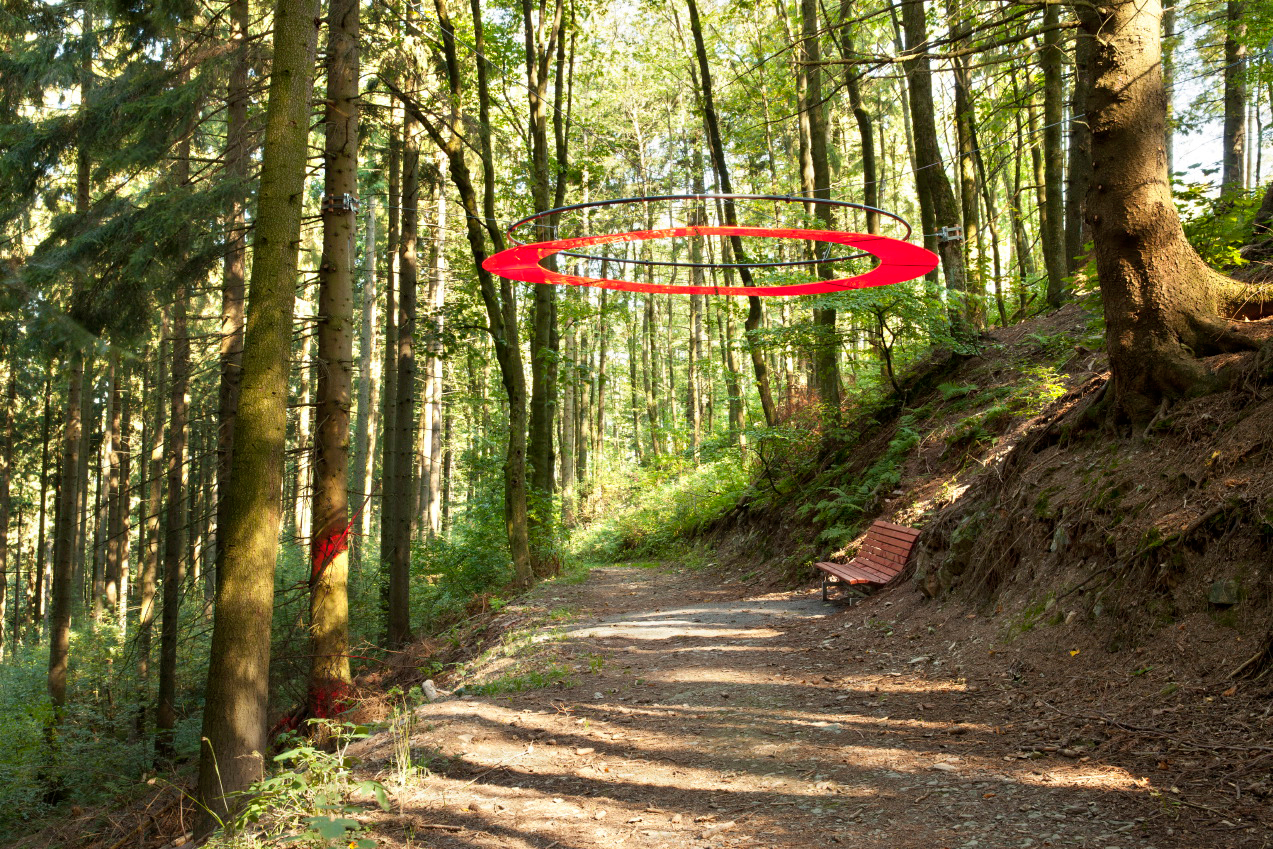 Planergruppe Oberhausen in cooperation with B.A.S. Kopperschmidt & Moczalla realized the project “Landscape Therapeutic Park” in the forests of Brilon.

The installation "Feenkranz" is made of fluorescent acrylic glass with a diameter of five meters, a particular technical challenge that called for a custom solution. (Photo Credit: Claudia Dreysse)

Almost three years ago the German landscape architecture office “Planergruppe Oberhausen” in cooperation with B.A.S. Kopperschmidt & Moczalla realized the innovative open space project “Landscape Therapeutic Park” in the forests of the German city of Brilon. The project includes a spa park, a forest park and a therapeutic walking loop spanning an area of 4.5 hectares. We spoke with the responsible landscape architect Ute Aufmkolk (Planergruppe Oberhausen) about the importance and potential of open spaces such as these.

Let us begin with a brief overview of the project: It is surrounded by an open, gentle meadow valley and wooded, steep forest slopes in a characteristic way. The aim of the design is to highlight precisely this contrast. The spa park (“Kurpark”) is centrally located and includes direct access to a lake. It is surrounded by flat, blooming meadowlands featuring a barefoot trail and a beekeeper’s hive. In contrast to the wide meadows, the forest park (“Waldpark”) functions as its “introvert counterpoint”.

The highlight of the forest park is the „therapeutic walking loop“. Thirteen stations are associated with human moods such as clarity, overview, openness, harmony, confusion, attentiveness, contemplation, transparency and sublimity. A landscape window (“Landschaftsfenster”) serves as a prelude to the loop. A wooden grotto bridge (“Grottensteg”) leads visitors past mystical caves and rock formations. Accompanied by the “fairy sounds” of an audio installation (“Feenklang”), the loop leads to five stances featuring a signature red paint finish. The view becomes even more impressive: the landscape architects transformed a former ski jump into a spectacular viewpoint including a swing. Passing a vitalizing re-naturalized spring, visitors reach the path-spider (“Wegespinne”). This is a place for resting or contemplating the loop’s many twists and turns. The loop continues through a dense forest, past a red shimmering fairy wreath (“Feenkranz”) and a poet’s clearing (“Dichterlichtung”), perfect for deep thought and reflection. Comfortable hammocks invite visitors to rest their tired legs at the end of an inspiring hike.

In your previous work you dedicate yourselves to different ways of making open space useable. What does open space mean to you, and how does this influence your planning and design practice?
For the Brilon project, open space certainly means something different than in the high density built environment of a city. In a city, open space means everything that isn’t covered by a building. In the case of the “Landscape Therapeutic Park” we rather have a form of landscape reaching into the city. For Brilon, landscape means the forest, the steep hills densely covered by spruce trees. For the project, the transition from the open space in the valley and the spa park with its garden-like design to the dark, shadowy forest is important. Emphasizing that contrast is central to this particular project. This matches our understanding of all our projects: to identify the parameters of each individual place that define its form and function.

What potential, what opportunity for development does the project offer?
When the project began, Brilon suffered from the impact of Cyclone Kyrill, which caused significant damages to the forests in the Sauerland region in 2007. There were numerous “memorials” consisting of felled tree trunks, upturned rootstocks and so forth, reminiscent of the cyclone’s impact. We tried to leave the destructive impact behind us and instead, revive the poetic quality of the forest. The design comprises a sensitive response to its immediate surrounding.

Which existing elements fascinated you in particular while working on this project, and how were they integrated into the design?
There was a deserted ski jump in the forest. It had already ceased operations in the 1970s. However, the forest aisle, the jump-off platform, and the referee’s building were still visible. We included the ski jump into our design in form of two separate stations within the landscape therapeutic path. At the starting position, we situated an over-sized swing that is supposed to allow visitors to experience the moment of jumping. At the jump-off area there is a small lookout platform with outward-leaning guard rails and an inscription: “fly!” In the original design, our collaboration partners B.A.S. intended to make the referee tower accessible and use it as a “library of things”. However, this beautiful idea had to be omitted from the finished project due to costs and safety concerns. 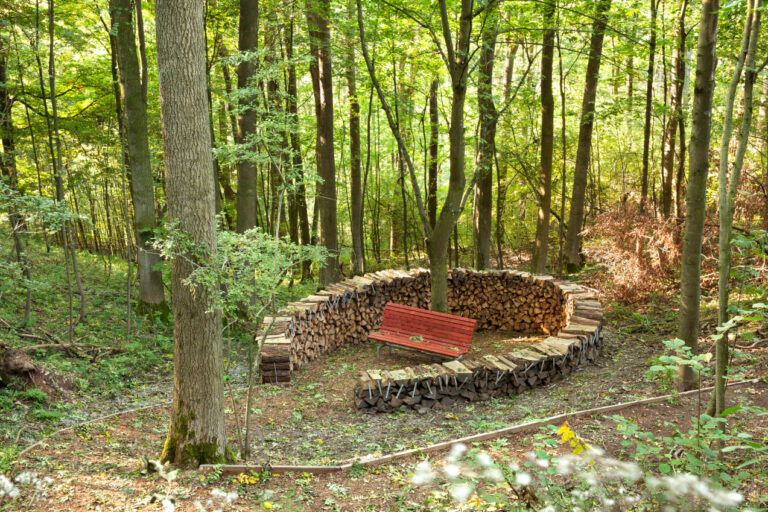 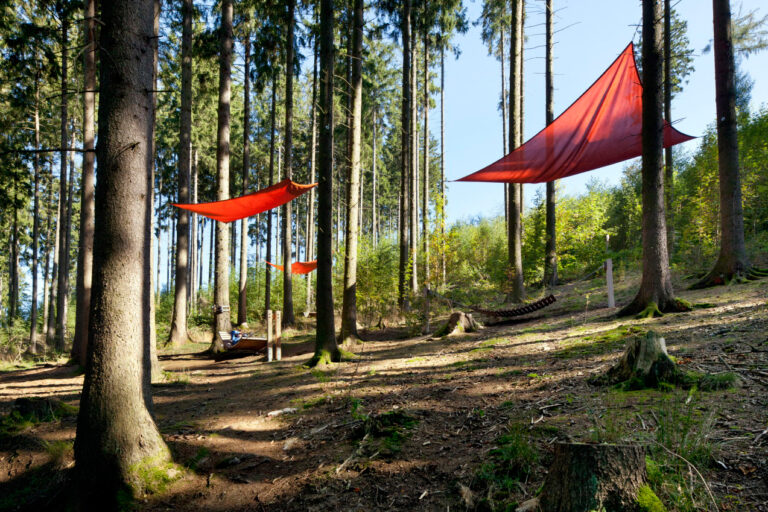 Comfortable hammocks invite to finally put up tired legs at the ending of this sensual hike. (Photo Credit: Claudia Dreysse)

The project subtitle is “Landscape Therapeutic Park”. In your view, what is the potential of landscape architecture to influence how people feel?
Perhaps less landscape architecture as such, and rather the experience of landscape. That was the lead that we followed in our design – how, where and in which instances can the view of a landscape touch us, emotionally? How can we create images that produce a certain feeling and appeal to our emotional well-being? We intended to achieve this by referring to the places that we found on-site and that already possessed a particular atmospheric quality. Through our landscape architectural interventions we intended to reinforce and dramatize them. As a result, I think that walking and hiking through the park and the forest, passing the various stations that produce feelings such as clarity, overview, openness, harmony, confusion, attentiveness, transparency and sublimity indeed have a positive effect on people’s well-being. The forest as such already has a therapeutic function, as science has recently proven.

Which were the greatest challenges you had to master for this project?
The greatest challenge in terms of planning was to formulate a unifying theme and create a connection between the individual objects that are distributed across the forest, far apart from each other. The technical challenge was that there was no standard, off-the-shelf solution for any of these objects. Instead, every solution is tailor-made, designed by us. For example, the “fairy ring” consists of fluorescent acrylic glass with a diameter of 5 meters that floats four meters above the hiking trail – suspended by the surrounding trees. Supervising the construction process wasn’t easy, because the stations were distributed far apart from each other in terrain that was often difficult to navigate. Each one of the thirteen stations of the “therapeutic pathway” have an individual character and are site-specific. An audible experience is provided by the “fairy sounds” installation.

What is the story behind the “forest fairy of Brilon”?
No other city in Germany is surrounded by more forest than Brilon. Since 2004 and as a tourist attraction, Brilon biannually nominates a young woman who lives in the city as “forest fairy” – similar to the wine queens typical for German wine producing towns. We think that the forest fairy is a very poetic idea and wanted her to appear at one of our stations. For this purpose, we proposed an audio installation that is supposed to symbolize the fly-by of the fairy as a mythical forest dweller. Beyond the sound of the wind rustling through the leaves of trees, visitors can hear her delicate fairy sounds. 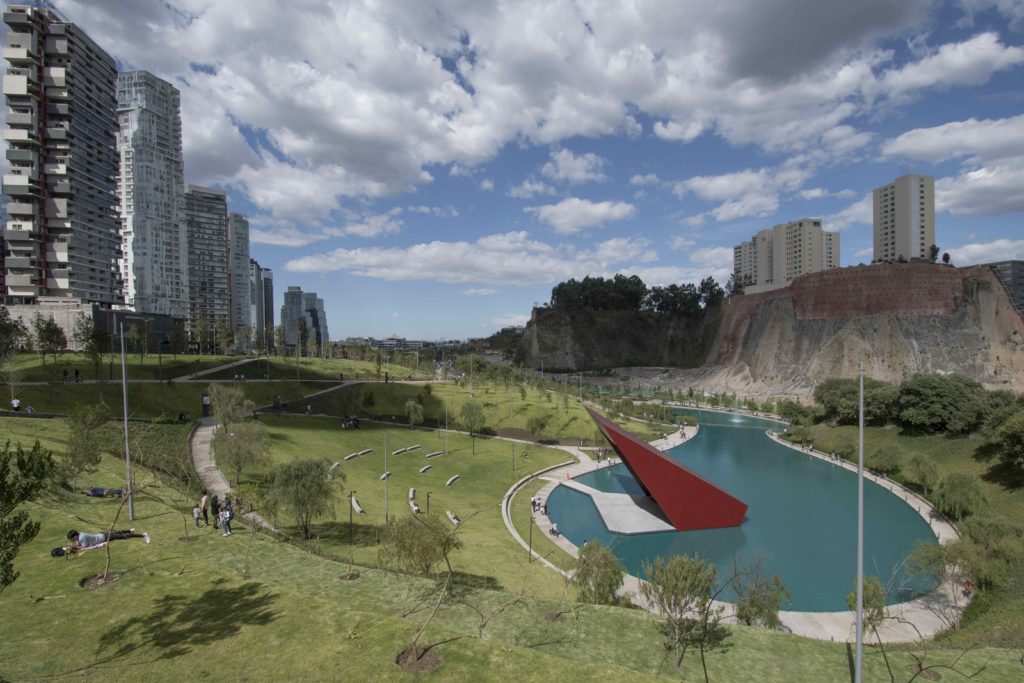 Landscapes to the Max 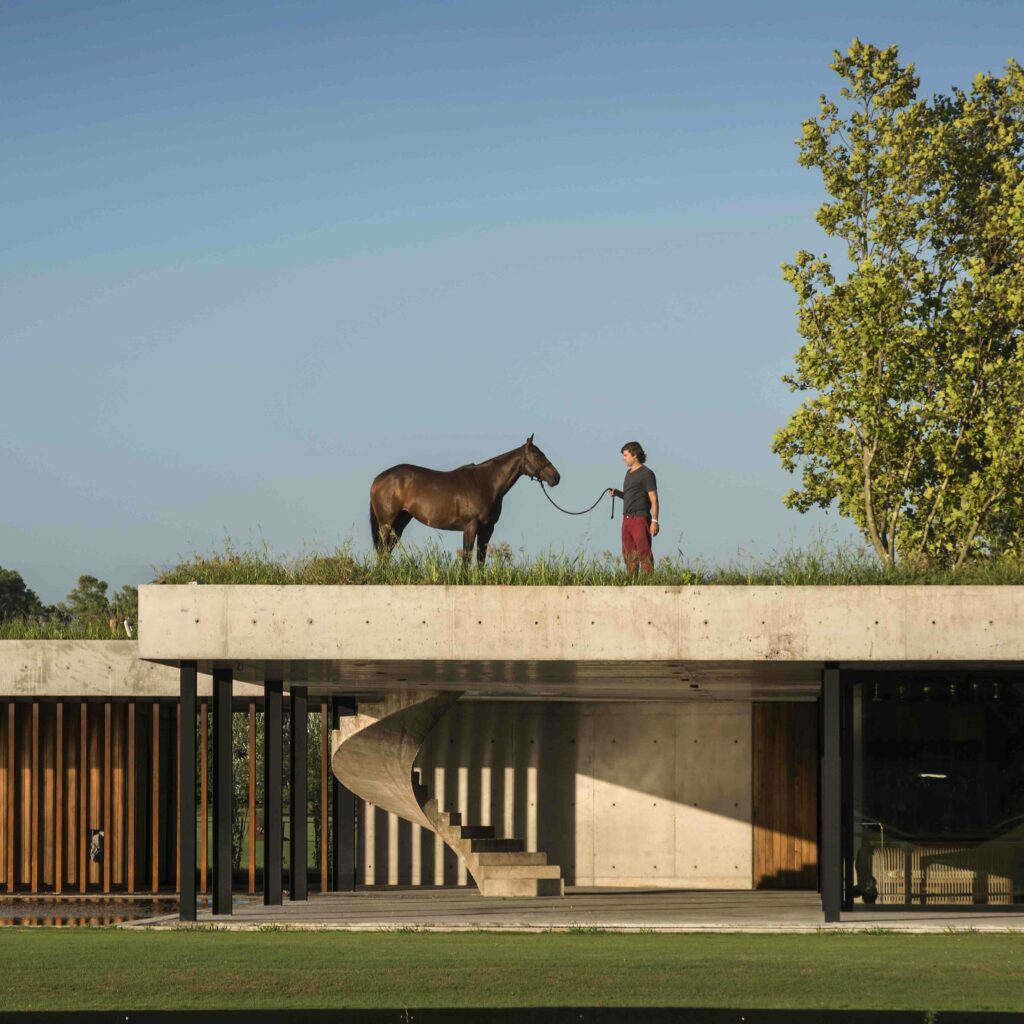 Only the Best for Horse and Rider 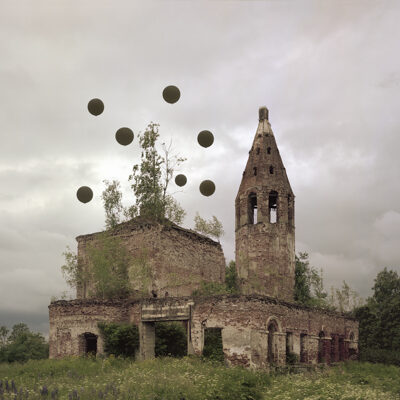