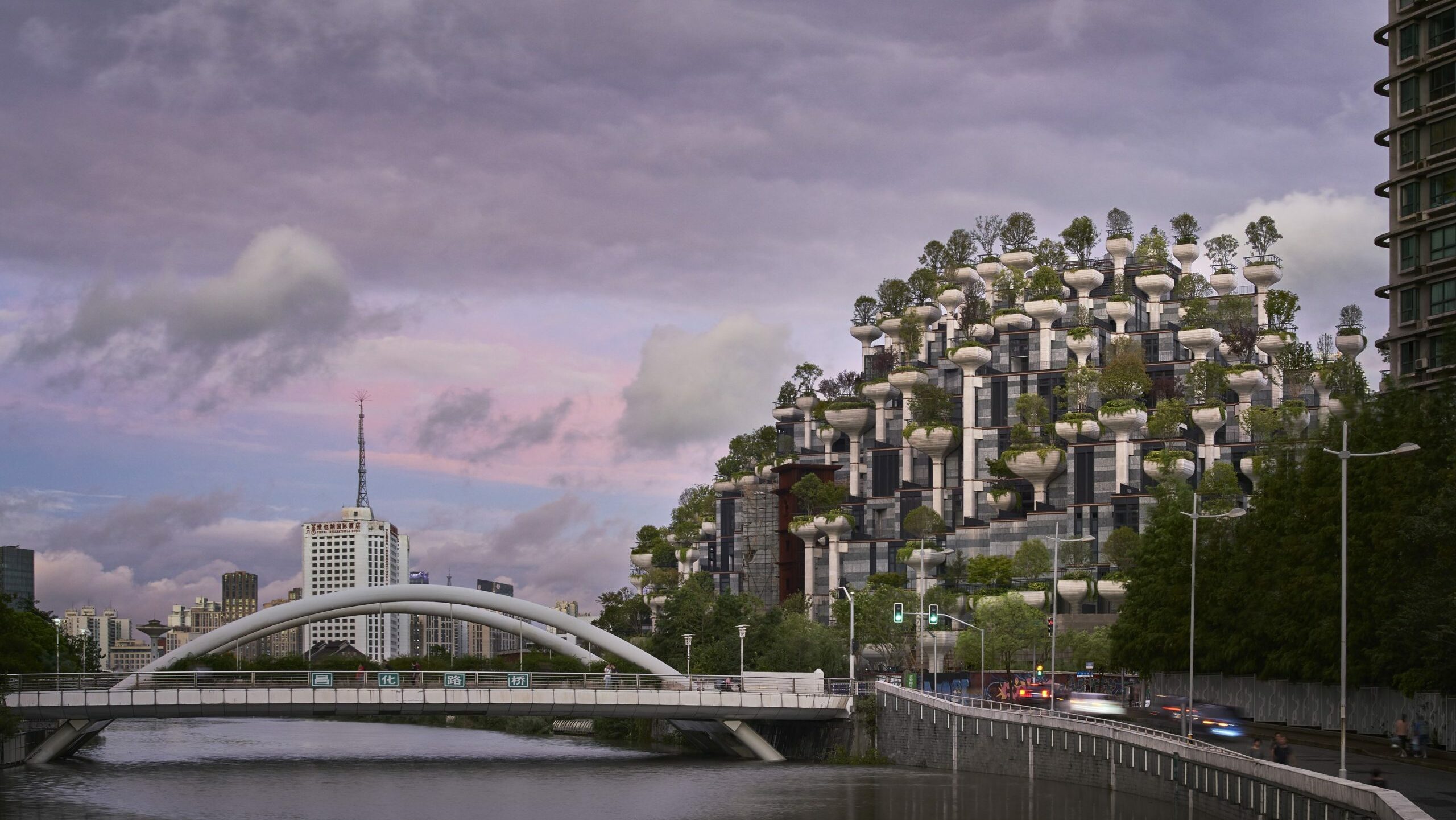 Can GREEN in architecture improve the climate in cities, reduce heat build-up, reduce fine dust formation and increase people’s well-being? The exhibition “Greening the City” of the German Architecture Museum in Frankfurt (DAM) is dedicated to the advantages and challenges of urban greenery – especially greening houses and roofs in existing and new buildings. In addition to the scientific perspective, the exhibition also takes a look at the technical possibilities and practical issues.

Things can’t get any greener. Or can they? The topic of Building Greening as a response to climate change (felt especially in cities) is more current than ever and has not become any less important during this pandemic – on the contrary. And yet, actually realized cases of green roofs or walls are slow to spring up, at least in this country. Or is there simply a lack of oversight? The DAM in Frankfurt has now made a virtue of necessity and has, in the run-up to its current exhibition “Simply Green – Greening the City”, invited Best Practice examples from near and far; a photograph and short explanation sufficed. The response of 120 entries before the opening of the exhibition was pleasing, so they say. Entries ranged from more traditional house walls with ivy and vines, to new urban farming examples with raised beds on the rooftop. There were submissions from both larger firms (Schneider-Schumacher, Sauerbruch-Hutton) and from tenant communities, who seem to be particularly active in this field.

The exhibition aims to encourage a fresh wave of green innovation, an ambition currently realized more by its handbook since the building’s closure due to Covid-19. The handbook appears to be practical, informative and argumentative. It approaches the topic with questions that are often posed by interested parties as well as readily by greening-sceptics: How beneficial to the environment is the greening of an individual building? What techniques of wall-based greening exist? Which plants are suitable? How does irrigation work in winter? What effect do green roofs have on the reduction of precipitation and noise levels? How can you calculate costs? Which permissions are needed?

In light of the positive conclusions about the values of building greening that one can come to after reading this handbook, the question remains: Why has so little of it been implemented in this country? A glance at the section of the handbook with real-life examples reveals how the majority really are located abroad: Singapore, the worldwide center for green buildings, is of course mentioned, as are Chinese metropolises as well as the almost historic prototypes by Stefano Boeri in Milan (Bosco verticale) and Edouard Francais in Paris (Flower Tower).

Further research unveiling examples from Australia, Canada, Japan, the Netherlands and the US only proves this point. The fact that development is mostly focused on large cities is no surprise, given the climatic effects within densely built-up areas. A hesitant yet apparent trend seems to be the combining of green buildings with new parks in their vicinity. This would presumably be desirable both climatically and socially.

It also becomes apparent how a small number of individual players, operating worldwide and making this topic their core brand, now set the tone: WOHA in Singapore, MVRDV from Rotterdam, Stefano Boeri in Milan, as well as Parisian firms Jean Novel, Vincent Callebaut and OXO Architectes. The German firm Ingenhoven Architects can also be added to this list. According to Nicole Pfoser, professor at the University of Nürtingen-Geislingen, the reasons for the comparably limited spread of this development in these parts are additional costs of producing and maintaining the greened facades, together with a lack of established inclusion in development plans. 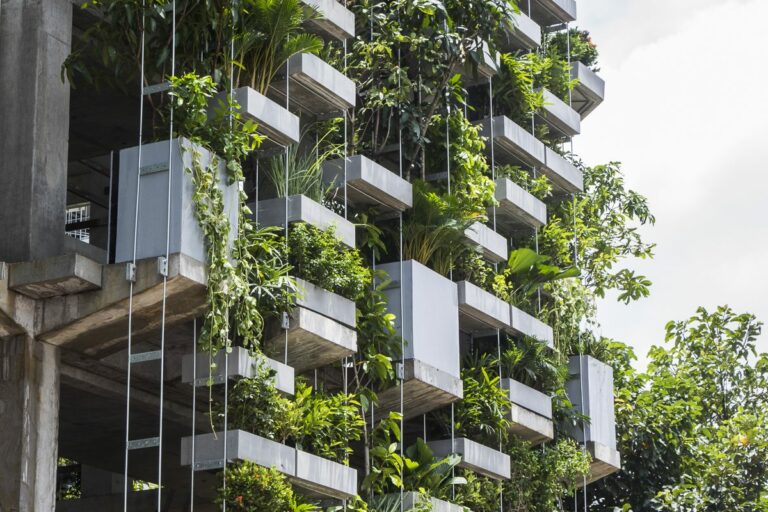 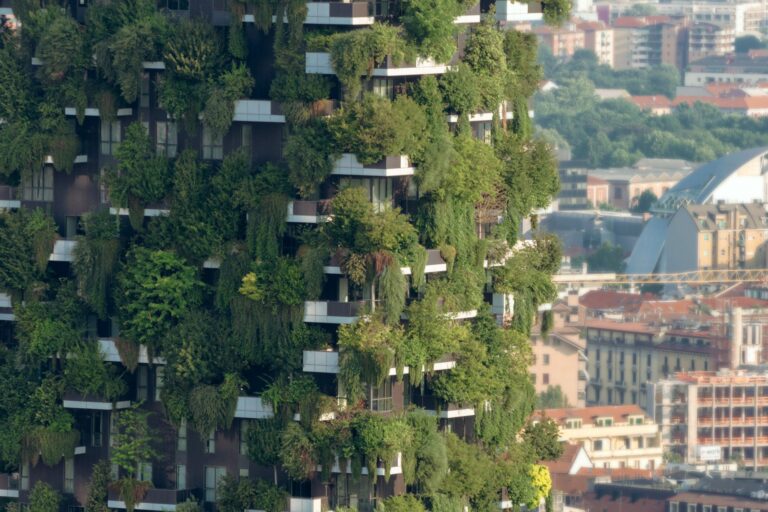 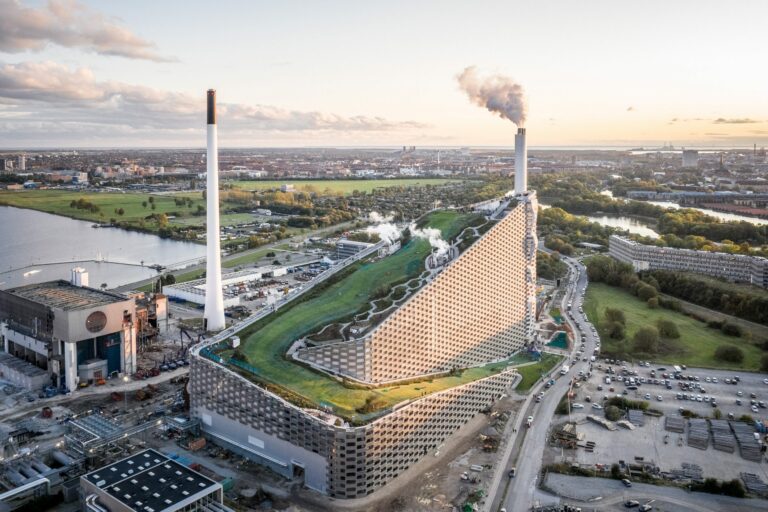 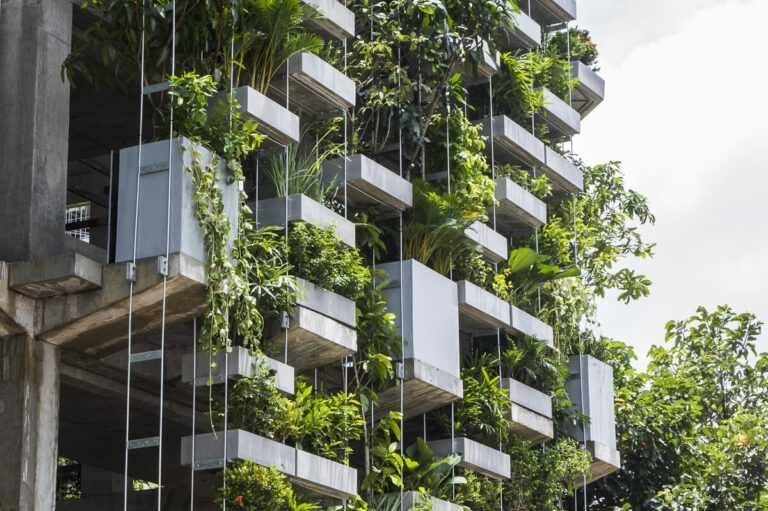 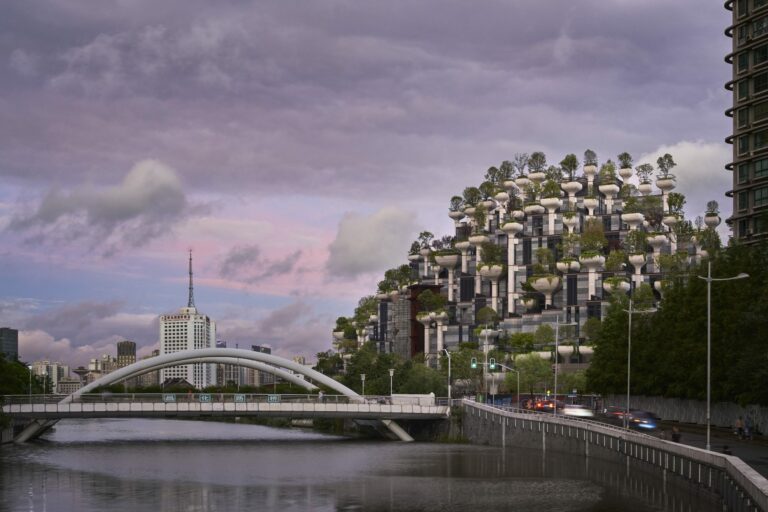 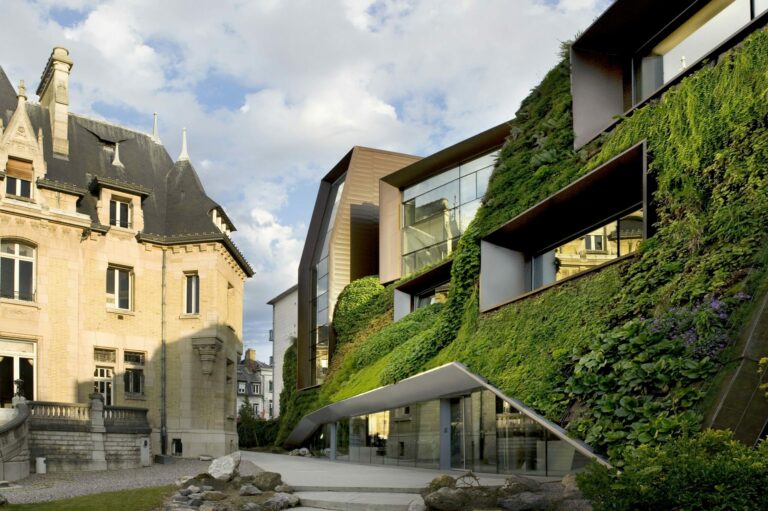 A lack of showpieces to increase public confidence

A worldwide leader in this field, Singapore accelerates this development through a regulated Green Plot Ratio, a site coverage index for green spaces, which is specified in the development plans of the city state. Finally, Pfoser argues that there is a lack of showpieces to increase public confidence, especially with regard to public administrative buildings. In this regard too, it seems Germany is less cosmopolitan and innovative than it likes to think of itself as being.

Talk in context of the exhibition „Simply Green – Greening the City“ with Richard Hassell and Wong Mun Summ (WOHA, Singapore)

In any case, readers viewing the exhibition – or rather the handbook – will in future be able to better confront developers. And maybe architects will gain inspiration from those pages on which are shown the creative possibilities that building greening offers for the design of facades, as well as their immediate and wider surroundings.

The exhibition is still closed because of the current hygiene measures due to the Corona pandemic, nevertheless it is possible to get the handbook or to use the digital offers.