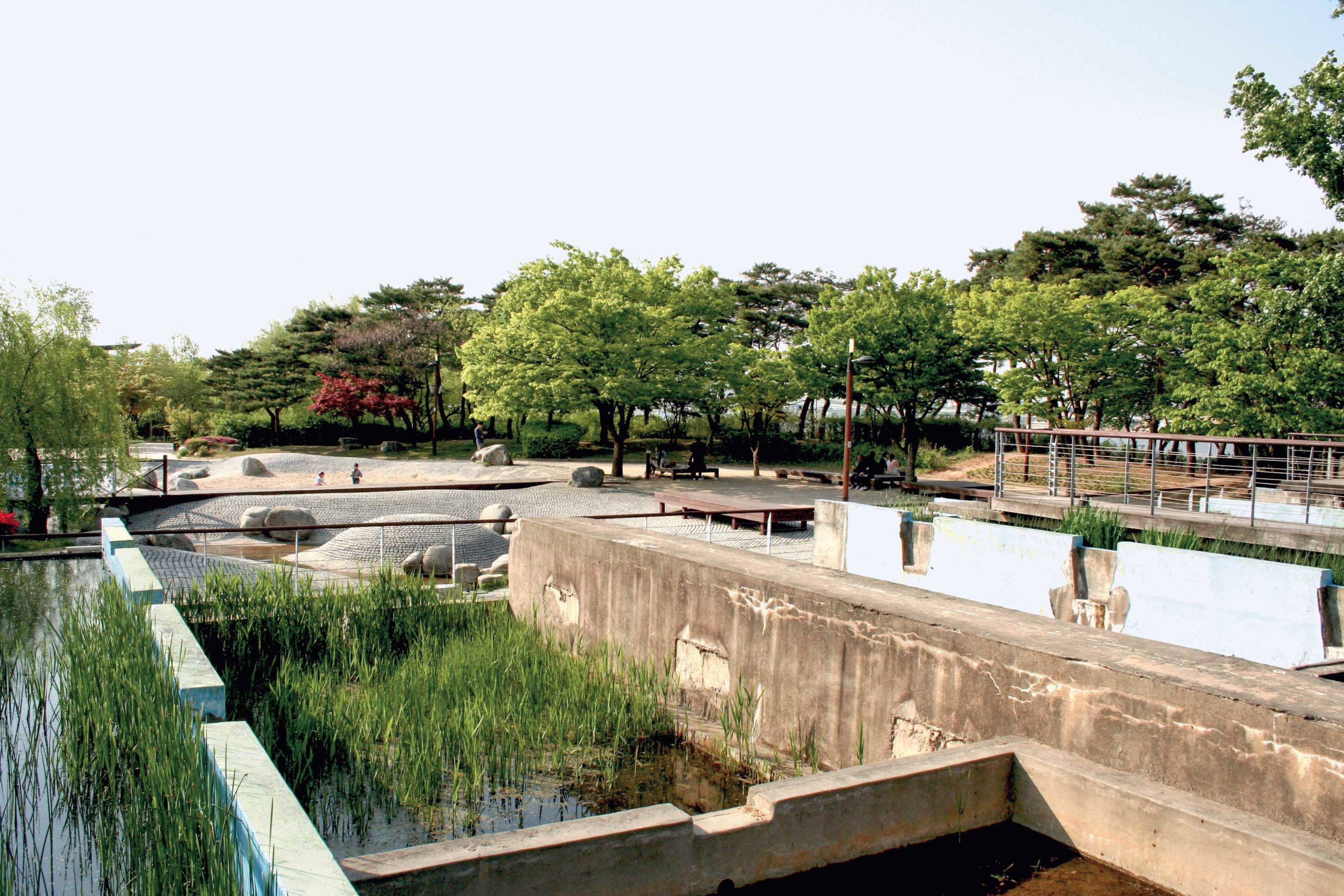 Seonyudo Park is considered a pioneering post-industrial project in South Korea. Based on the multifaceted history of the Han Island, which located in the middle of the South Korean capital Seoul, planners developed a concept that incorporates and explains the complex industrial past. The park has been a success, albeit not entirely in the spirit of its inventors.

Seonyudo Park is located on a small, oval-shaped island in the middle of the mighty Han River, which flows through the South Korean capital Seoul. The island has a long history of transformation and reinterpretation.

At the time of the Joseon dynasty (1392-1910), a remarkable hill was located on Seonyudo. This impressive morphology, as well as the expansive view of the city from the hilltop, inspired Korean musicians, painters and writers. Appreciation for the landscape, however, changed at the turn of the 20th century: During the Japanese colonial period (1910-1945), large parts of the hill were excavated for the construction of infrastructure projects. The island, once a place of contemplation and an appreciation of the landscape, became a mining area for building materials.

In 1978, the island’s character changed once again. A wastewater treatment plant was built to ensure the supply of water to the south-western areas of Seoul. The facility took up the entire island and rendered it inaccessible to visitors. It was not until the wastewater treatment plant was shut down in 2000 that it was once again possible to make the island accessible to the general population and to reclaim Seonyudo as a recreational and green space.

Seo-Ahn Total Landscape and Joh Sung-yong Urban Architecture used the island’s multifaceted history to create an unconventional park on Seonyudo. Instead of strict conservation or a radical tabula rasa approach, the concept aimed to include and reinterpret the industrial vibe. The planners won several awards for their careful treatment of industrial relics, including the “Design Award of Merit 2004” from the American Society of Landscape Architects (ASLA). The 11.4 hectare park, which opened in 2002, strives to create a complex confrontation with the industrial past.

Although nature created a global success story since the Emscher Park International Building Exhibition, in South Korea however, this approach to design was hardly represented at all at the beginning of the twentieth century. On the contrary, several Korean landscape architecture projects pursued the approach of restoring lost landscape values and locations from the Joseon Dynasty. Structural relics of the rapid industrialisation and urbanisation of the 1960s to 1980s seemed to be of little interest at the time and were therefore torn down or replaced by historical reconstructions.
When designing Seonyudo Park, the planners took the completely opposite approach. They saw the place as a landscape palimpsest, which can only be understood and enhanced by overlaying a variety of layers. 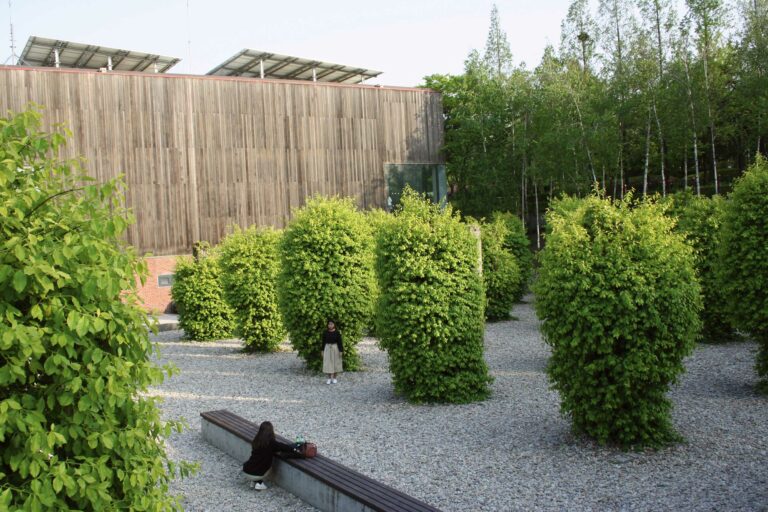 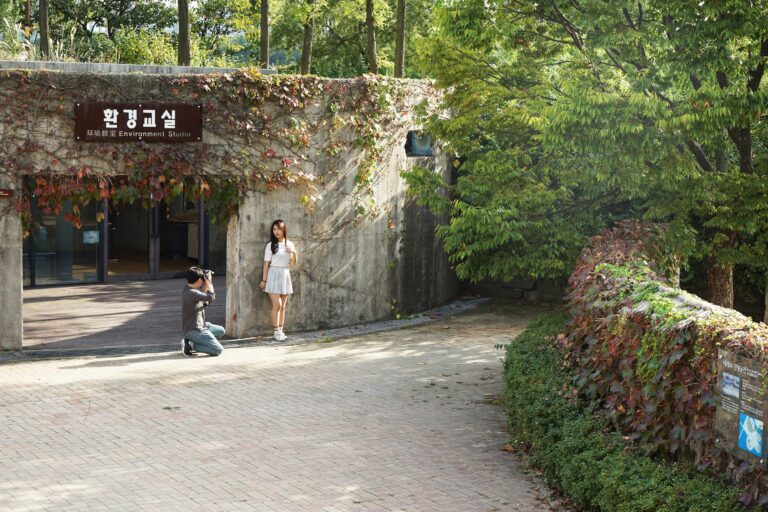 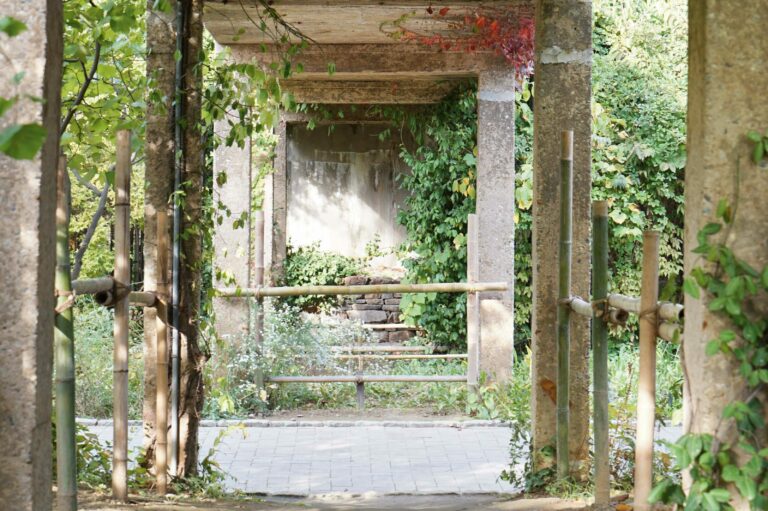 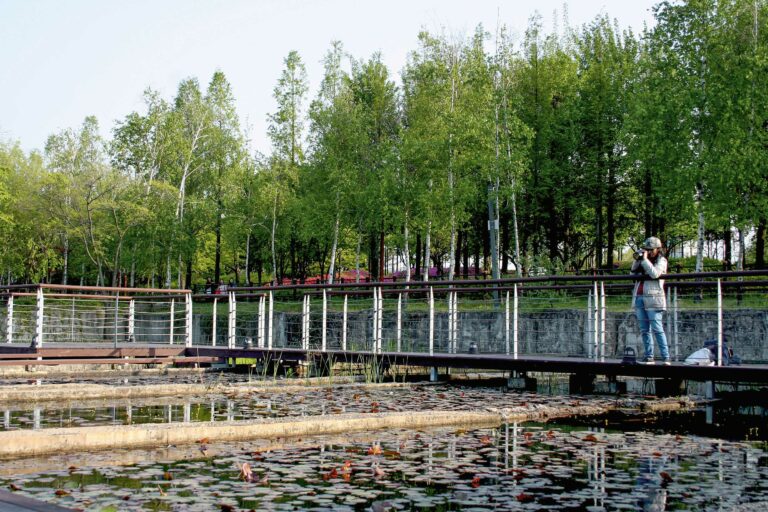 The wastewater treatment plant was dismantled with anatomical precision in order to gain insights into its interior and to transform based on an ecological ethos. Building roofs and false ceilings were removed. Former interior spaces became exterior space. Columns remained free-standing in the room like skeletal sculptures. Five park areas were created as part of this process: the Water Purification Garden, the Aquatic Botanical Garden, the Garden of Transition, the Four Circular Spaces and the Garden of Green Columns. An exhibition room, a café, a playground, a viewing pavilion and a greenhouse complete these central areas. Connection to the mainland will be provided via two bridges at the southern and northern ends of the island. For the Water Purification Garden and Aquatic Botanical Garden, the planners planted old sedimentation and filter basins from the treatment plant with bulrushes. Their aim was to bring the visitors closer to the water purification process by means of phytoremediation instead of the chemical processes that were used in the past.

The Garden of Transition was also created in the location of the former sedimentation basins. In the lowered, semi-open compartments, in which the old basic structure of the basins can still be seen, there is an aroma garden, a vineyard and a fern garden. The vegetation there is purely decorative. Although there are varied visual axes and spatial situations, this area lacks a recognizable reference to the location. Visitors can reach the four large buffer tanks via a raised bridge structure with platforms. Today, the huge cylindrical tanks house a playground, an education room, sanitary facilities and a concert stage. To the east of the tanks, almost in the centre of the park, is the Garden of Green Columns. The factory building was once located there and now only the remaining columns bear witness. Deprived of their supporting function, they merely provide support for plants and are increasingly disappearing under the abundance of growth.

Filtered through the lens of the camera – Seonyudo Park

Since the opening of the park sixteen years ago, nature has symbolically reconquered the sewage plant. The trees and shrubs at the edges of the island are so tall that they form a dense green wall. Original qualities of the island – the connection to the water, the wide view into the distance over the mighty floods of the Han River – have been lost. Trees, shrubs and perennials were planted very densely in order to quickly create an aesthetically pleasing impression. In an ironic twist, they now need to be removed for aesthetic reasons, reports the park manager.

As it has turned out over the years, appearance is of central importance. Numerous visitors come to the park because they are fascinated by industrial aesthetics, not because they want to confront its historical past. Industrial relics are known to have a high appeal, but in Seonyudo this aspect seems to be particularly pronounced. A study by Professors Shin Ha Joo and Young Hee Kim of Seoul Women University shows that most of the park is not visited by local residents. Instead, most of the visitors are young people who use the scenery for photo shoots, film shoots and selfies.
As a result, the gaze of many park visitors no longer seems to be directed at the landscape, but – filtered through the lens of the camera – at themselves. The reduction of the park to an aesthetic background may at first seem disillusioning to some planners. At second glance, however, Seonyudo’s media attention creates something essential: The concept of industrial nature is spreading and multiplying in South Korea on a large scale and at high speed through the numerous photos and film shoots.

Read the opinion piece on Seonyudo Park and how photographic consumption influences the spatial understanding of parks in topos 107. 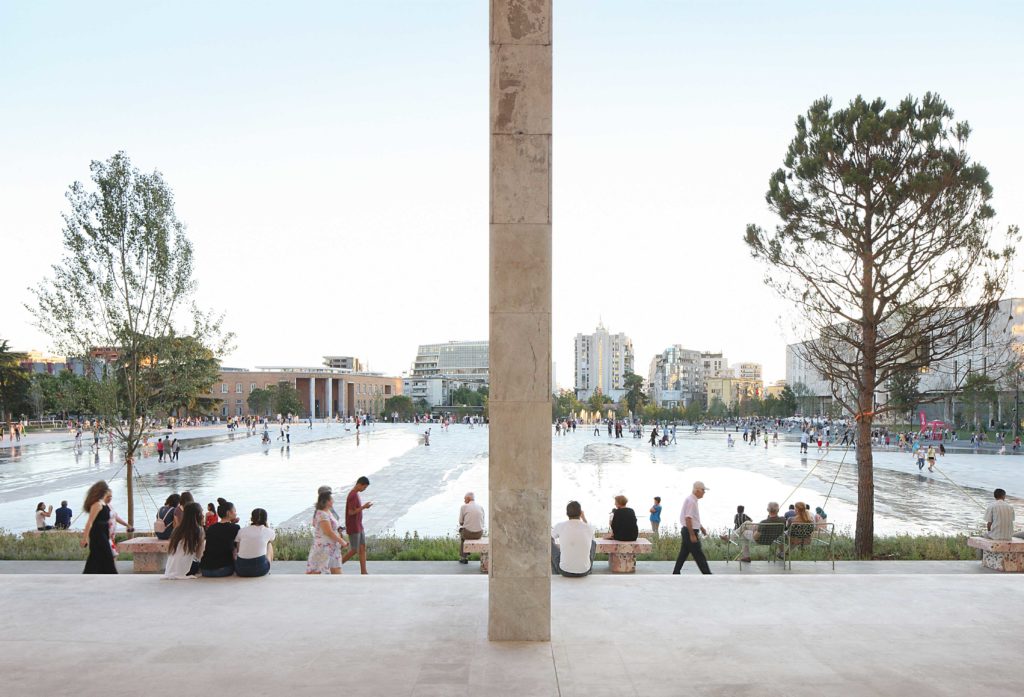 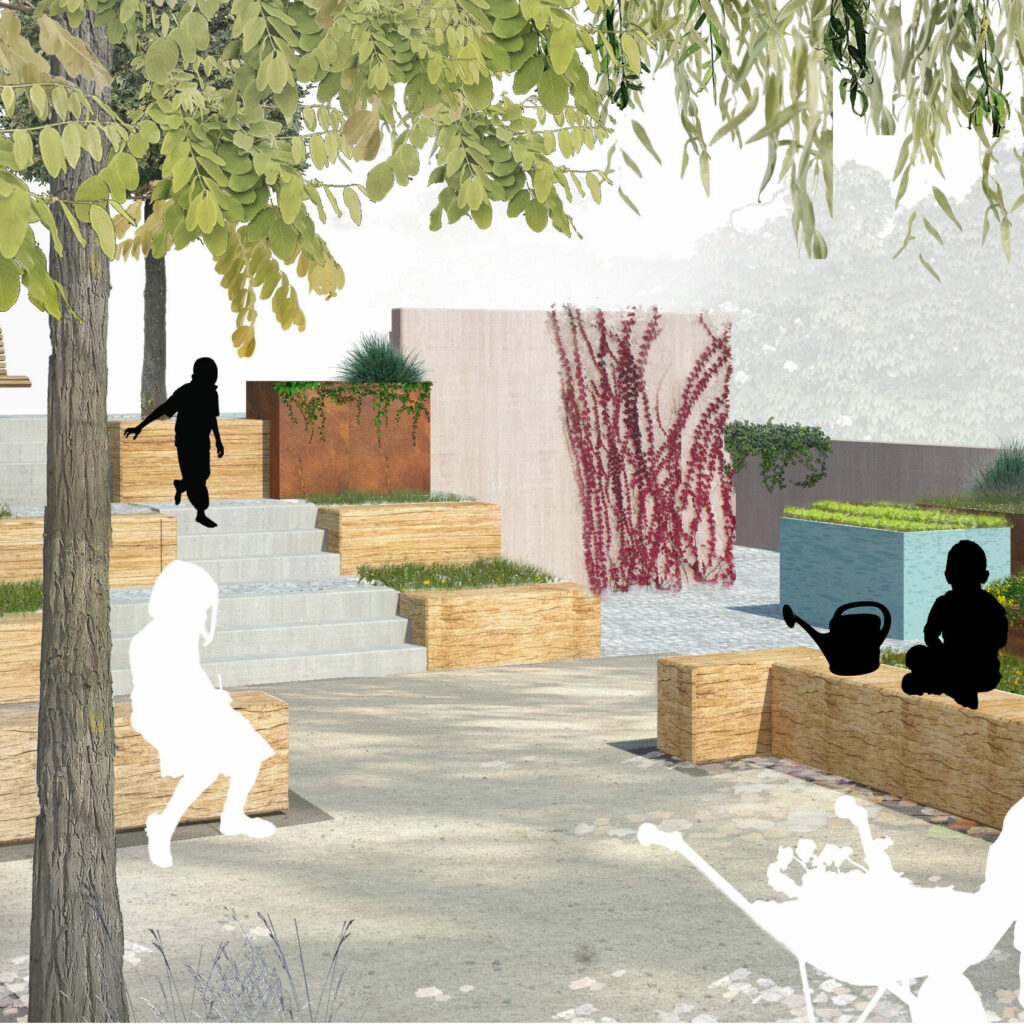 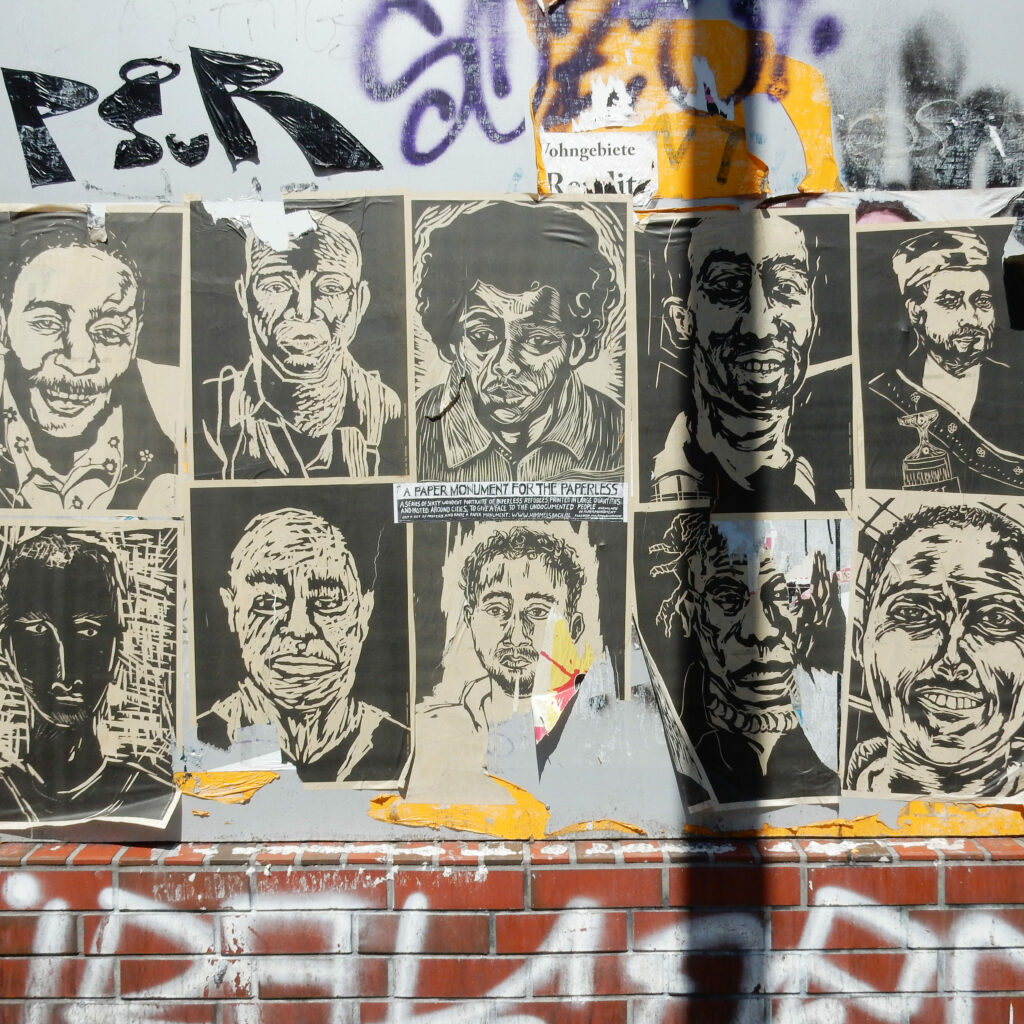