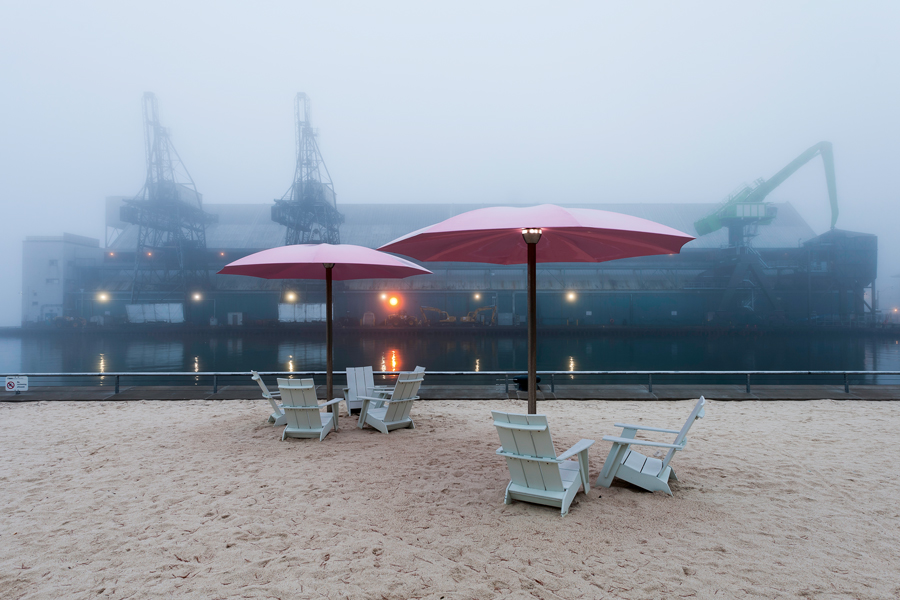 Sugar Beach, set against the silhouette of enormous sugar boats and adjacent to a sugar refinery, is a link between the water and the former industrial sites of Toronto’s waterfront.

Sugar Beach, set against the silhouette of enormous sugar boats and adjacent to a sugar refinery, is a link between the water and the former industrial sites of Toronto’s waterfront.

Overcoming the challenges of a large-scale, post-industrial site, Canada’s Sugar Beach has achieved a place on the world stage. Its international recognition is based on the park’s ability to defy its diminutive scale and create a larger-than-life spectacle along Toronto’s new waterfront. Inspired by the painting Bathing at Asnières by Georges Seurat, the design has redefined the public’s relationship to the water’s edge by opening views and vistas to the water and horizon beyond, creating a destination that allows reprieve from the stresses of urban life.

In 2007, Claude Cormier + Associés, together with The Planning Partnership, won an invited international design competition led by Waterfront Toronto. A signature urban public space was to be developed on just under two acres and would serve as a gateway to a new, rapidly growing precinct, provide an anchor for the emerging community, and also create a flexible,  dynamic gathering area for all Torontonians. The new space was envisioned as an intensely used urban site that could accommodate large-scale gatherings and performances without compromising anticipated day-to-day informal usage. Building on the success of HTO Park, opened in 2007 and designed by Claude Cormier + Associés with Janet Rosenberg Associates, the winning design for Sugar Beach proposed the site as the next moment within a hierarchal system of urban beaches along Toronto’s shoreline.

The history of Toronto’s waterfront, like many other North American cities, involved extensive landfilling to accommodate rapid growth of industry and commercial activity. The subsequent decline in shipping and decreased reliance on railways rendered the once-bustling area less useful for industrial purposes. Sugar Beach is adjacent to an active sugar refinery, one of the few remaining industrial uses on the waterfront. The industrial heritage of the site resonates throughout its entire design, from the selection of materials to the name of the park. The design team embraced the competition’s mandate by celebrating this industrial use through material selection and designed elements, as well as by accommodating the sugar refinery’s ongoing uses, in particular the theatricality of sugar-boat moorings across the slip.

The overall park design consists of three main areas: an urban beach, defining the west and south edge of the site; a tree-lined promenade that runs diagonally north/south through the site, forming the eastern edge of the beach; and an event space with both earthen and granite landforms providing seating, adjacent to a media/entertainment complex on the east edge of the site. The design palette is simple and robust, with special care and consideration given to the overall detailing and grading of the site.

The layout and positioning of the urban beach maximizes the frontage to the dramatic operations of large-scale sugar boats. It is carefully sited to expand the amount of space available for viewing the unloading of raw sugar. Dozens of white beach chairs are sprinkled throughout the “white sugar” sand, situated in intimate pairings and larger groupings to create viewpoint clusters. The element that defines the urban beach is the pink shade structure designed to look like an umbrella. Conceived by industrial designer Andrew Jones, the 36 permanent shade structures were designed and constructed for all-season waterfront exposure, withstanding high winds and intense UV rays. The pink color of the umbrellas uniquely contrasts with the surrounding context of the sugar boats, the refinery structure, the sand, water, and the ever-changing sky, creating a bold presence that resonates at all times of the day, through all kinds of weather, and in all seasons. 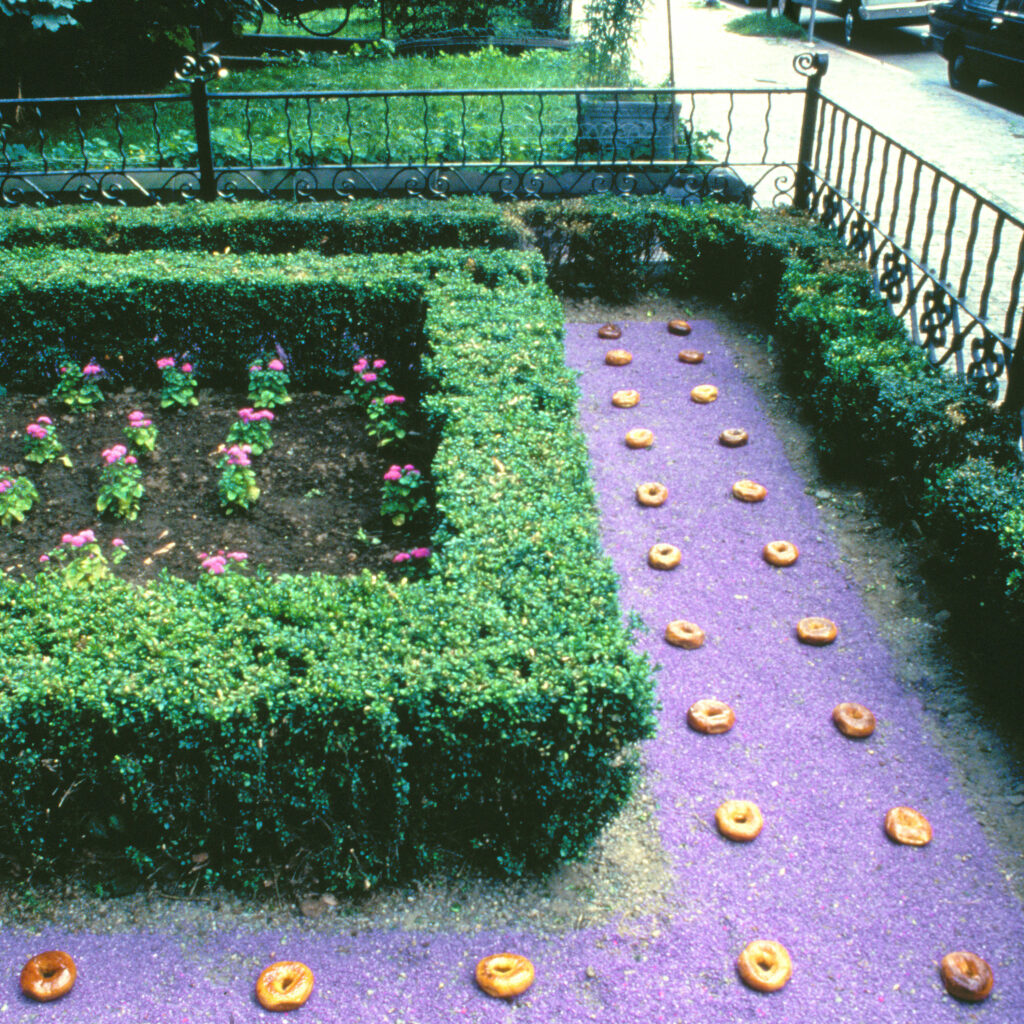 A Bagel from Martha’s shop 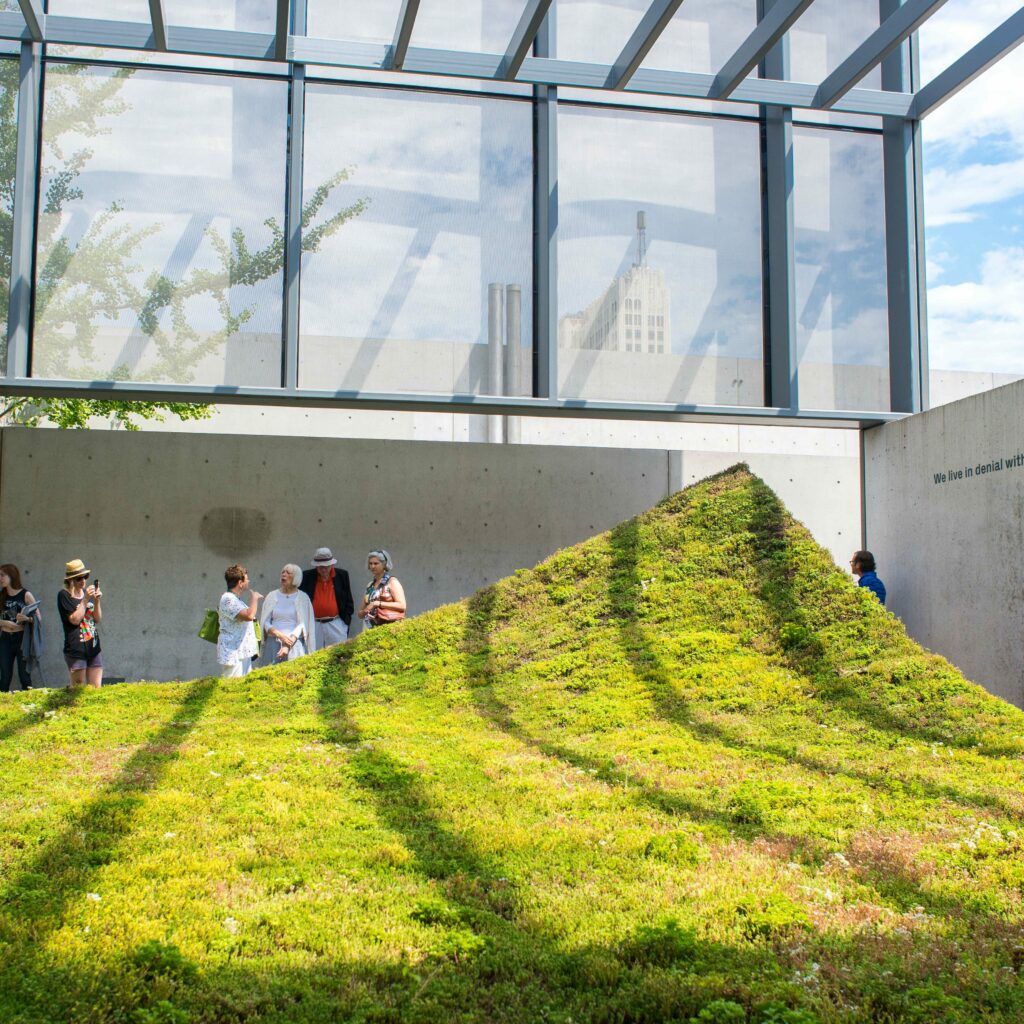