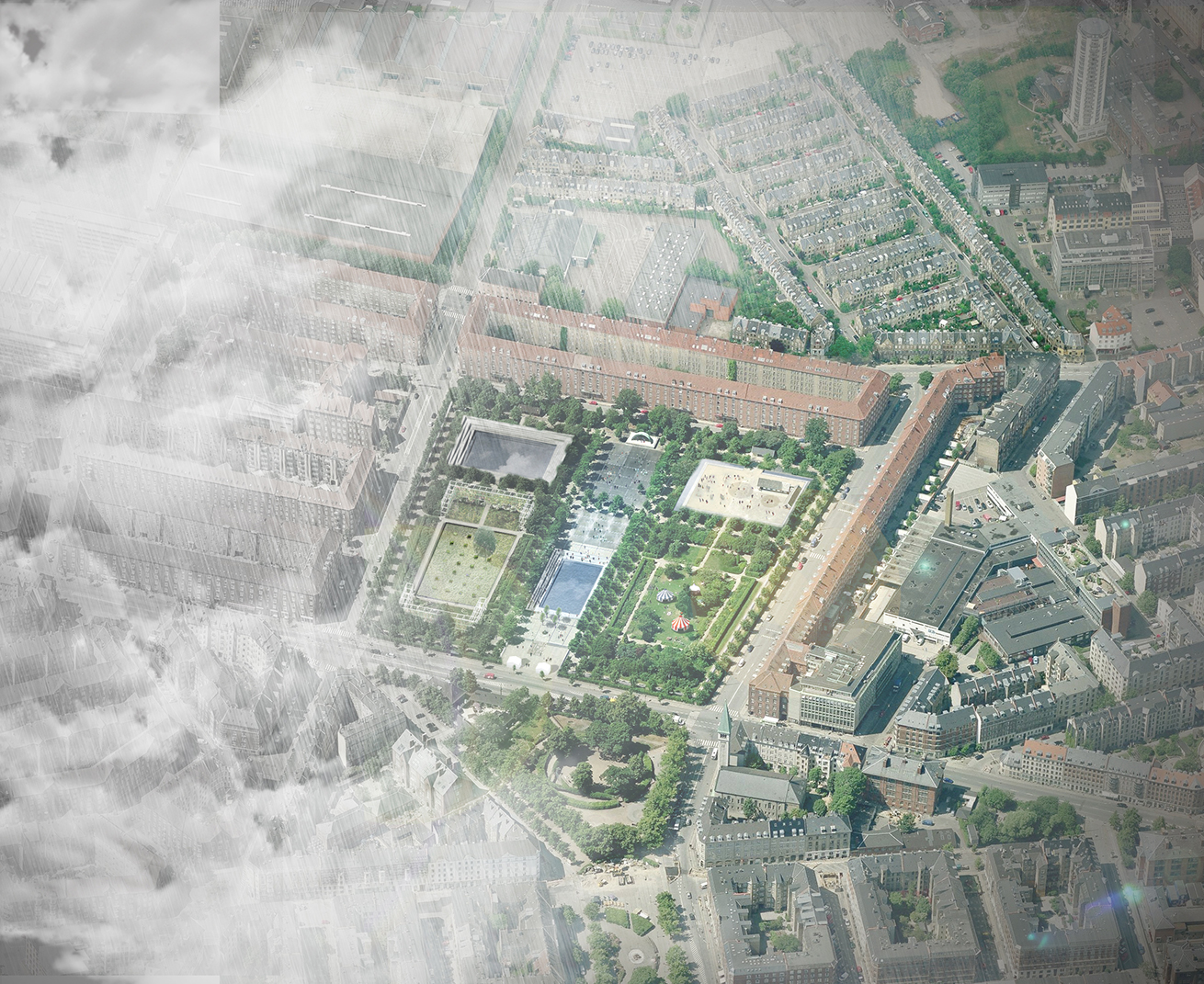 The aerial view shows how the neoclassical structure divides the park into six different spaces - all which have varied functions.

Climate changes will inevitably transform the urban landscape. Acting with visionary foresight, the municipality of Copenhagen has decided upon a comprehensive Cloudburst Management Plan for the entire city, including 300 cloudburst adaptation projects in the next 10 to 20 years. Enghaveparken is among the first of these. With so many projects planned within a short time span, how do we avoid the risk of ending up with relatively generic projects, possibly characterised by a strong focus on the new technical solutions? Enghaveparken might provide an answer.

Enghaveparken is a well-preserved neoclassical park in Copenhagen that the design team has to adapt to climate change while preserving the cultural value of the park’s neoclassical structure. In the contemporary ‘Anthropocene age’ the human impact on the world is so severe that there is no place not influenced by human activities. This emphasises the long-known mantra we landscape architects live by, i.e. that no work is done on a tabula rasa.

Everything we do must relate to the site and what was there before, and this empowers the debate about heritage. Considering heritage, and how it has shaped the proposal for Enghaveparken in Copenhagen, can be a way of strengthening cultural and aesthetic diversity in a discourse where cloudburst adaptation is at the centre of attention. If you want to understand the proposal, the devil is, as the saying goes, in the detail. We do not see large changes or a reworking of what the park is, but rather think ‘the park looks like itself’.

Throughout the proposal, two approaches to heritage are emphasised equally. First, the park’s neoclassical design from the late 1920s, with its alleys and hedges symmetrically dividing the park into six clearly defined rooms, is retained and becomes a framework for the new park. This follows what heritage scholar Graham Fairclough calls ‘Old Heritage’, which is defined as those objects or parts that need public protection on a national scale, as envisioned by experts.

However, another approach to heritage is also visible in the design: Local people have appropriated the many intimate garden rooms in this neoclassical park and introduced all kinds of social practices and events. Retaining the possibility of continuing these practices and strengthening the possibility for appropriation fits in with what Fairclough calls ‘New Heritage’. The design team seems to especially care about this ‘new’ understanding of heritage, or what historian Dolores Hayden describes as “local memories”. These activities and memories are understood and used as inspiration for the design. In this way, the two different understandings of heritage, the ‘old’ and the ‘new’, support one another.  By using both the ‘old’ and ‘new’ heritage approaches, the project is amplified.

As a result, no grand intentions are projected onto the site, but instead small innovative developments of existing structures and practices. This underlines the proposal’s commitment to preservation and the idea that a small intervention can have a great effect.

The designers seem to have gained from looking back at the different uses, seeing the different layers and understandings of heritage as a resource and framework for their creativity, which thus become a generator of the design. No two places are the same, and neither is their heritage. Thus, heritage becomes a resource and a tool in unveiling the complexity or particularity of a place, whether it is the existing spatial qualities or a certain  characteristic use of the place. Together ‘new’ and ‘old’ heritage can be a way to avoid the cloudburst transformations from looking the same.

Credits:
TredjeNatur, COWI and Platant for the Municipality of Copenhagen. Used with permission. 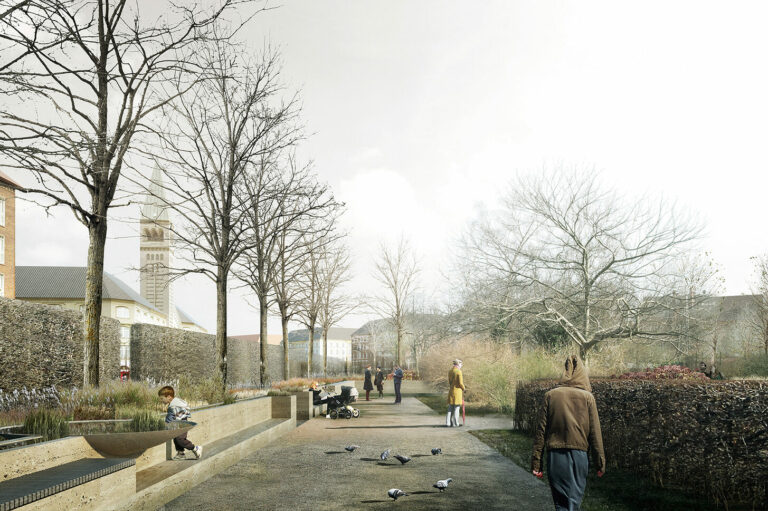 A dike frames the park and in dry weather acts in as a series of benches, with a small canal making rainwater a visible element in everyday life. 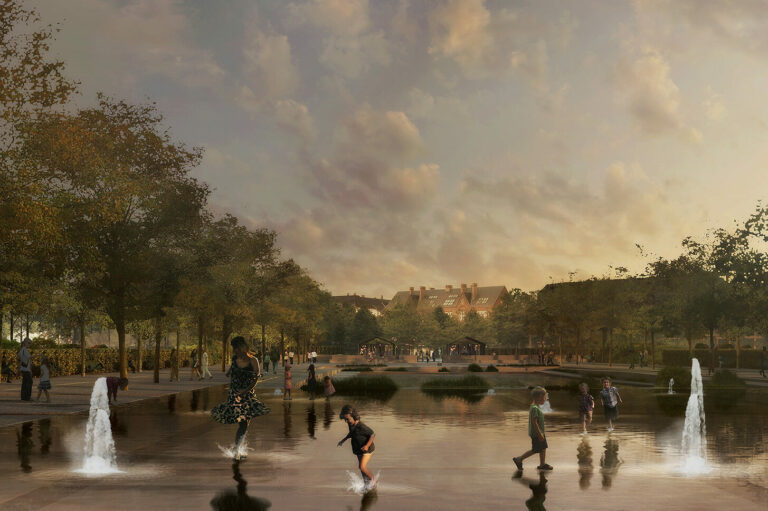 The fountain garden brings clean rainwater to the surface and allows it to become a sensorial and exploratory experience visitors can interact with. 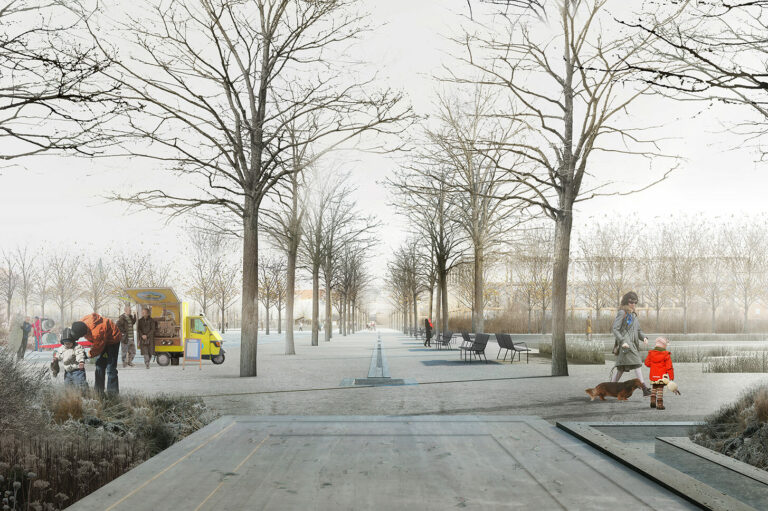 A new element, “doormats” near the entrances, are a small intervention that nonetheless make a strong statement: “Welcome to Enghaveparken, welcome home”. 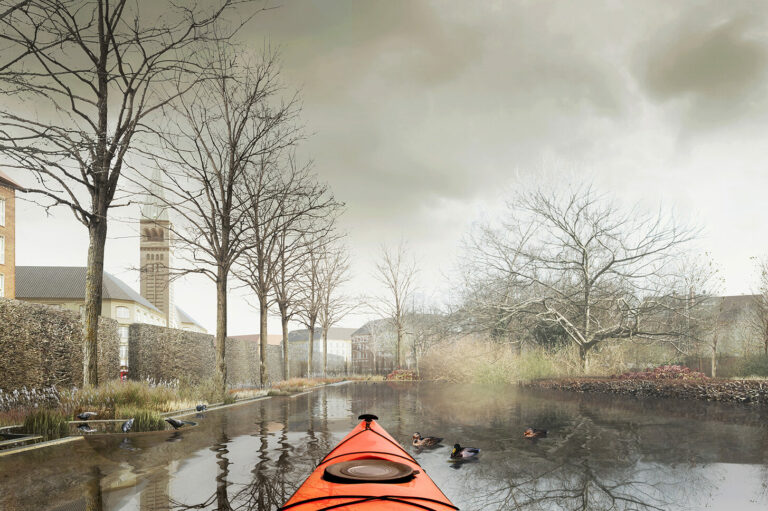 In cloudburst events the dike retains rainwater and prevents the surrounding areas from flooding. When flooded once every 100 years, the opportunity to kayak in central Copenhagen arises. 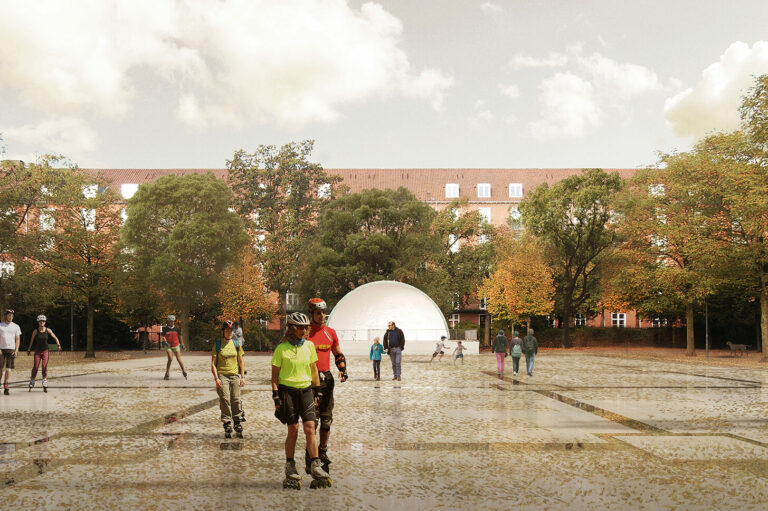 The pavement in front of the iconic stage is created with a grid-like symmetry, underlining the neoclassical heritage. At the same time it fulfils the original purpose of being a dance floor. 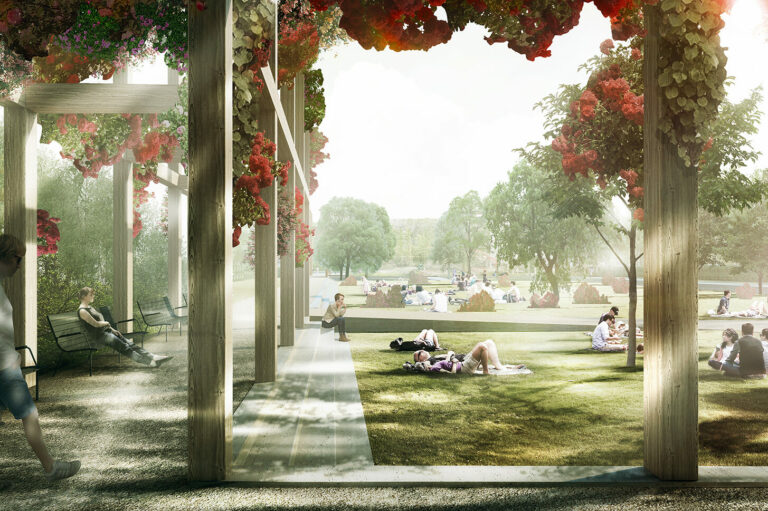 The espaliers in the park are a great example of how the designers take an existing feature and optimise it. The new espaliers will be nine metres tall and become an eye-catching landmark. 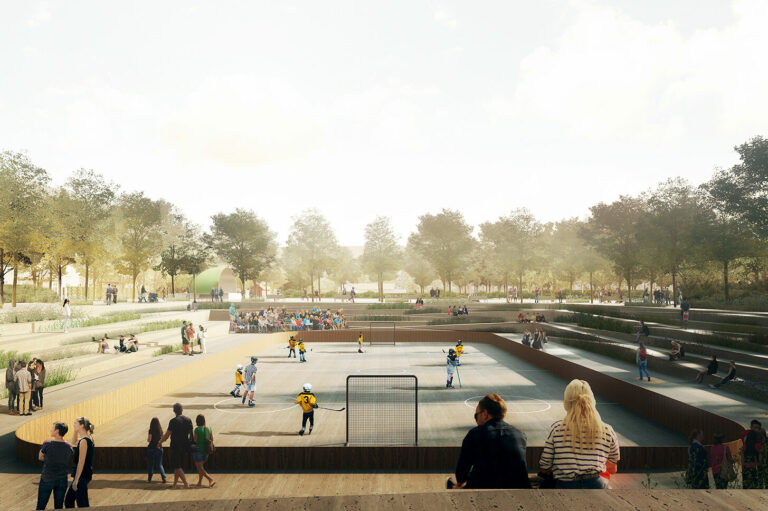 The existing sports area will be pushed down below ground level, creating an arena. This is done to retain rainwater in case of cloudbursts. This is an example of how the use of the park has influenced the design of the cloudburst solution. 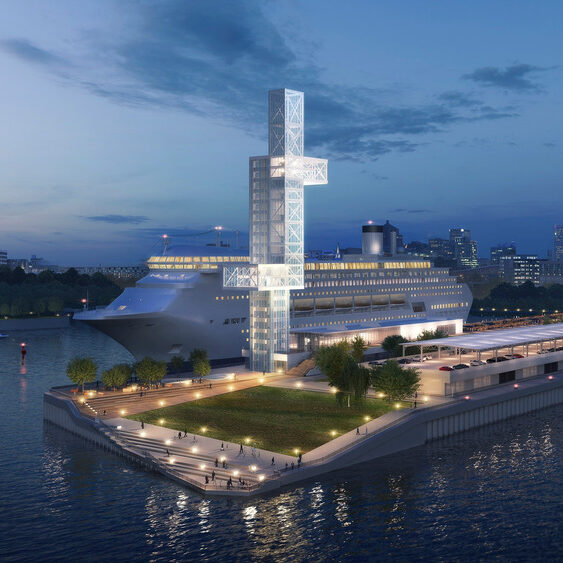 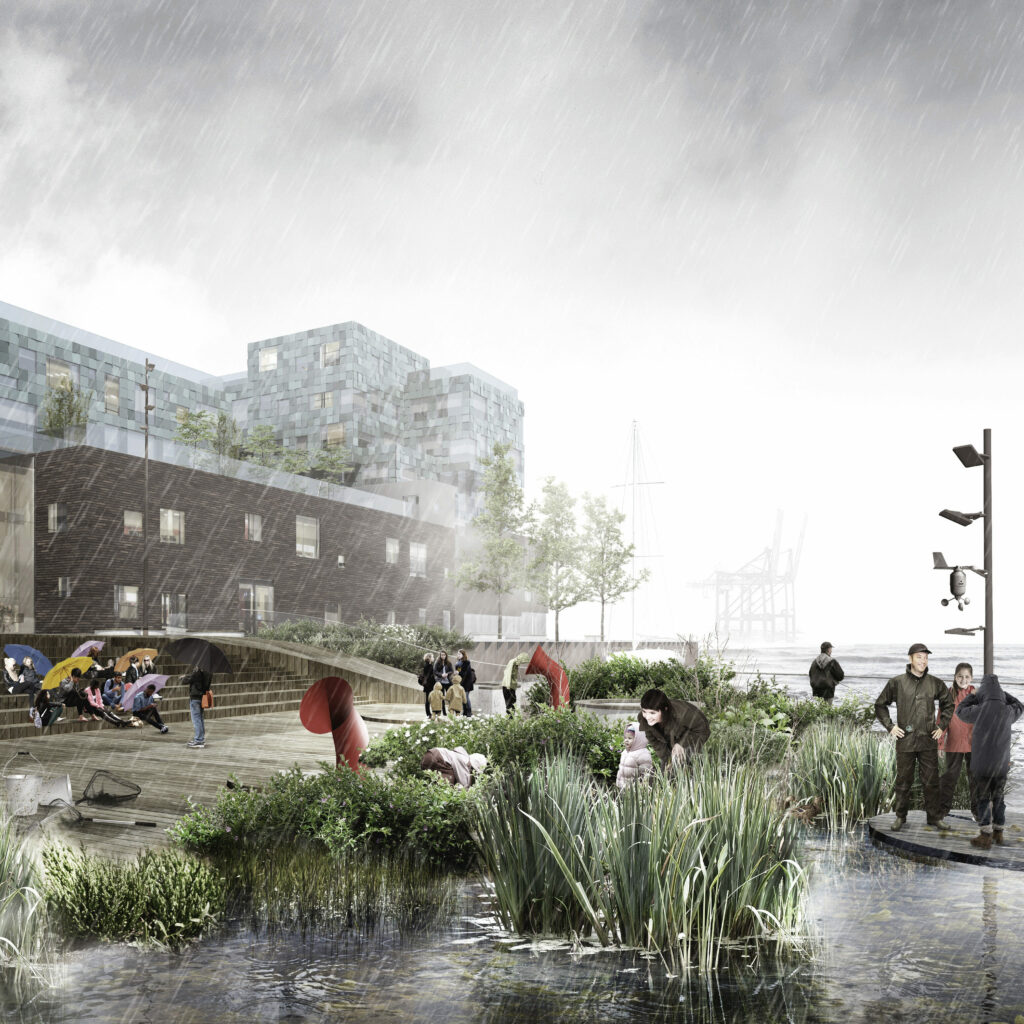 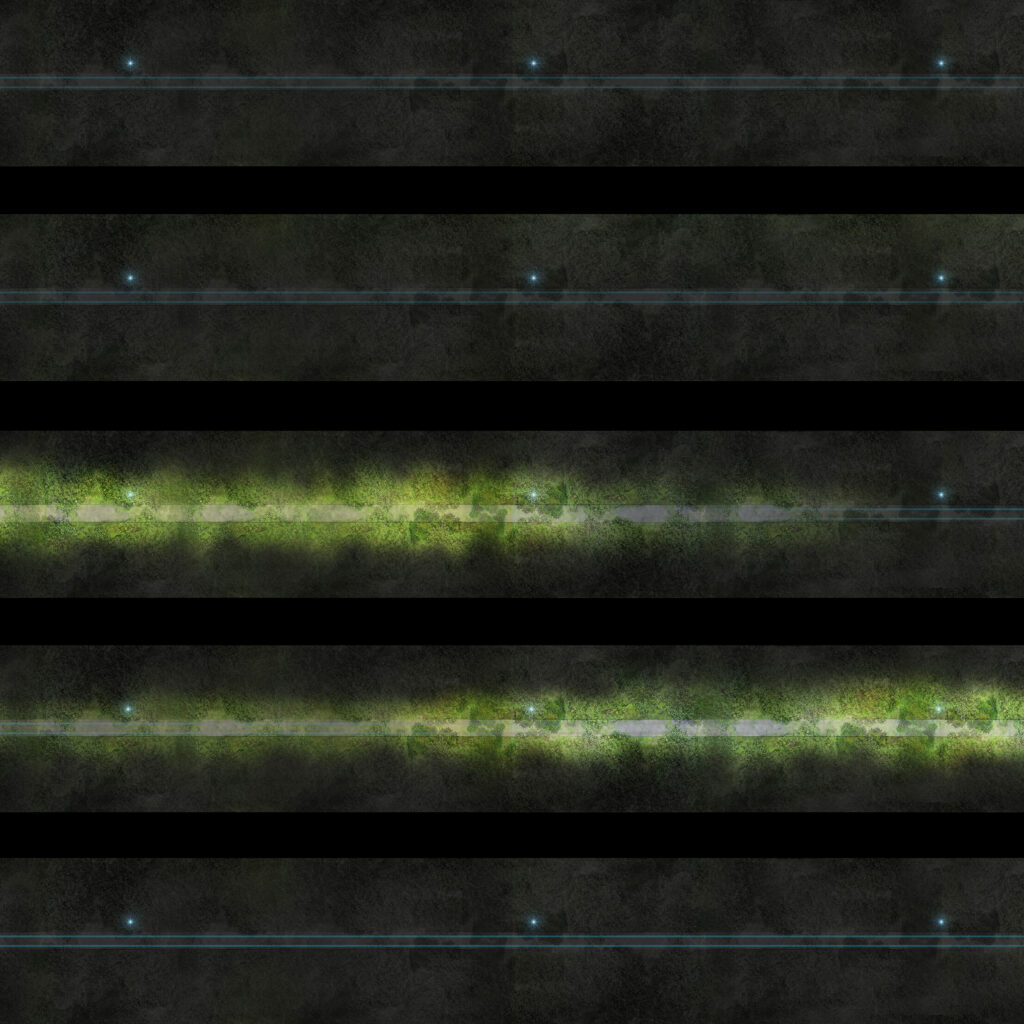 In 2017, the Borough of Ville-Marie will offer Montréal residents and visitors a revamped, friendlier Place Jacques-Cartier that will host lively activities year round.