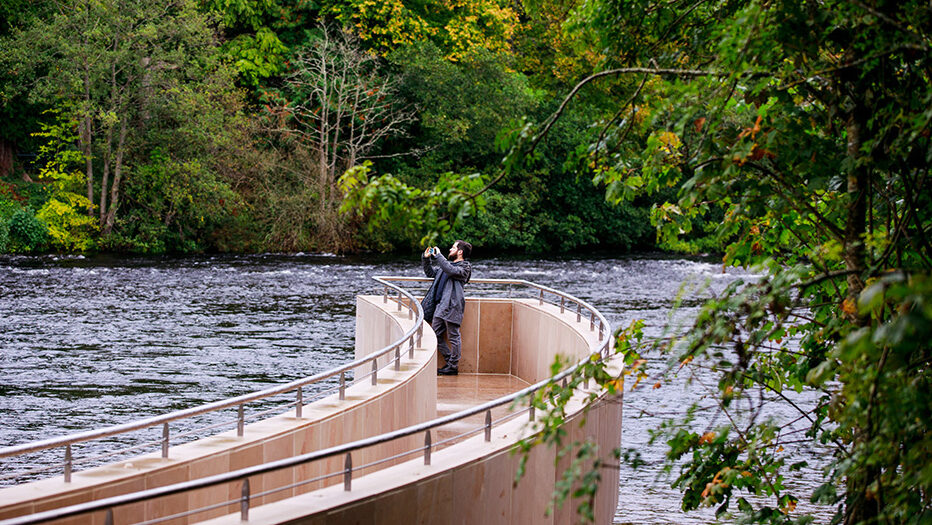 On October 7th, 2021, a major new public artwork opened in Inverness, Scotland. “The Gathering Place” consists of a bench-like platform or pier that branches into the city’s iconic River Ness. It invites visitors to re-connect the city with the river, to delve into the river’s stories and to celebrate its distinct character. It will be available permanently and is accessible for free.

The Gathering Place: A sense of place on River Ness

Inverness, the capital of the Scottish Highlands, has long been famous as the UK’s northernmost city. The River Ness shapes the cityscape but has at times been neglected by the public. This is why a collaborative team of Sans façon and KHBT for the City of Inverness have created an artwork to re-connect with the river.

According to the artists, “The Gathering Place” intends to “draw out the river’s stories, engender a sense of place and create access to the river”. It is located a short walk upstream from the city centre of Inverness and creates an interesting sense of place.

Shaped like a gentle curve, the artwork consists of local Clashach stone. It encircles a part of the river along the water’s edge and can be reached from the riverbank. The sculptural intervention starts out as a bench and resembles first a platform and then a pier. At its end, it offers views upstream towards Loch Ness, as well as downstream towards Inverness Castle. 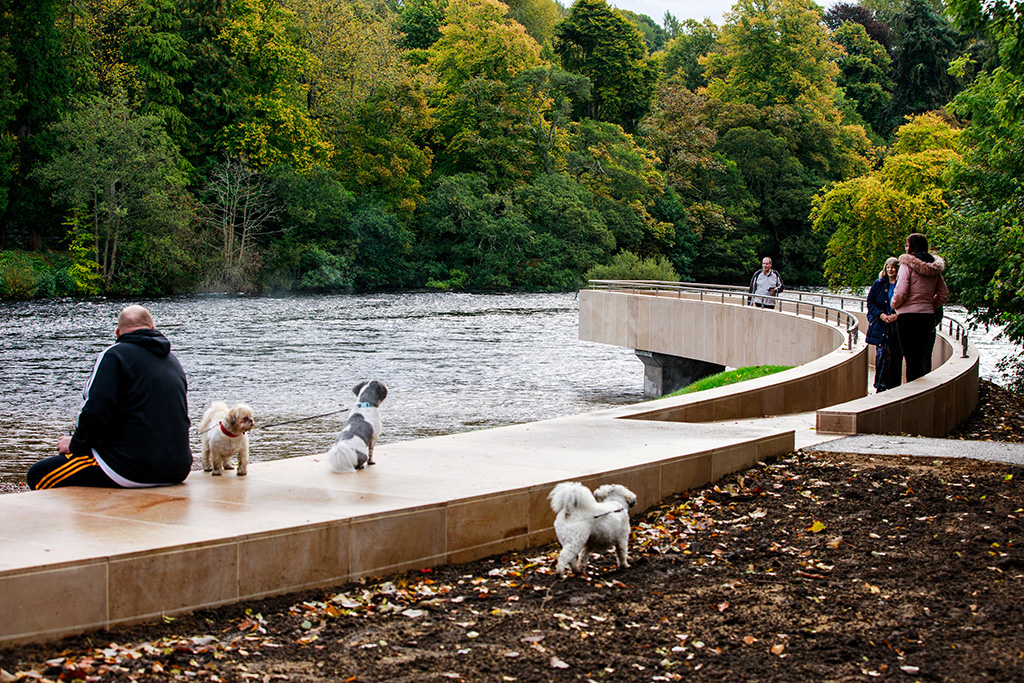 The Gathering Place on the banks of the river Ness, Inverness Scotland. Photo: Robert Omerod

The Gathering: A monument to the social and natural heritage of the river

The shape of “The Gathering” echoes the shape of the riverbanks. It aims to maintain a low and horizontal presence in order to not dominate the landscape. The river itself remains the focus and therefore becomes a gathering place in itself.

Tristan Surtees, of Sans façon, said: “The work in many ways is a monument to the social and natural heritage of the river, so important to keep and protect. It is a space to celebrate the sense of place, to interact, to enjoy the theatre of the river and to perhaps see the familiar anew.”

Karsten Huneck of KHBT added: “After the intense research including the collection of many stories of from the people of Inverness, it felt appropriate to create a minimal gesture that enhances the notion of the river being the main actor whilst creating a tangible connection between the spectators from both embankments.” 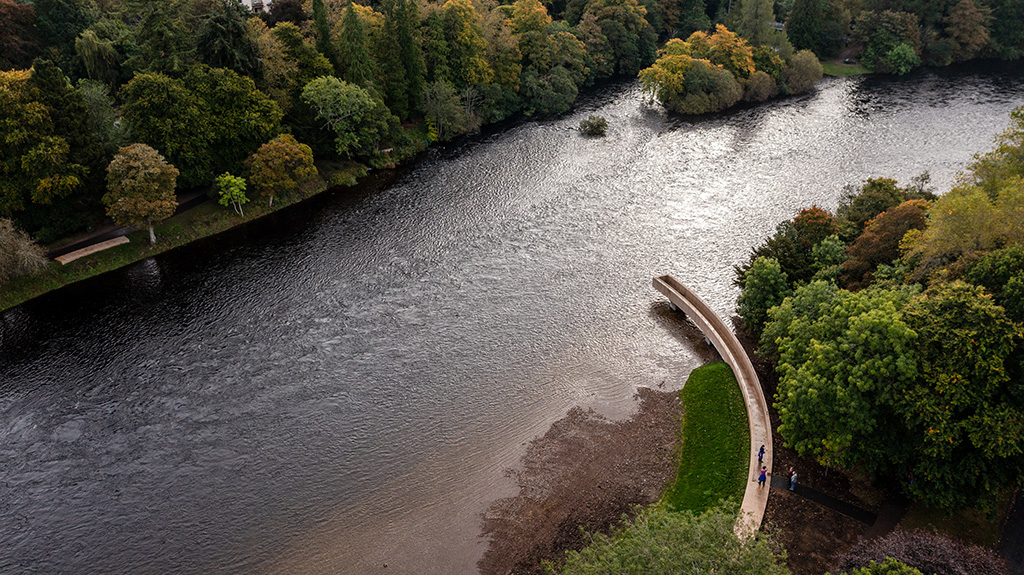 The artists chose Clashach stone as it is a particularly beautiful material that can be found in the region. Clashach comes from Moray and has traditionally been used for important local buildings such as Inverness’s “Town House”, but also for the Museum of Scotland in Edinburgh and even for Barcelona’s Sagrada Família.

To make sure that the artwork would not disturb its natural surroundings, the artists and their team worked with NatureScot, SEPA, Historic Environment Scotland, Scottish Forestry and flood risk management experts. Together, they made sure that the piece is durable and can withstand use and weather, while having little to no impact on wildlife, trees and the river’s natural habitat. 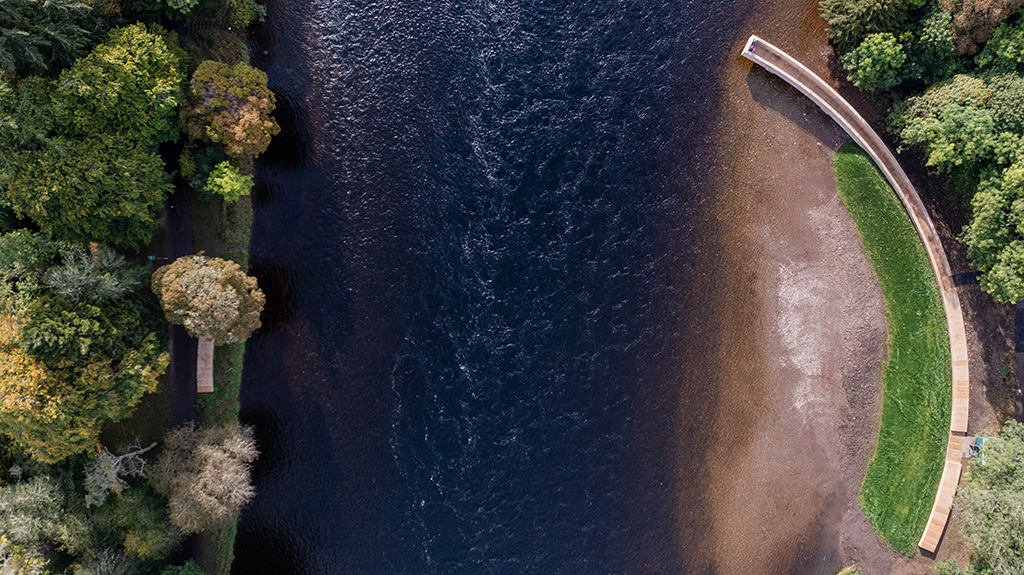 A space for contemplation and reflection

The work was constructed by Simpsons Builders from Beauly, a village only 5 miles away from Inverness. In addition, the people of Inverness participated in the design process and supported the pandemic-related delays patiently. The permanent addition to River Ness has gained much appraisal from the public.

Iain Munro, CEO at Creative Scotland commented: “The Gathering Place will bring people together and create a space for contemplation and reflection. “The impressive new work of art from award winning, world-renowned artists, Sans façon and KHBT will enrich the riverscape for both residents and visitors.” 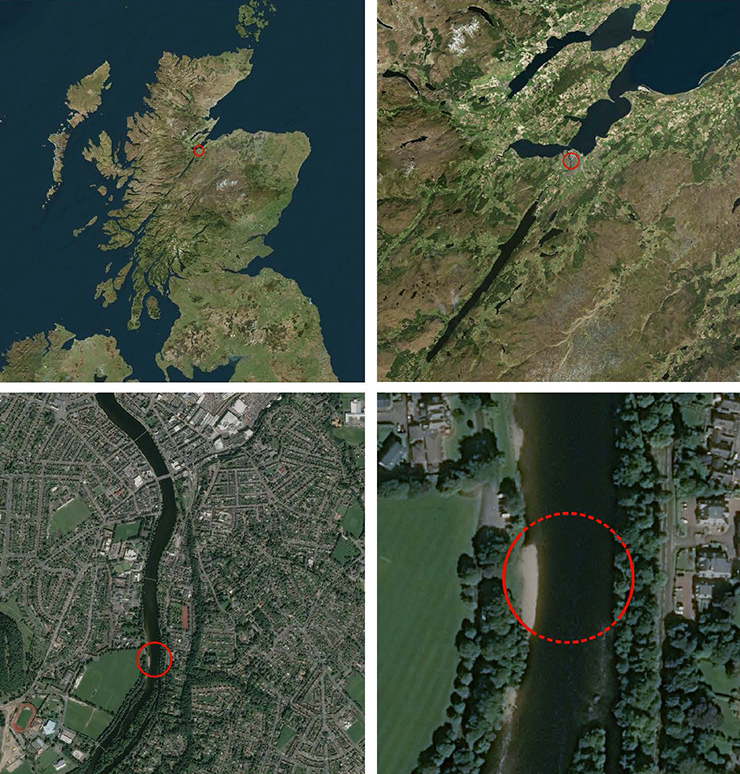 Chair of the ICArts Working Group, Cllr Isabelle MacKenzie, said: “The Gathering Place is an exciting new public artwork and we are delighted to have international artists Sans façon & KHBT involved in this project. Their unique artwork has taken inspiration from the River Ness incorporating the shore and water creating a truly individual urban architecture using local company Simpsons and locally sourced stone, with its connection to other well-known public buildings.”

She added: “The Gathering Place will allow the pubic to access all around the trail of the river, which is what was the original brief presented to the City Committee back in 2012. I would like to express my huge gratitude and appreciation to all those involved in this project; the working group, fellow councillors, council staff and outside representatives to allow us to be unveiling this new public art installation to Inverness.” 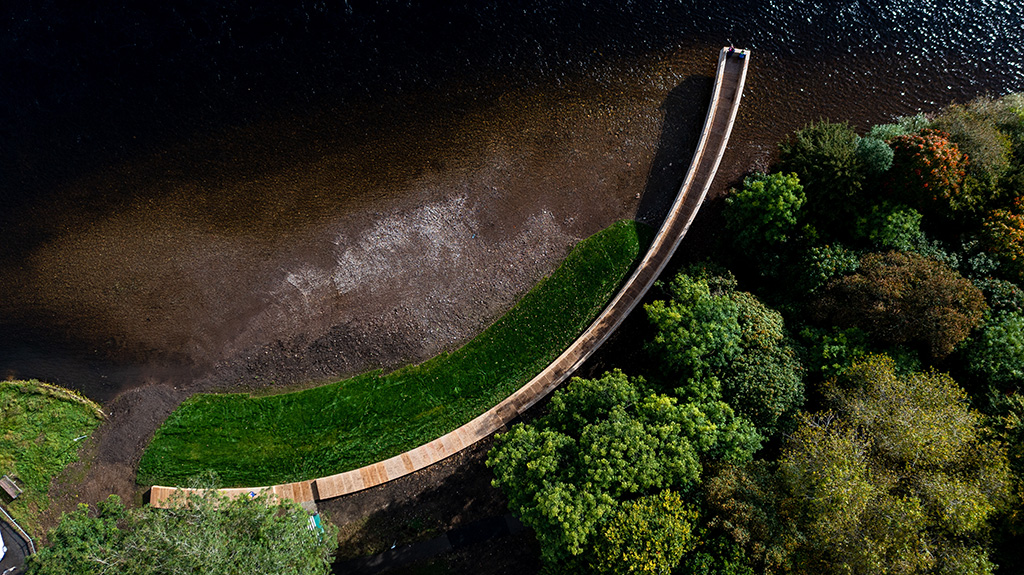 Sans façon and KBHT collaborated to create “The Gathering Place”. The former consists of Charles Blanc and Tristan Surtees, an artist duo that has worked together since 2001. Together, they explore the relationship between people and place through ephemeral performances, temporary installations and large-scale permanent artworks. One of the duo’s many awards is the 2021 Canadian Society of Landscape architecture highest award of excellence for Dale Hodges Park, in Calgary, Canada.

KBHT is a creative studio based between London and Berlin. Karsten Huneck and Bern Trümpler, the two founders, focus on experimental spatial art, winning various awards such as the prestigious Young Architect of the Year Award in 2009.

The River Ness Public Art Project was conceived by the city committee with the intention to encourage more interest in the River Ness. As the project’s first public art commission, “The Gathering Place” is funded by Creative Scotland, Highlands and Islands Enterprise, Highland Council and the Inverness Common Good Fund. It was commissioned in 2017 and opened in October 2021. 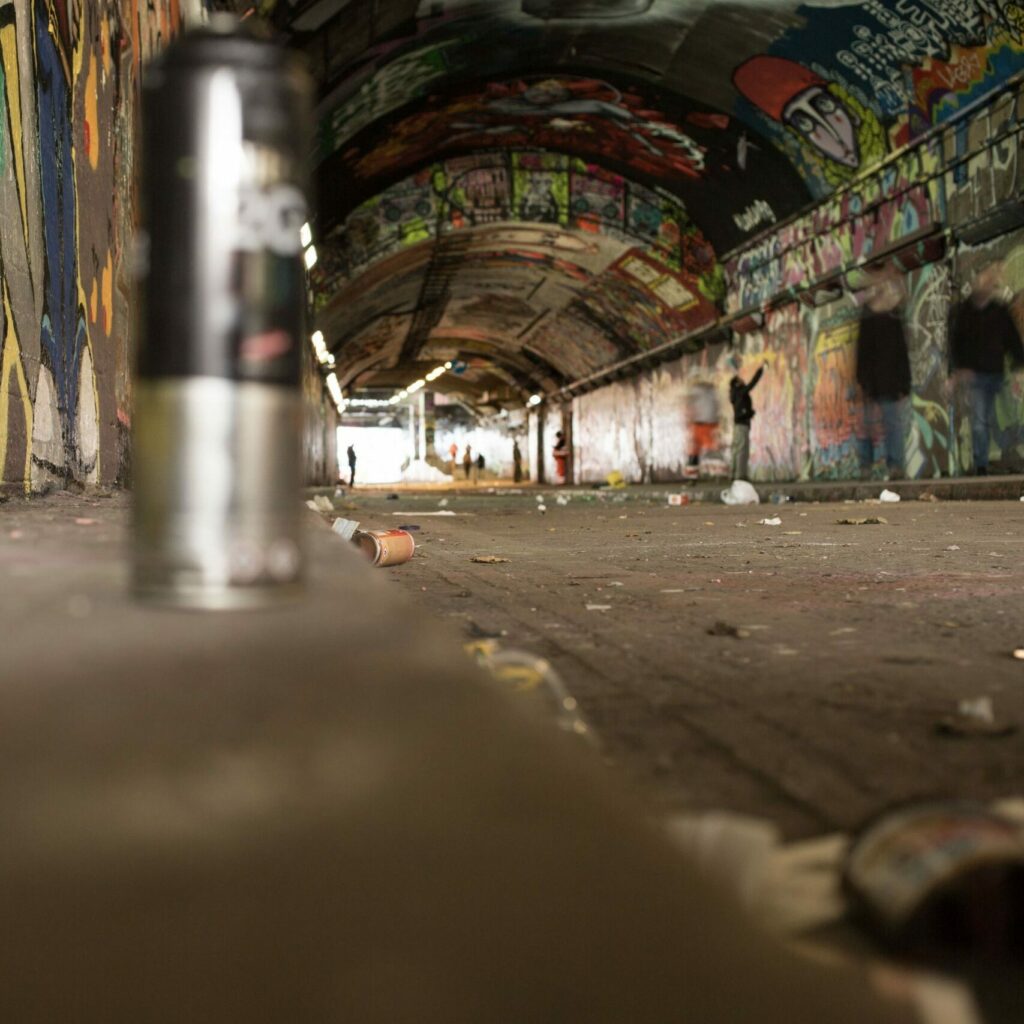 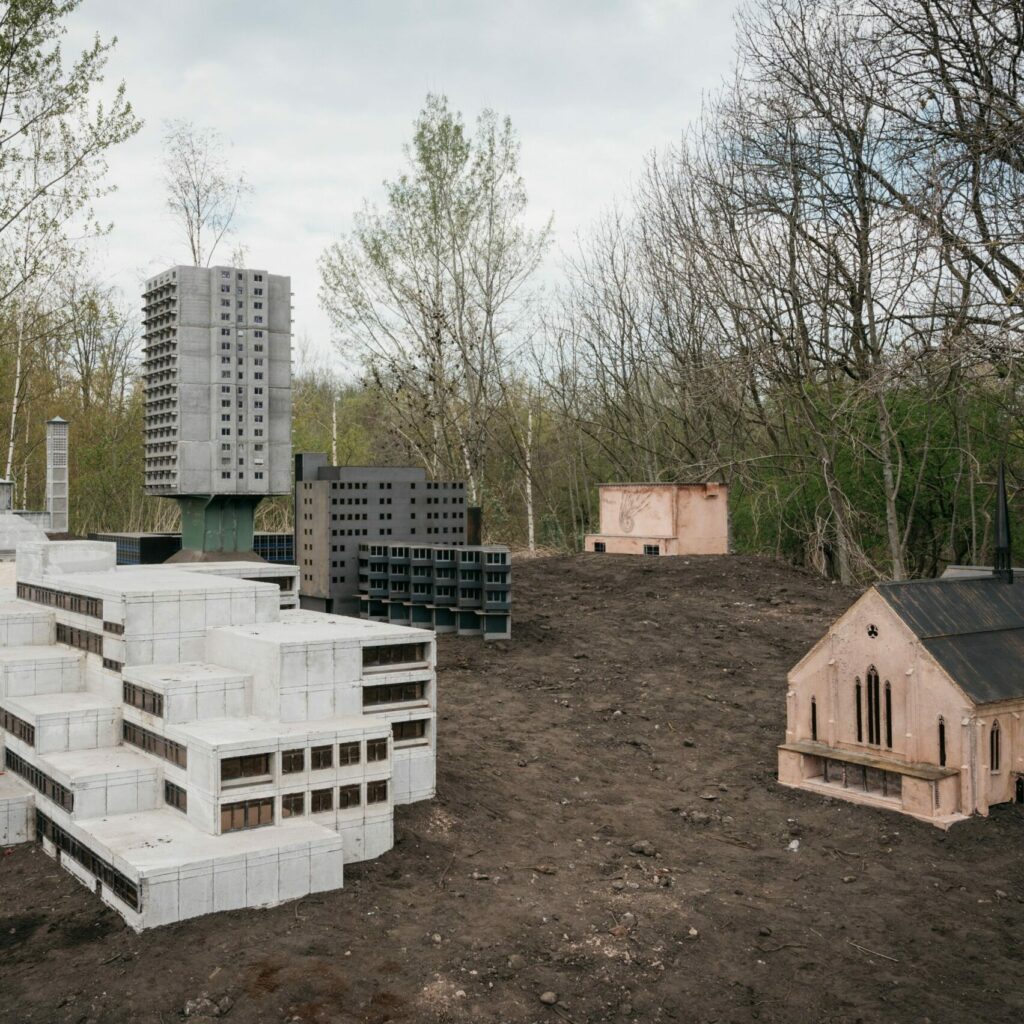 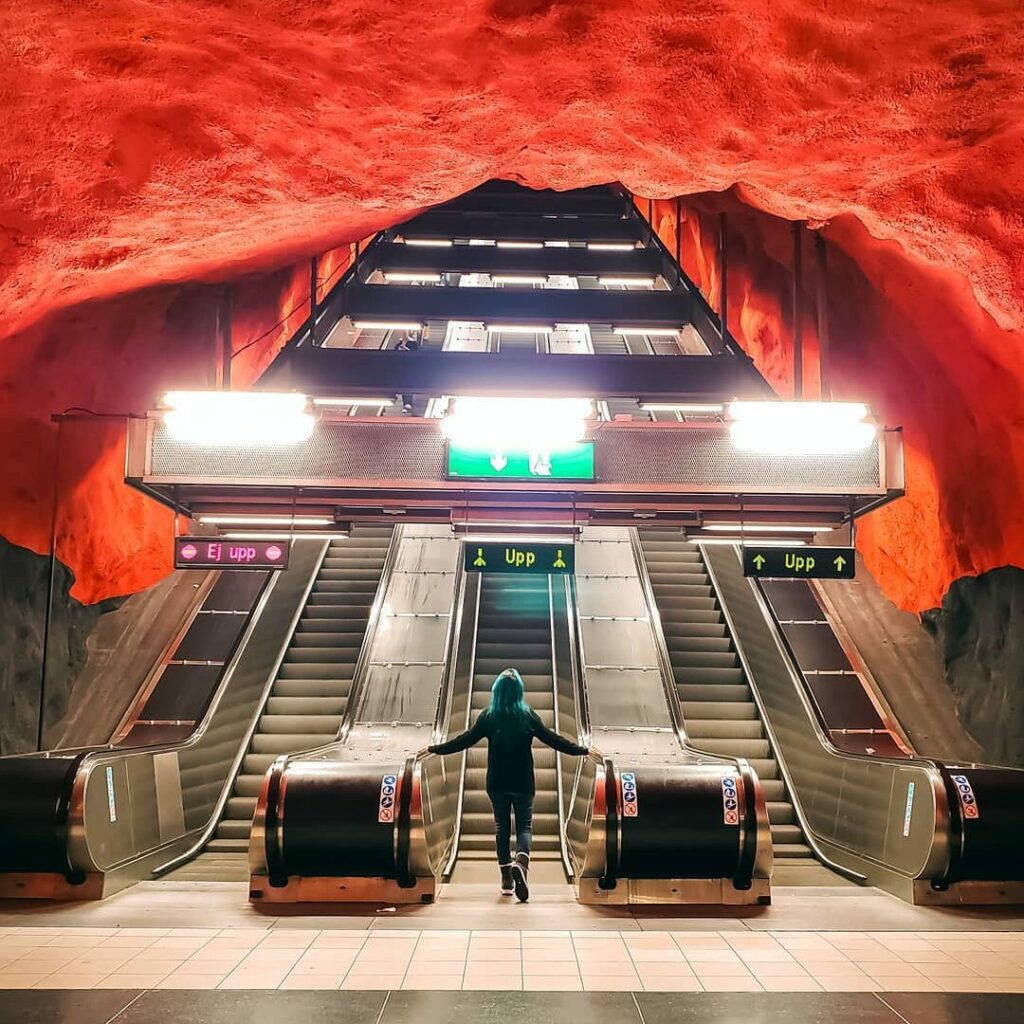