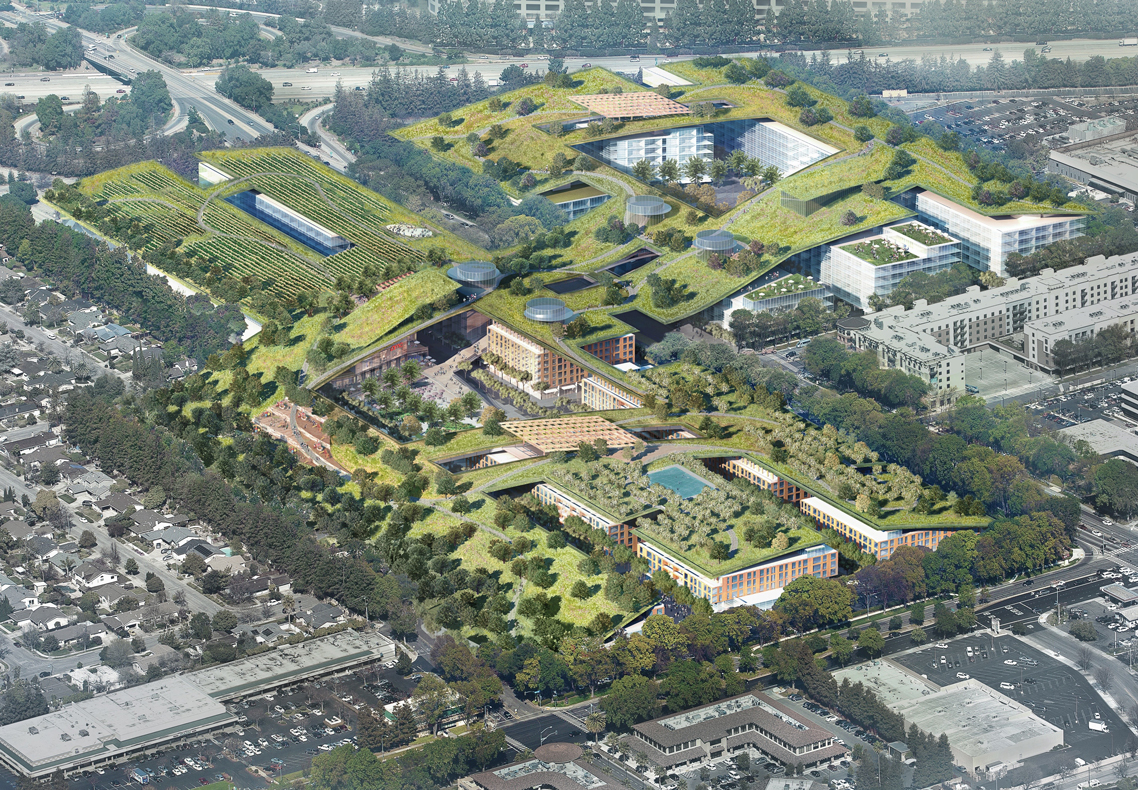 The Hills at Vallco will be the world's largest green roof.

The Sand Hill Property Company plans a new city center in Cupertino in the Silicon Valley, California. The outdated Vallco Shopping Mall is about to become The Hills at Vallco. The 30-acre park will not only be the largest community green in Cupertino, but the world’s largest green roof. Before Rafael Viñoly Architects and OLIN Landscape Architects created the design, Sand Hill asked residents and entrepreneurs in several meetings about their ideas and dreams, almost 3.800 suggestions were collected.

The design of the green roof is ambitious: a 3,8 mile track for walking and jogging, orchards and organic gardens, a vineyard, an amphitheater, children’s playgrounds and a refuge for native species of plants and birds. The greening will be adapted to the hot and dry climate of the area. The green roof is part of the energy concept of the complex and –combined with natural ventilation and smart technology – is to regulate the temperature in and around the buildings. Recently more and more projects –and even whole cities such as Paris – focus on roof and facade greening to cope with extreme temperatures.

Once a thriving spot in the city, the Vallco Shopping Mall has lost most of its tenants and costumers, over 50 percent of the building are empty. In 2014, Sand Hill bought the Mall and all of its 50 acres from the four owners. For the first time a unified vision is now possible. “We’ve done some research and we haven’t found a single shopping mall that’s started construction since 2006. This is clearly a dying model. That’s on display at Vallco”, says Reed Moulds, Managing Director of Sand Hill. The huge empty concrete massif is surrounded by the empty parking slots, totally lost in Cupertino. “I think there’s going to be a lot of opportunities to be very creative about how we reinvent our malls that aren’t used the way that they’ve been used in the past.”

The Hills will offer space for retail, restaurants, 800 accomodation units and entertainment plus venues for ice skating, bowling, sports and an AMC Theater. There will also be room for the whole life cycle of companies – from Start Up to established business – on more than 2 million square feet of office space.

Additionally to the project Sand Hill aims to change transport and education in Cupertino. Infrastructure is to be changed in favor of pedestrians and cyclists; residents will be able to use a shuttle-bus for free. A new elementary school and an innovation center will support children and teenagers in their development. The mixed-use innovation center will serve as a hub for work-based learning initiatives with workshops, room for exhibitions and robotics competitions.

The project is a 3 billion US-Dollar investment in the technologic heart of the United States. Cupertino is home to many advances in information and computer technologies, that changed everyday life forever. Computer company Apple is the most important employer for the 60.000 inhabitants, the construction of Apple Campus 2 will surely cement this fact. The Hills at Vallco will only profit from the development, as it will be located between Apple’s Infinite Loop headquarters and Apple Campus 2. Currently the project is in the official approval phase.

All visualizations: The Hills at Vallco. 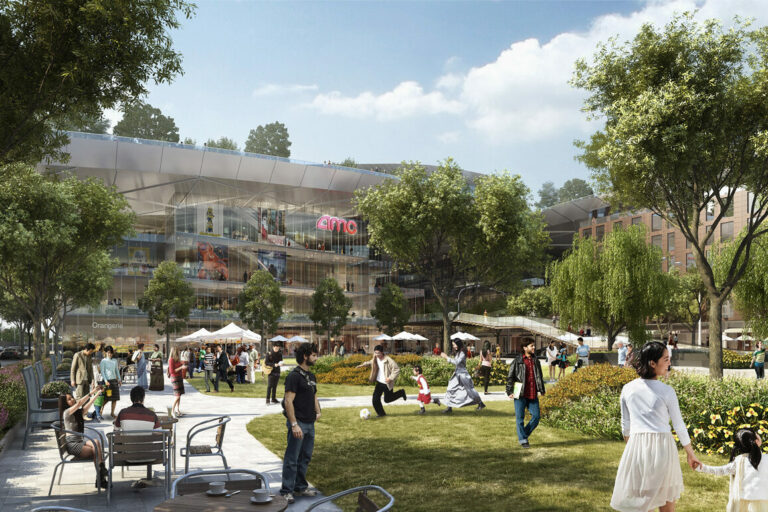 By day people can meet during lunch break in on of many parks and green areas. 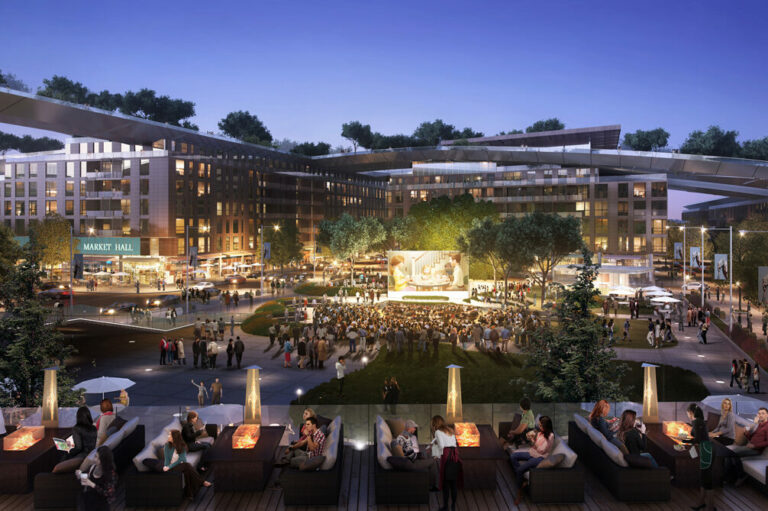 By night the amphitheater will entertain residents and visitors of the Hills. 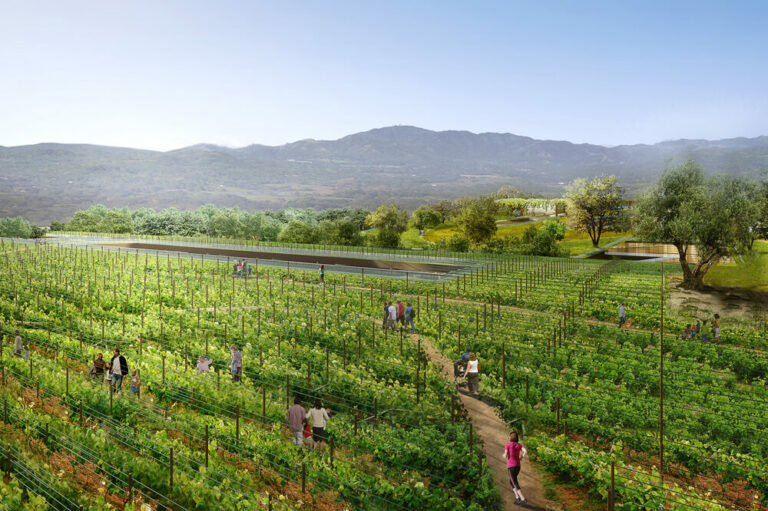 The vineyard at the Hills at Vallco. 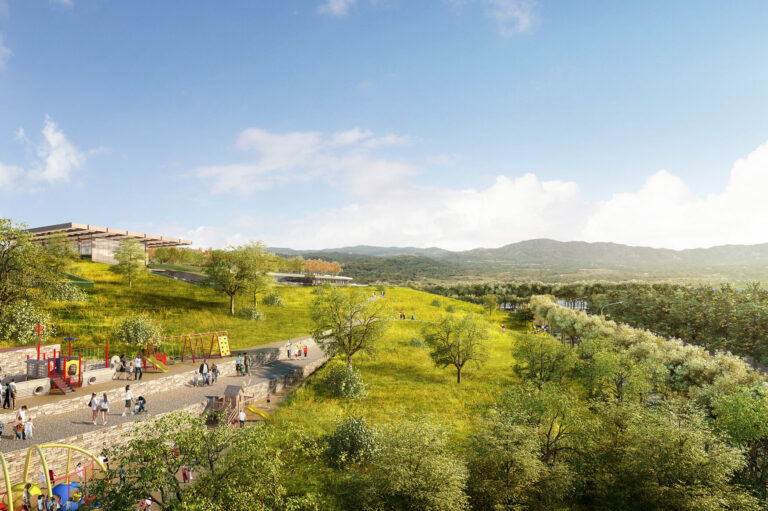 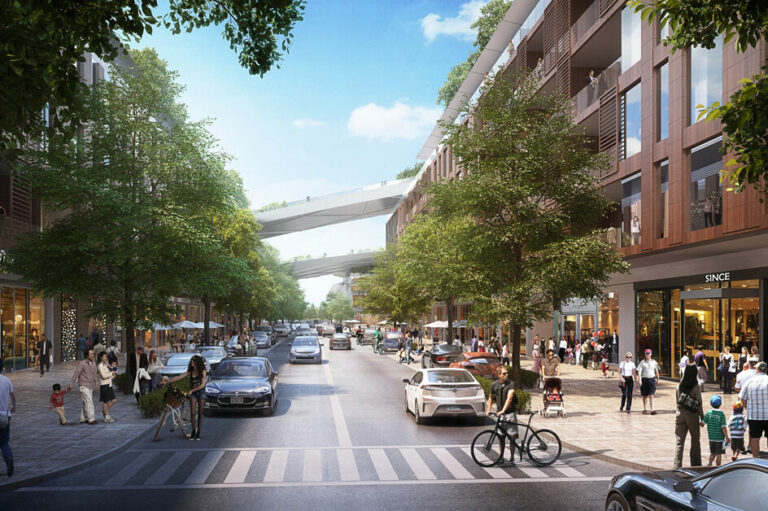 The transport via community shuttle will be free for residents. 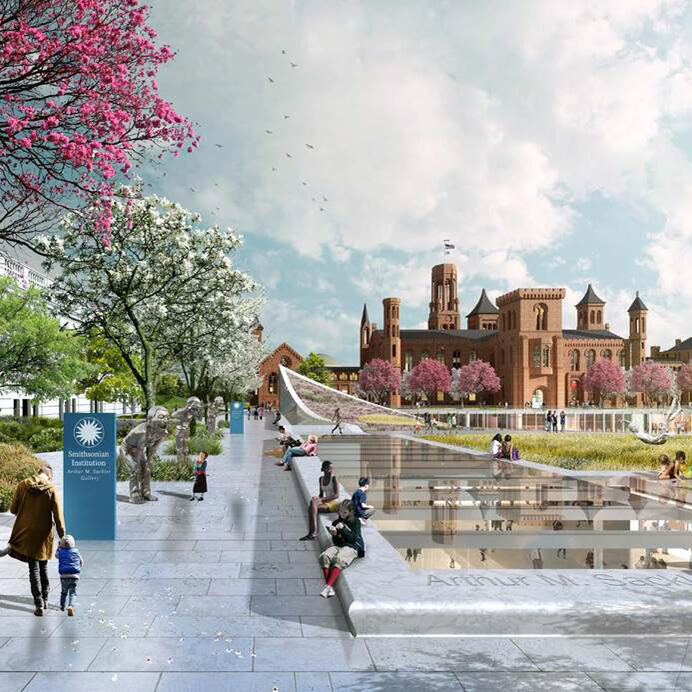 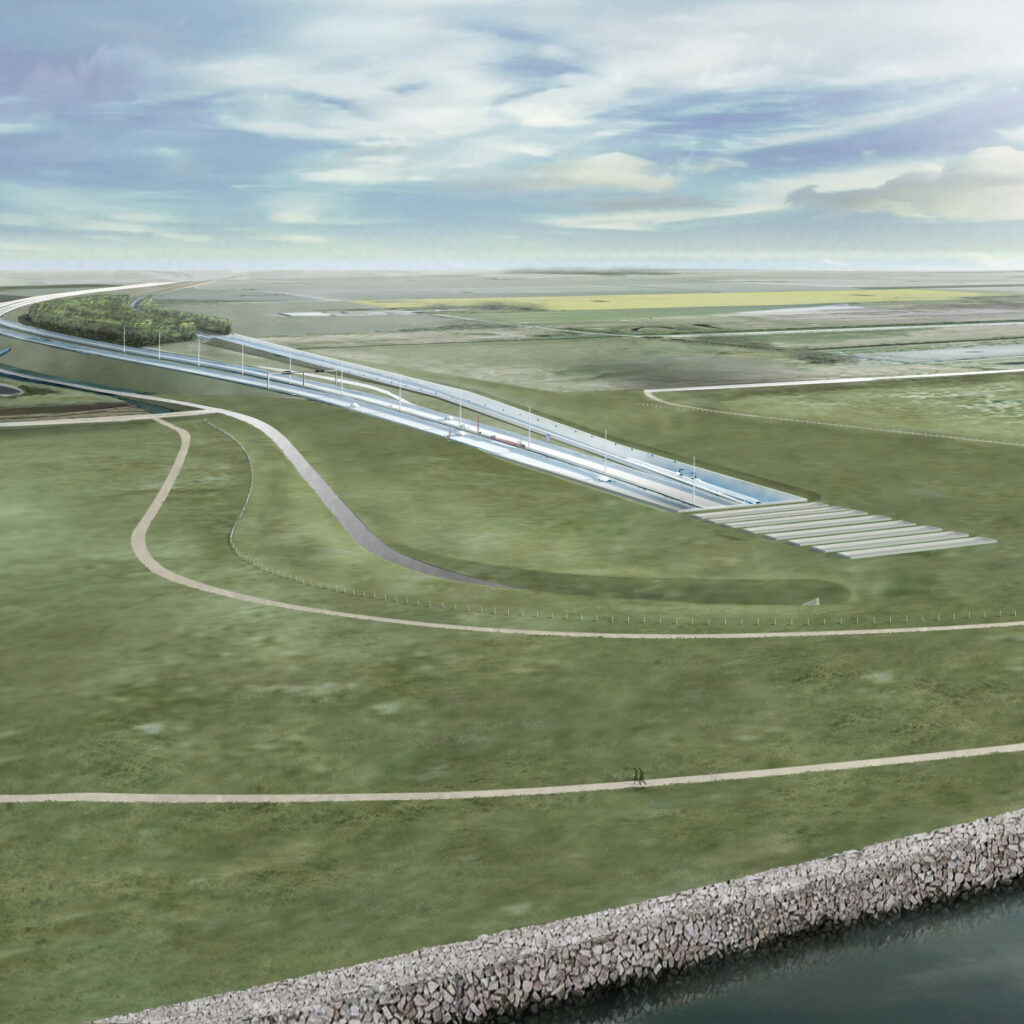 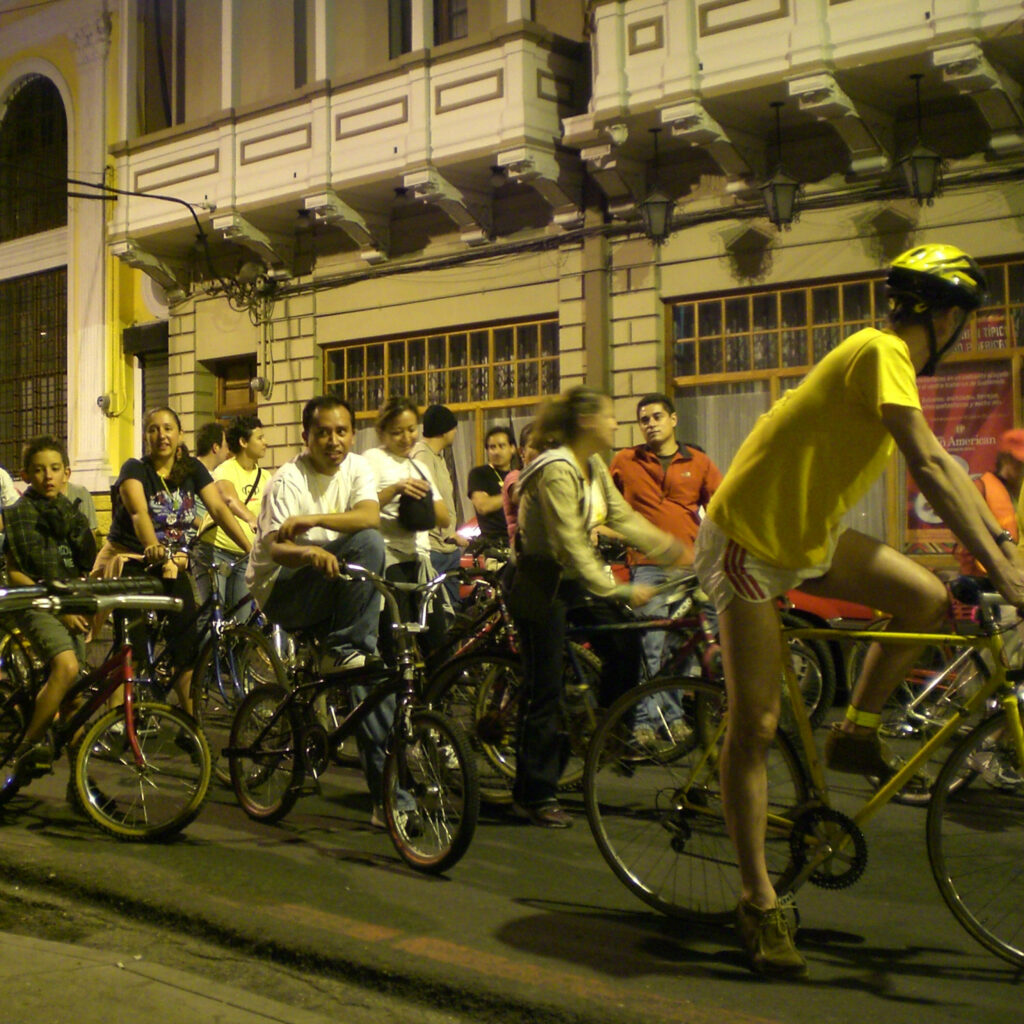 The St. Pauli City Garden on the Bunker in Hamburg, Germany, integrates the neighbors in the planning process of a public roof-garden.

The Bunker in St. Pauli in Hamburg faces a make-over. The planned roof garden will be open to the public. (Visualisation: Planungsbüro Bunker)