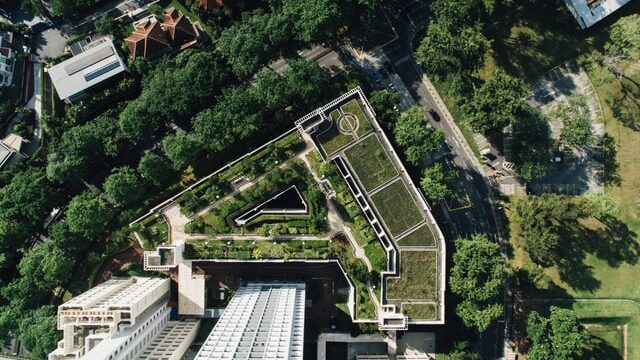 Not every roof is suitable for green roofing. What you need to know about green roofs and how to install them, you can read here.

Green roofs look good and provide a better climate inside and out. But not every roof is suitable for greening. Here you can read what you need to know about green roofs and how to install them.

The first green roofs mentioned in historical records are probably the “Hanging Gardens of Babylon”, which were built before the beginning of our era. Even then, citizens appreciated the advantages of greenery on the roofs, especially the visual enhancement of the cityscape. But the climate of the rooms located under green roofs also improves: In summer, the green roof cools through light absorption, light reflection and the evaporation of water. In winter, on the other hand, the green roof provides an insulating layer against the cold.

However, the main disadvantage of a green roof is the higher initial cost compared to a normally covered roof. Consequently, the expense of waterproofing against penetrating humidity and ingrowing roots can double the cost of a green roof compared to a normal roof. Depending on the type of green roof, the ongoing maintenance costs may also be higher than for an ungreened roof. In addition, the load-bearing capacity of the roof structure must be checked. Green roofs can also cause considerable additional area loads and many roofs are therefore statically prohibited for this. Moreover, from a roof pitch of ten degrees, it may be necessary to secure the green roof to prevent it from slipping.

Not all green roofs are the same. A distinction is made between extensive, intensive and semi-intensive Image © Tommy Kwak 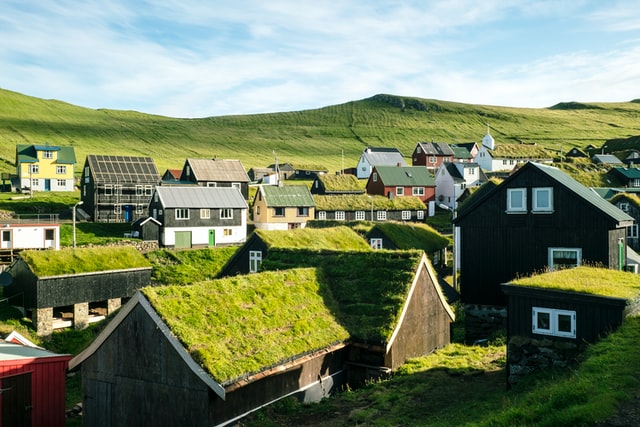 Green roofs divide into extensive, intensive and semi-intensive green roofs. How to distinguish between them, read below. 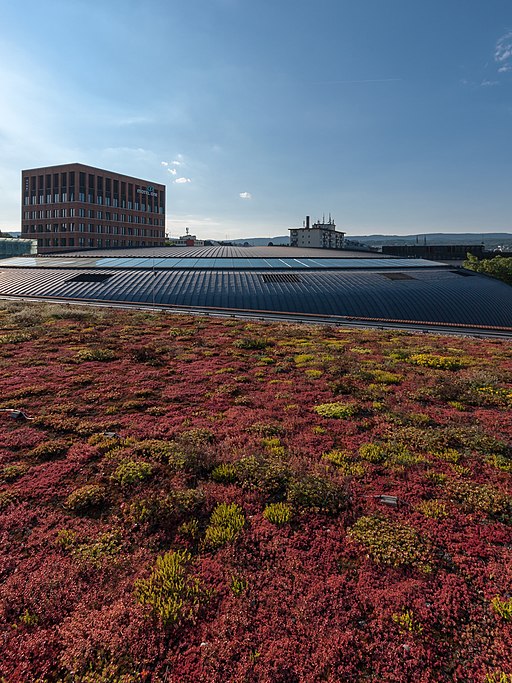 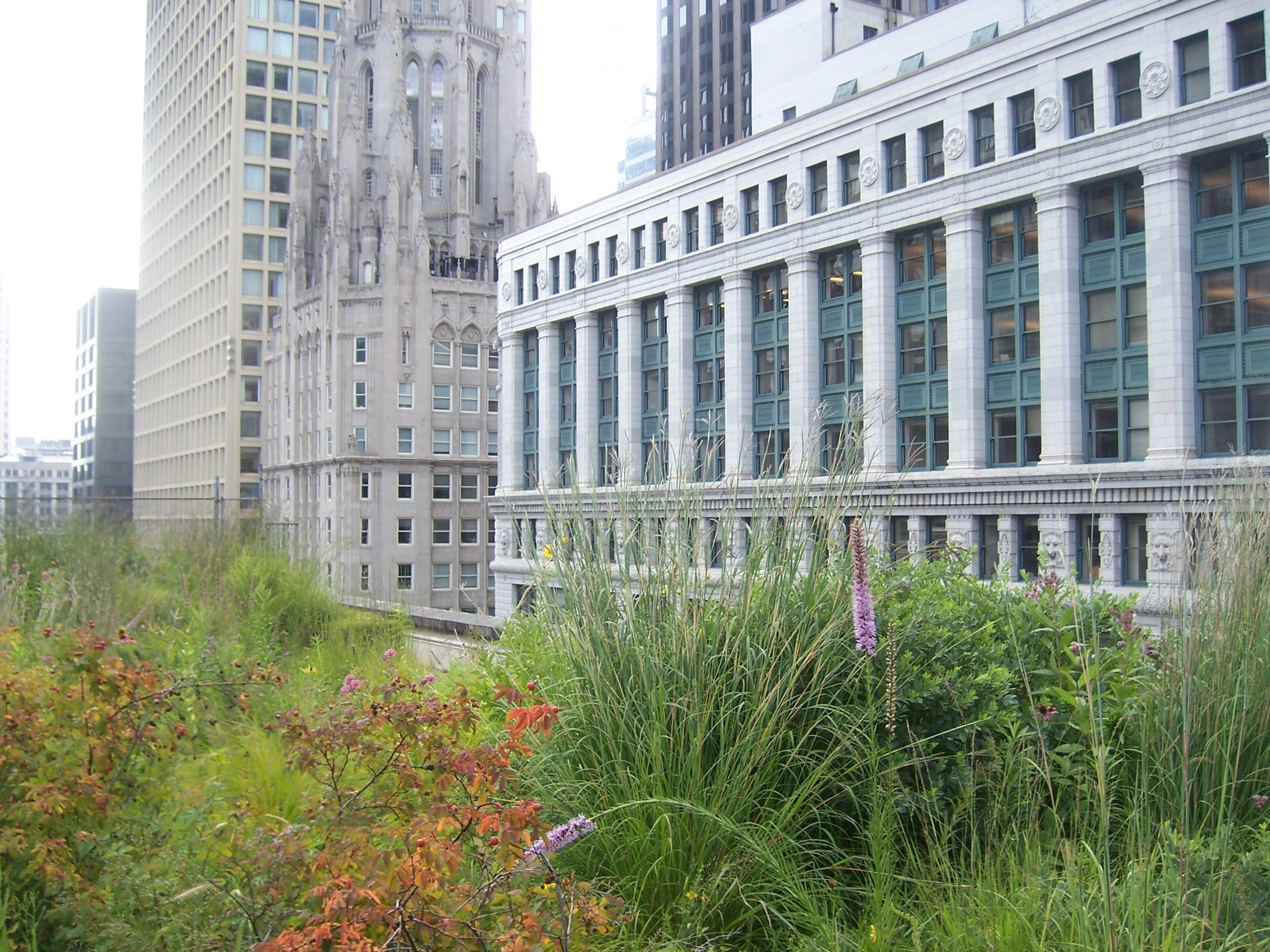 Mixed form of both above methods with higher layer structure than extensive planting, but with less demanding planting than intensive.

Do you want to green a roof or several roofs? Then you should consider the following points.

With the BUGG Market Report Building Green 2020, the german Bundesverband GebäudeGrün e.V. (BuGG) published for the first time an overview of the currently most important figures on green roofs, green facades and indoor green spaces in Germany. The report makes it clear that building greening is no longer just a niche product. The green building market is growing and this is reflected in the large number of green roof projects, among others, according to the official report. 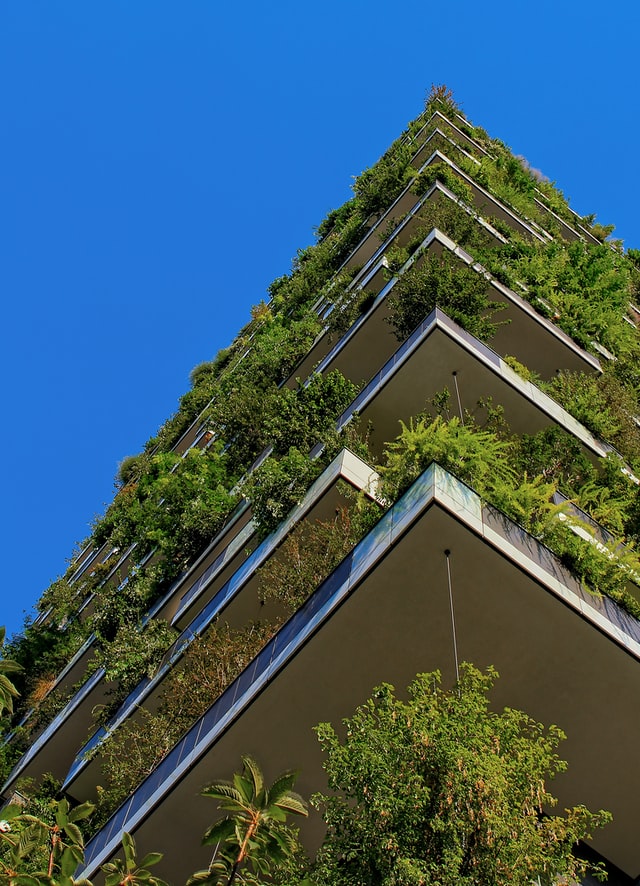 In recent years, firstly, more green roof projects have emerged in general, and secondly, the names of the firms commissioned are also growing. For example, Bjarke Ingels Group (BIG) and Heatherwick Architects are currently working on a green roof lighthouse project for Google’s London headquarters. But Herzog & de Meuron are also implementing a major rooftop garden project in the south of Basel in the coming years. We have compiled a selection of the largest and most important green roof projects of recent years here.

The green roof of Chicago City Hall is one of the most famous examples of green roofs. It was equipped with a total of 3,600 square meters of green space in 2001. More than 20,000 plants of 150 different species provide, among other things, about 90 kilograms of honey annually, which bee colonies located on the roof produce. 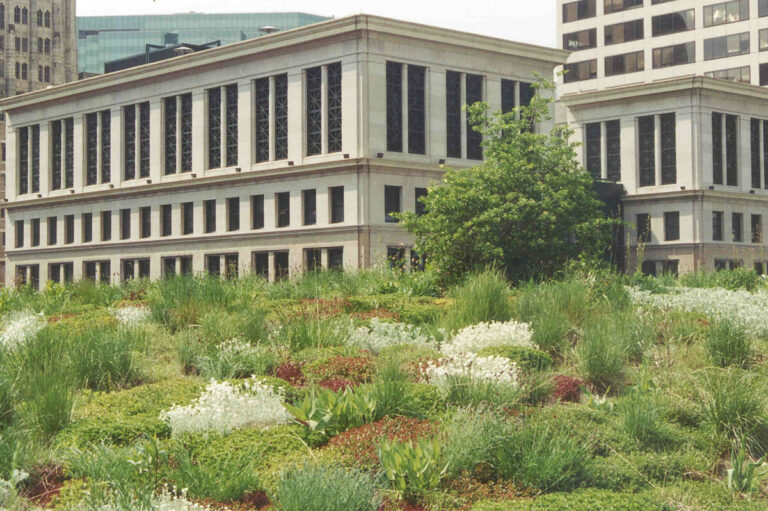 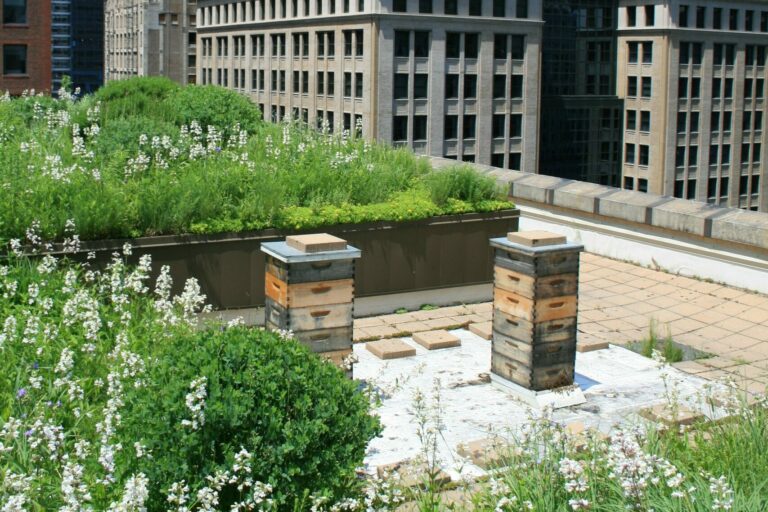 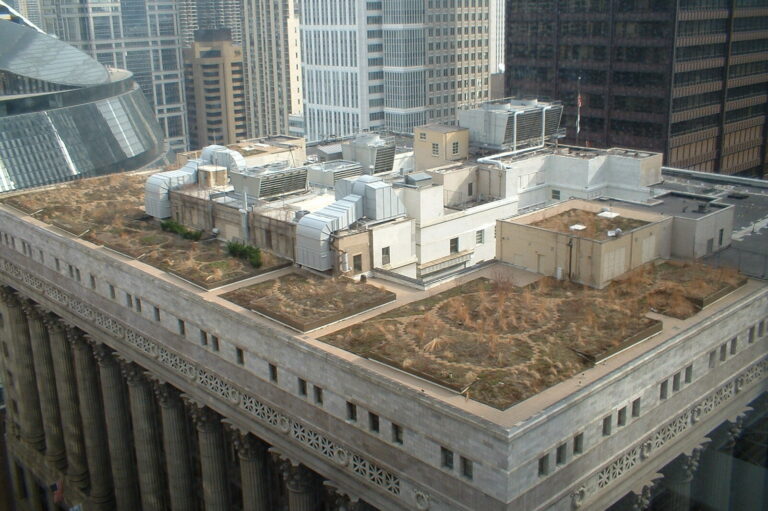 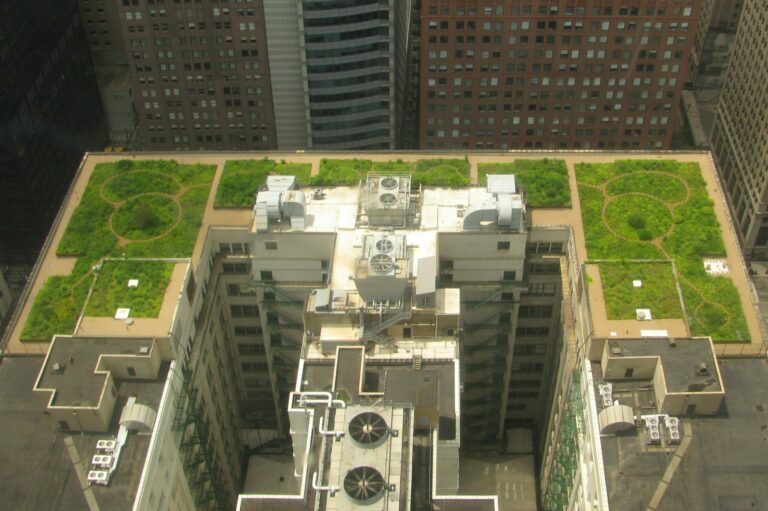 The roof garden landscape in the “Namba Parks” office and shopping complex extends over eight floors and thus serves as an inner-city oasis.

Namba Park in Osaka: On the left, the green space with the canyon; on the right, the residential and office tower. Image © Mike Swigunski/Unsplash 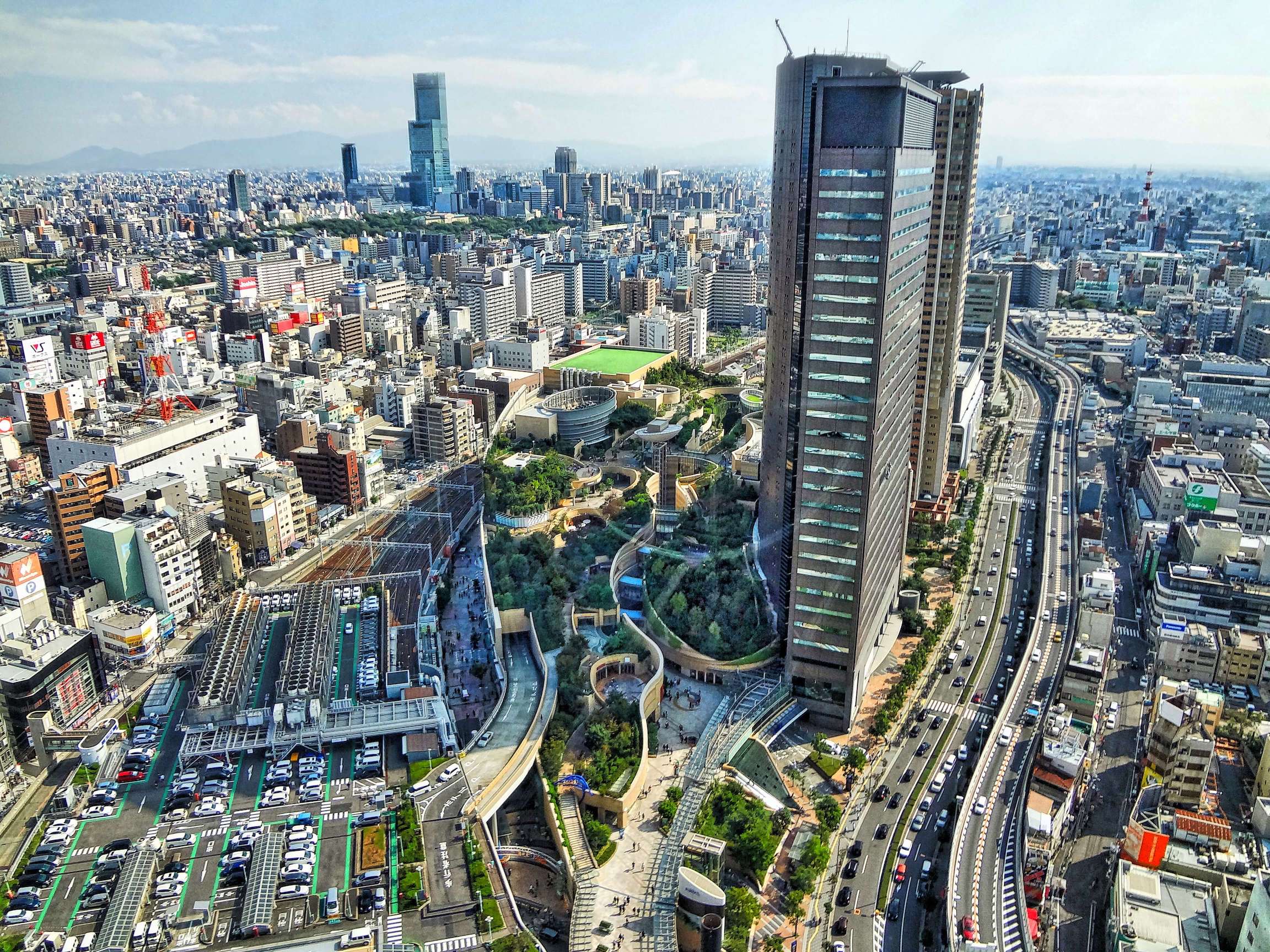 The Osaka Stadium was originally designed for baseball by Japanese architect Sakakra Junzō in the 1940s. When it was finally closed in 1998, it began to fall into disrepair. It wasn’t until 2000 that it was torn down. Nankai Electric Railway owns the site, which lies next to Namba Station. Knowing that the first thing that people arriving by train would see of the city was the building on this site, the owner, Nankai Electric Airway, commissioned the planners from Jerde Partnership. Nankai Electric Railway asked them to design a gateway into the city that would redefine Osaka’s identity. 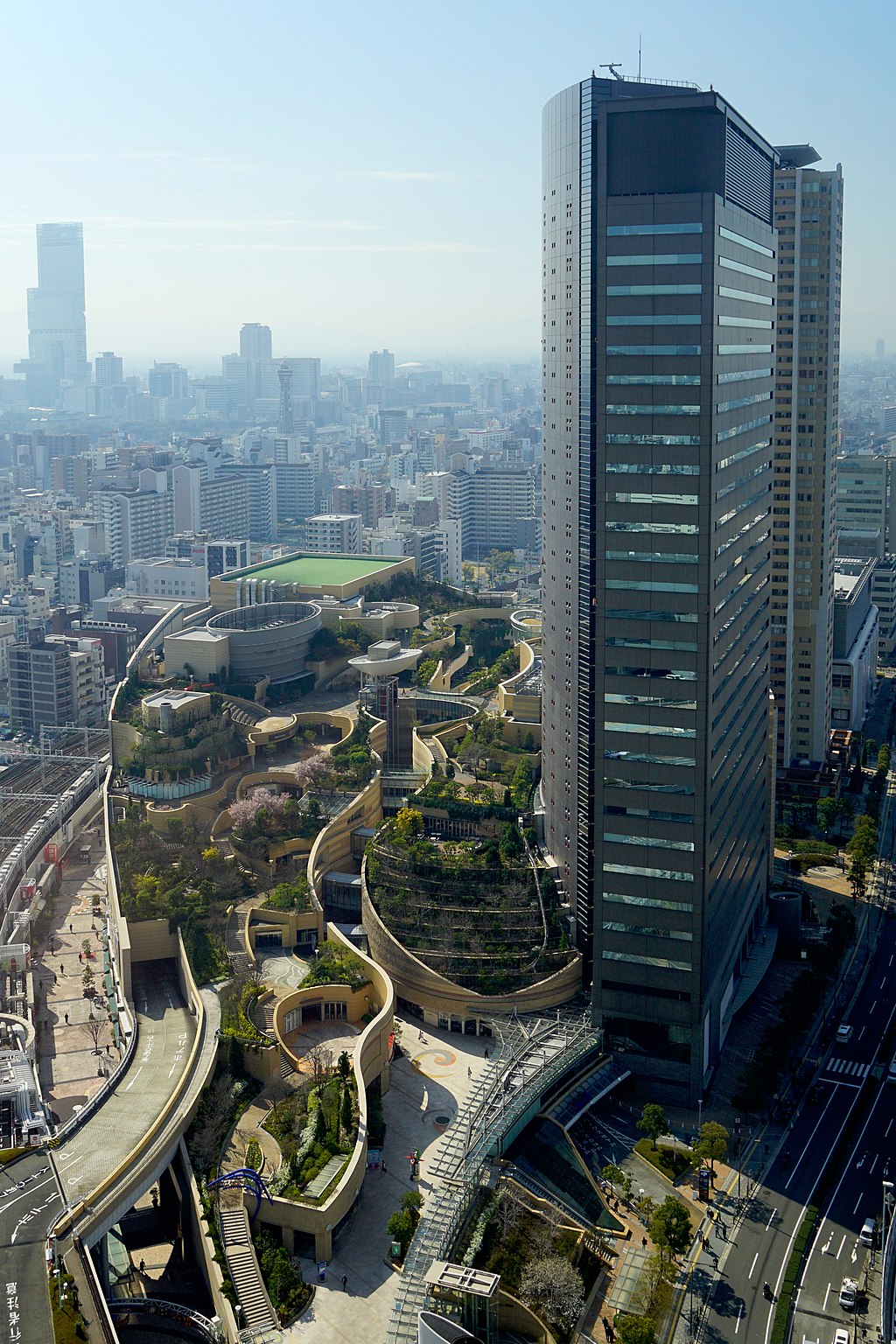 Osaka is a dense city – Jerde describes the environment as harsh. For this reason, the planners responded with a nature experience. Their goal was to celebrate nature and recreation, to connect people and cultures. To achieve this, Jerde planners designed a 30-story office tower and shopping center. This also houses the heart of the project: Namba Park. Visitors climb eight stories to the roof of the shopping center. And this roof is green throughout – they climb through nature. Almost like climbing to the top of a mountain.

A winding path representing a canyon divides the park level. Inbetween trees and water features, terraces and wide green spaces lend themselves to be used by visitors as recreational areas. In addition, there is an amphitheater and areas for community gardens and wagon stores, ponds and shrubs. All of this is irrigated by treated wastewater from the restaurants in the shopping center.

The project in the middle of Osaka’s business district is smart, sustainable, and at the same time transit-oriented. Jerde Partnership was able to reconcile the economic benefits with your environmentally friendly design.

The Kö-Bogen II in Düsseldorf is striking, and immediately so. That’s because of its green façade – a façade unlike any other in Germany. Christoph Ingenhoven Architects had a total of 30,000 plants installed along three of the five sides of the building. This also includes the roof.

The Kö-Bogen II in Düsseldorf is greened on three sides – including the roof. © ingenhoven architects / HGEsch

Christoph Ingenhoven wants to give as much green space back to the city as possible (Read more about the project and Ingenhoven’s concept at our colleagues’ in G+L 11/21.) The grove hedges at Kö-Bogen II (a native plant species) are not accessible to the public. Nevertheless, the benefits of the plants can be felt. In summer, for example, the plants shield the sun’s rays and reduce the inner-city heat effect. At the same time, they bind carbon dioxide, absorb moisture and dampen noise. Another plus: they promote biodiversity.

In autumn, the leaves of Kö-Bogen II turn brown and stay that way until spring © ingenhoven architects / HGEsch 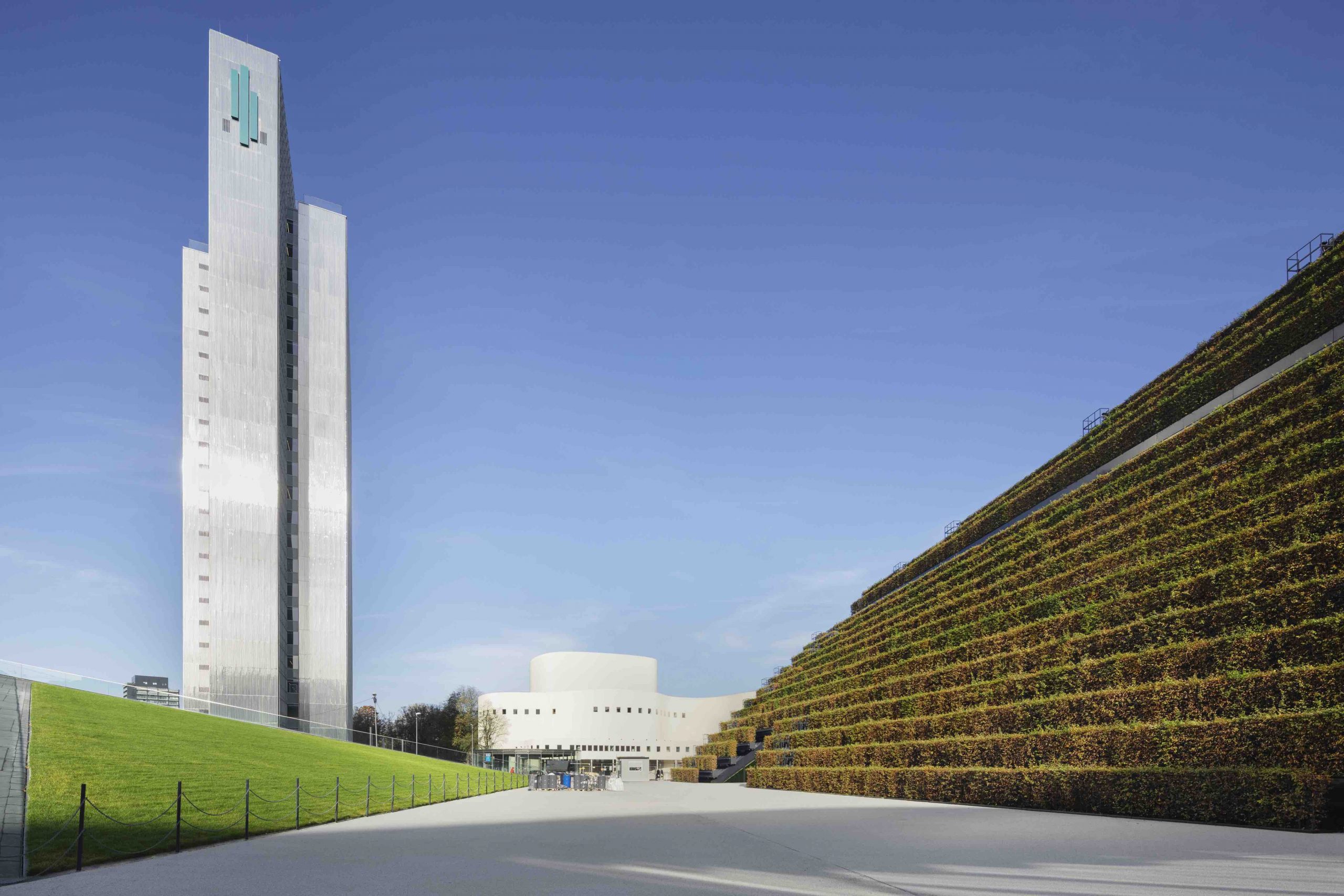 The plant is very resilient – even in the city – and does not need water in winter. This is because it does not bear active foliage during the cold months. Instead, the leaves turn brown and remain attached to the shoot. They only fall off in spring, shortly before green shoots sprout again. In addition, the hornbeam hedges are difficult to ignite – an important safety aspect.

A specialist company was hired to maintain the grove hedges. In addition, the planners installed walkways between the hedges and provided access facilities in the vertical areas.

Find out more about green roofs in this article about the DAM exhibition “Greening the City”. 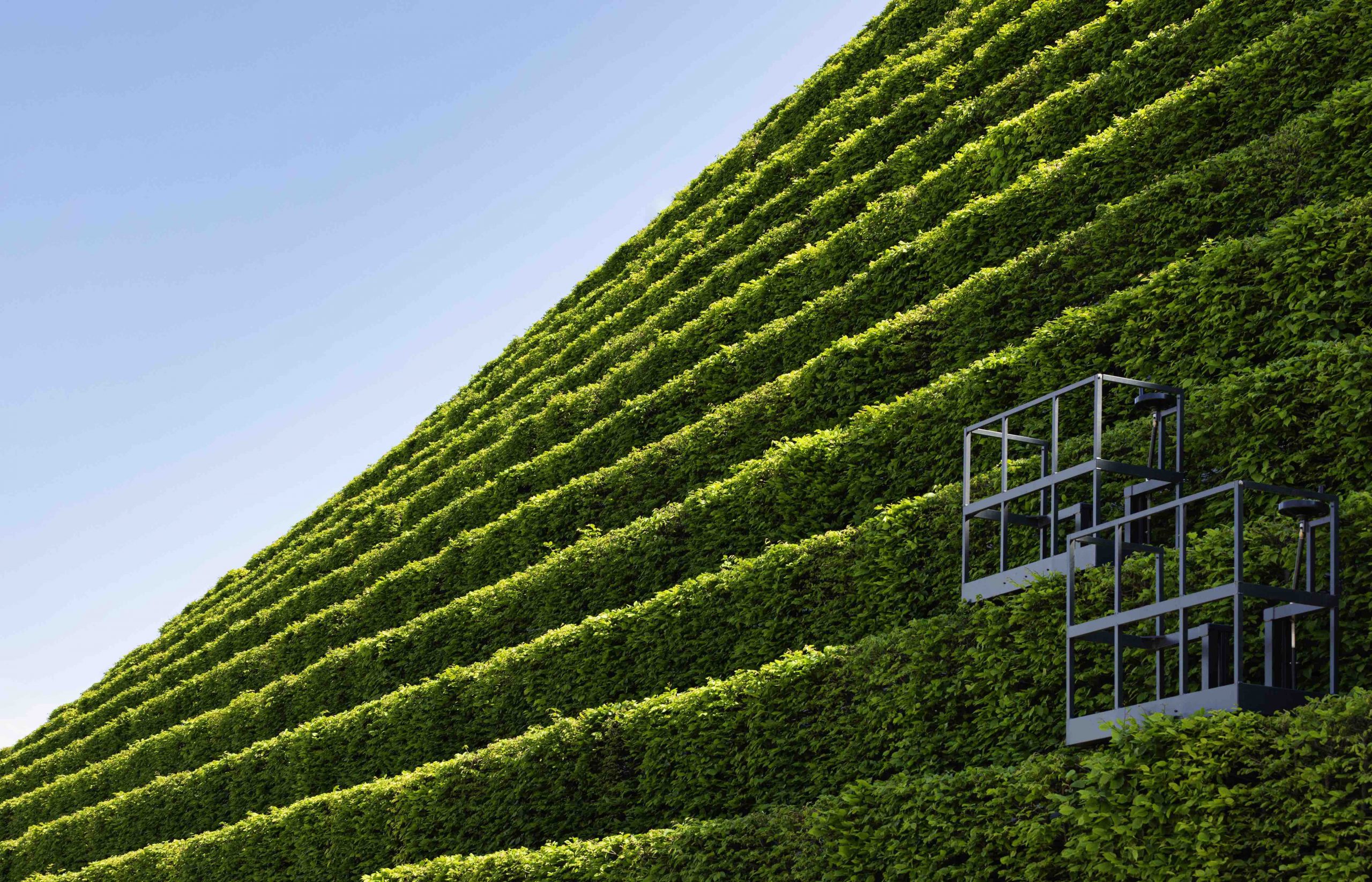 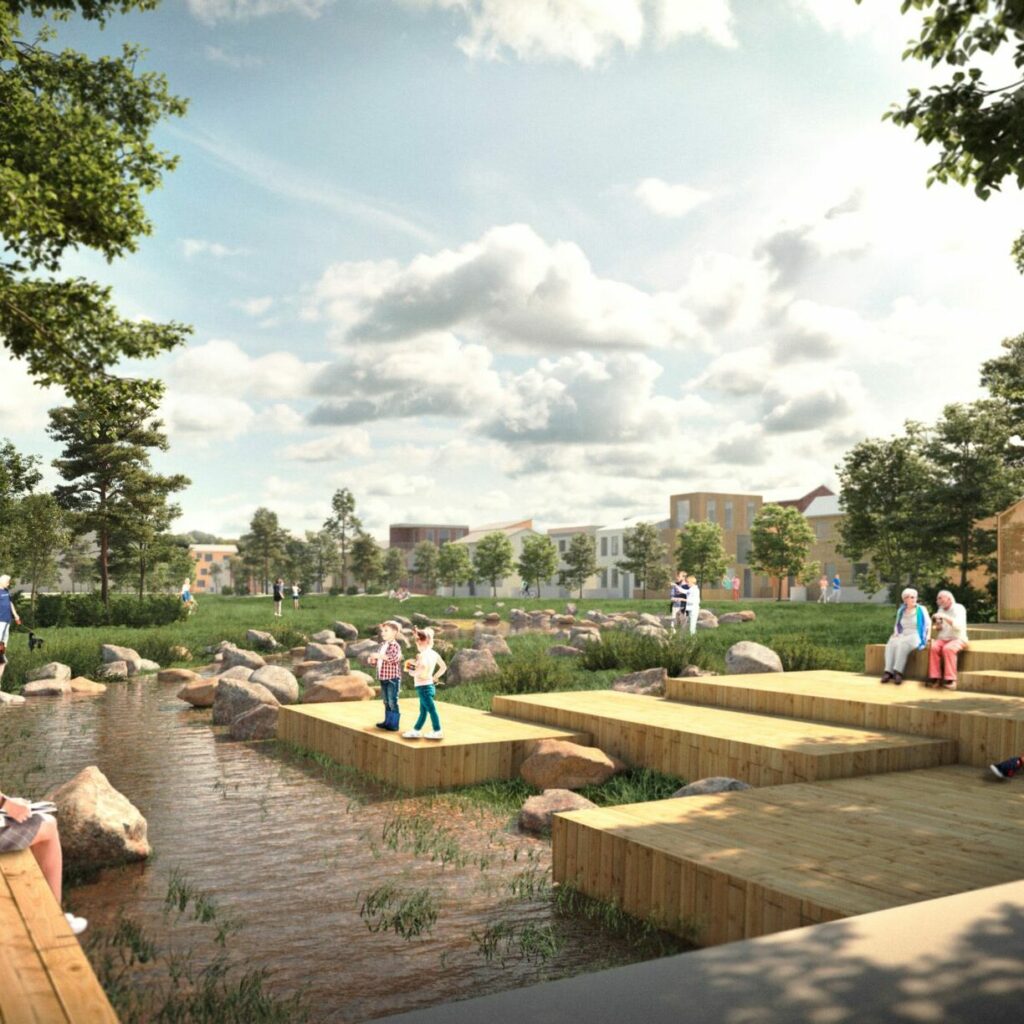 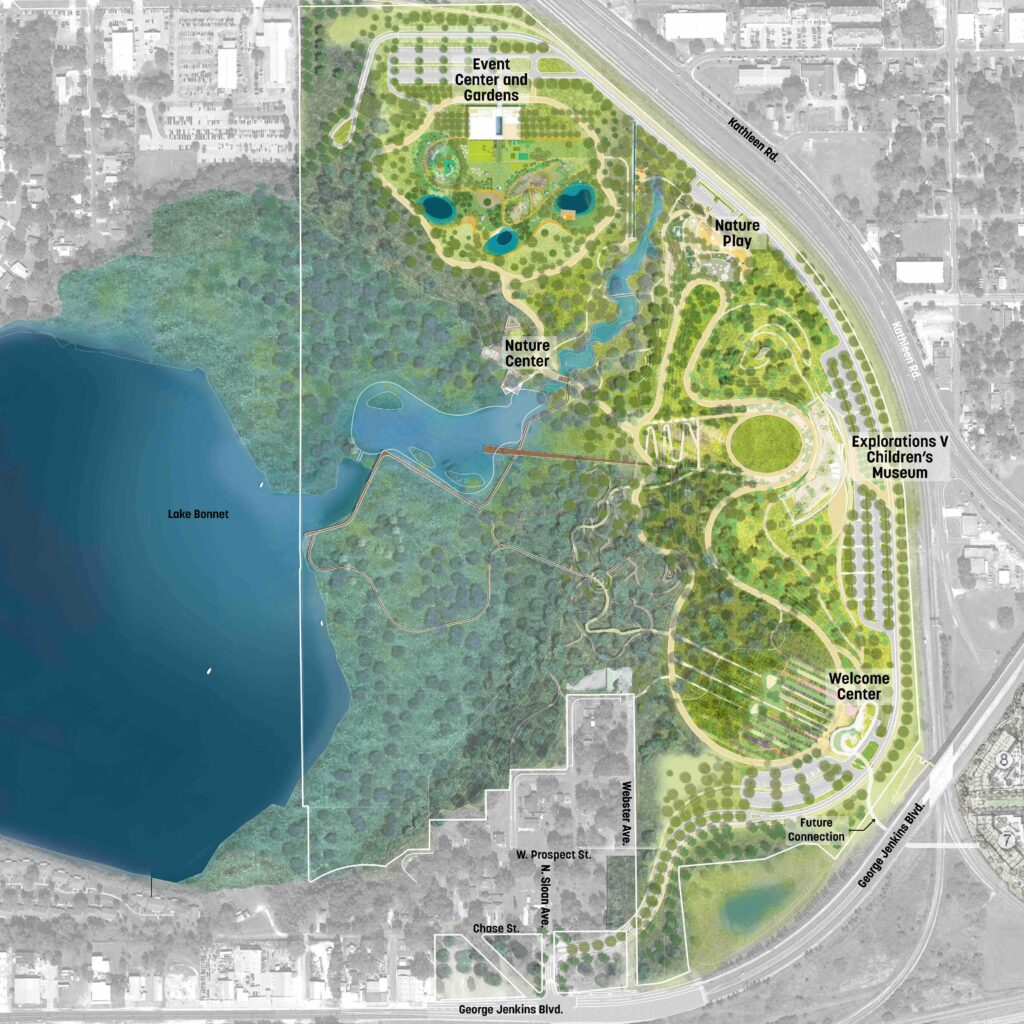 Florida gets its very own ‘Central Park’ 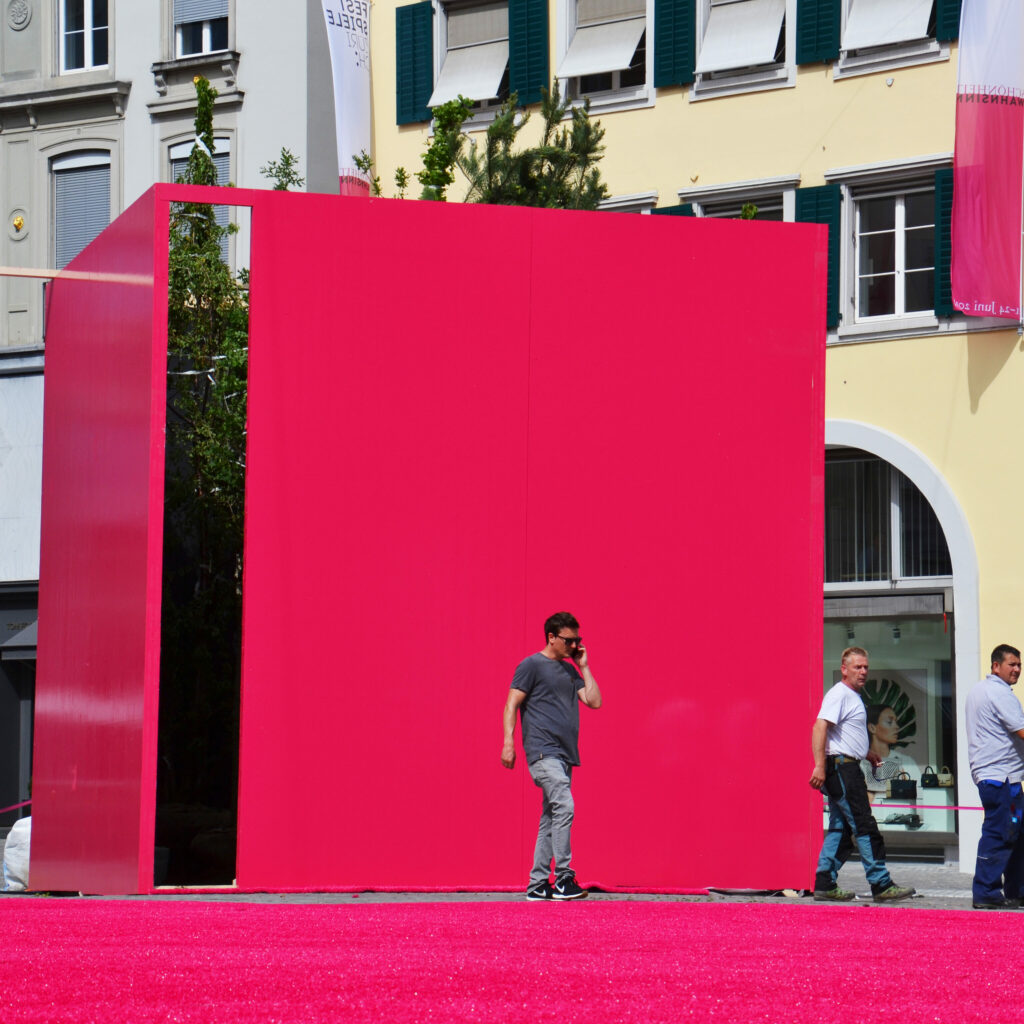 In a Brazilian Grota: What can landscape architecture do to improve the lives of residents and the quality of water?