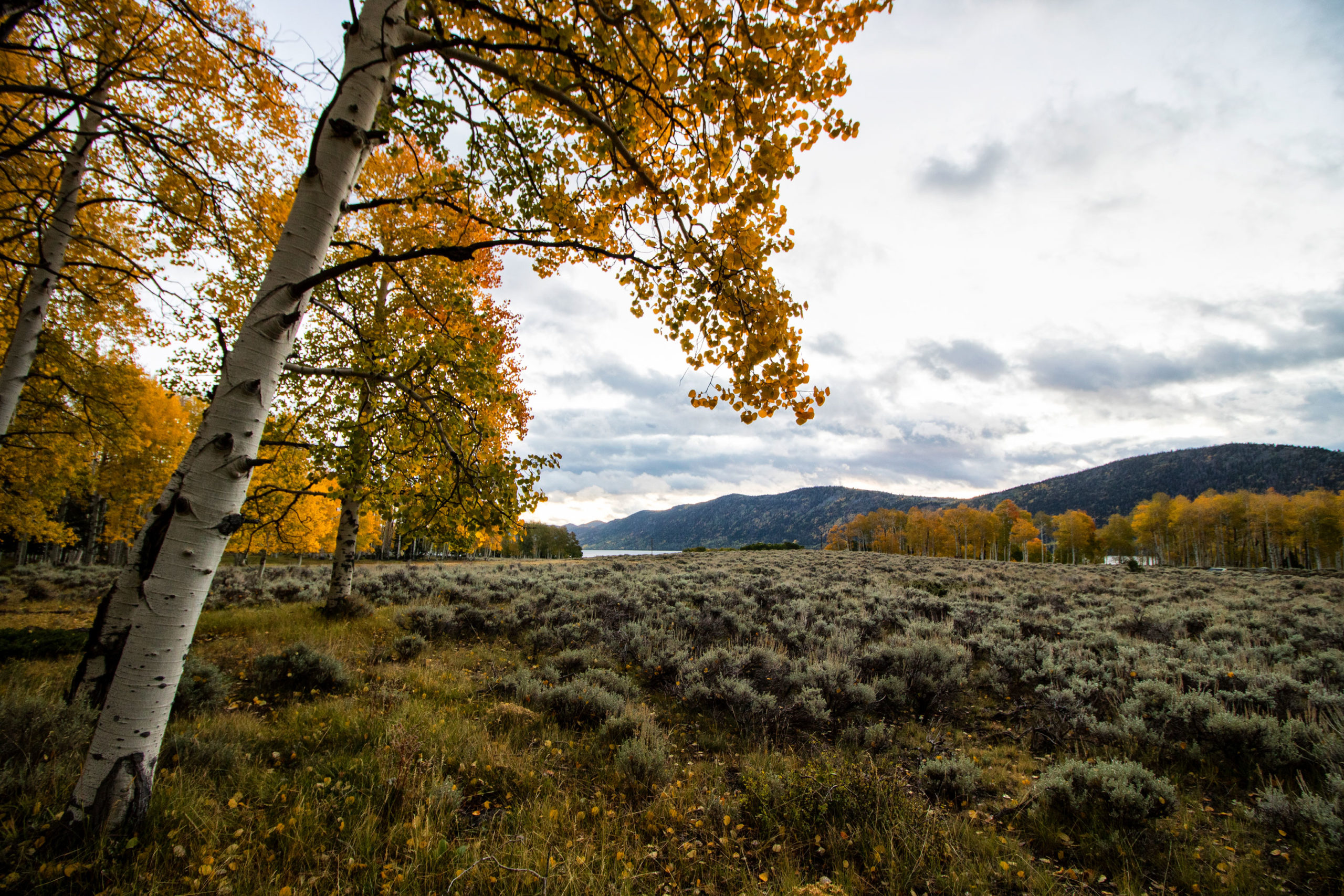 The third part of Paul C. Rogers’ Pando series is about the cumbersome offspring of Pando, the human influence on nature and the possible collapse of this forest-tree.

Pando is a single tree, albeit a tree that is a forest of growing international reputation. Five or six species of aspen (upland Populus) reach around the entire northern hemisphere between about 30°-65° north latitude. They harbor vast amounts of biodiversity. As goes aspen, so goes dependent plants and animals; a cascading effect that may be exacerbated by a warming climate. Can the lessons learned – and answers derived – at Pando shine a light on global-scale aspen conservation?

The third part of Paul C. Rogers’ Pando series is about the cumbersome offspring of Pando, the human influence on nature and the possible collapse of this forest-tree:

New recruits have been missing

I first strode into the Pando grove over a decade ago. With each step I was not only jarred by the immensity of the plant, but also by the scale of the task ahead. Visually, the area is stunning! But even a casual visitor can see that something is awry. This forest seems to be made up of only mature trees, a sprawling portico of stems overtopping gaping voids. Moreover, these senior citizens of the forest community are now more than 100 years old…and age is taking its toll. Mortality in aspen forests is common at that age, but the lack of successful regrowth is not. In fact, new recruits to the clone have been missing for decades. Envision a gallery of trees similar to an urban park, botanical garden, or cemetery. While those places may be beautiful in their own way, they are not predominantly governed by processes of nature.

A team for Pando

To gain a better understanding of what was causing the alleged imbalance at Pando a team of conservationists, foresters, wildlife managers, and livestock professionals developed a plan to fence a small (seven hectare) portion, experimentally alter subsets of this area, and monitor how they responded. As the lead scientist of this effort, it was my job to design the follow-up measurements and interpret the results. The group agreed to place 28 monitoring plots in and around the newly fenced area, taking care to arrange these plots so they sampled all conditions, including the ambient state of Pando outside the protective fencing. Over a three-year period, with significant help from field assistants, we measured the size and condition of old trees, as well as the number and height of new aspen suckers. All regrowth was checked for signs of recent browsing. The team also counted deer and cattle scat to see what ungulates were visiting and how abundant they were. Results of all of this effort indicated that deer and cattle were both contributing to chronic browsing of young aspen, that almost no aspen were progressing in height because of herbivory, and that fencing greatly aided in protecting new growth. We also found that different forms of treatment—burning, removing shrubs, cutting 50 percent of mature trees—made little difference in the regrowth of aspen; all were successful. Even fencing without alterations provided ample regrowth! These aspen suckers were trying to grow all along, they just needed a respite from chronic browsing.

Following initial success a second 15-hectare fence was erected within Pando. Unfortunately, early results from a follow-up study indicate that this newly protected area is not facilitating regeneration. What’s the difference between the two adjacent areas? It appears that use of a 25-year-old fence as a portion of the larger exclosure, as a cost saving measure, may have been a mistake. Sections of this older fence seem to be allowing deer to access the site and prevent new aspen suckers from growing. While fencing may seem a simple solution, it is expensive and requires regular maintenance as falling trees commonly breach even the strongest of materials allowing animals to enter and eat young aspen.

“The real issue is the regulation, by nature or humans, of ungulate population numbers and movement”

We should note that determined ungulates, such as deer or elk in the western US, will often find ways to reach the highly nutritious aspen stems, as appears to be the case at Pando. The problem isn’t really that wild animals browse on aspen. That phenomenon has occurred without degradation for eons. The real issue is the regulation, by nature or humans, of ungulate population numbers and movement. In the absence of significant predators, and with economic incentives to maintain game species at high levels, browsers may remain in certain areas for extended periods where previously they were kept moving by threats of attack. Additionally, laws to protect public safety prohibit hunting activities near roads and cabins, both of which are present at Pando. Thus, a virtual sanctuary exists where deer are safe from the few predators and restricted hunters. Deer appear to learn this very quickly and take advantage of their de facto refuge. The upshot of all of these factors is that there is likely an unsustainable concentration of herbivores based at the Pando clone. As complicated as the explanation is, the solution is equally tangled. 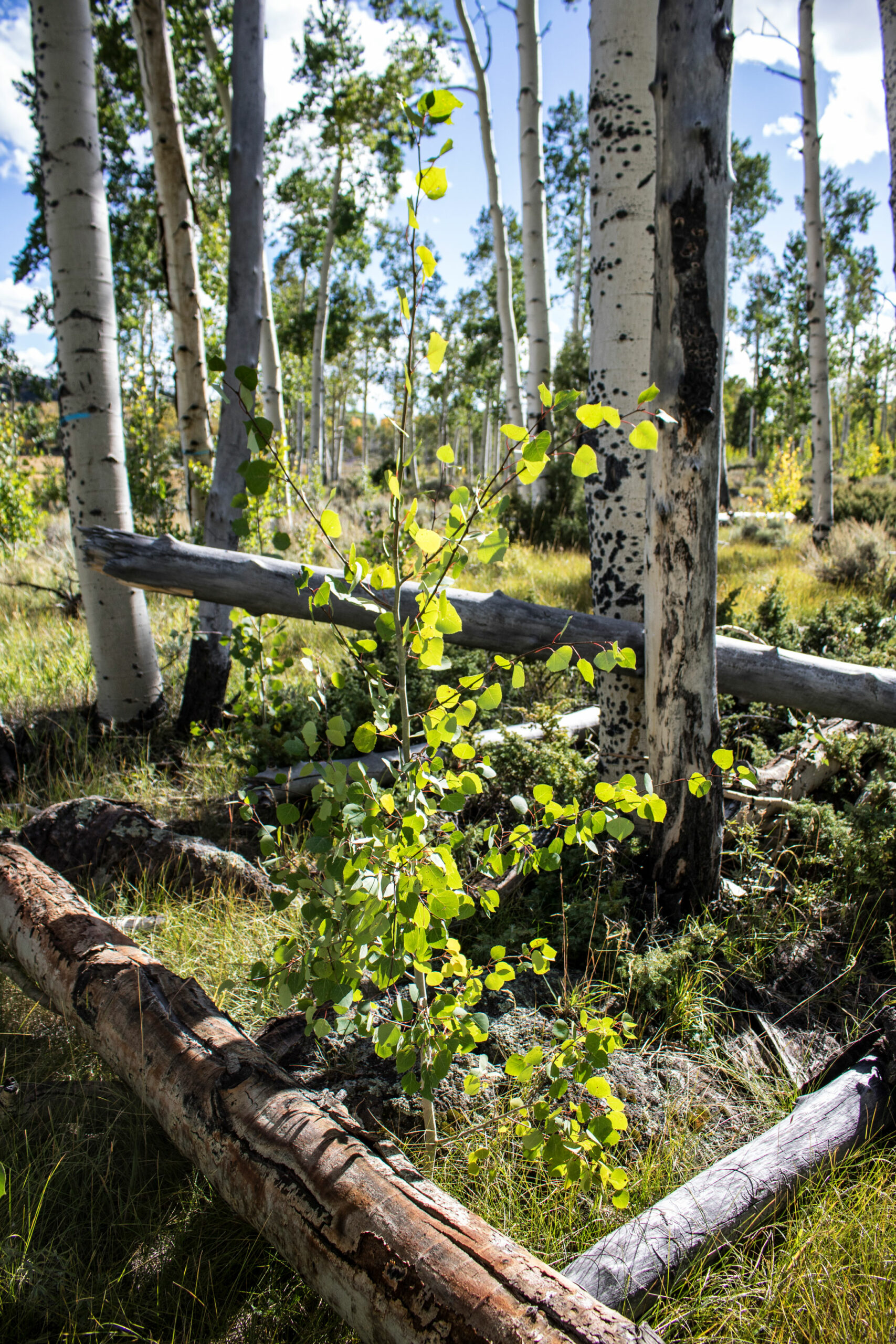 Pando may be collapsing

Over the past 10 years I’ve traversed these 43 hectares known as Pando measuring and musing over what all this data means. Wildlife and plants and people intermingle here at a several levels: ranchers need cattle; hunters need deer; people hike, camp, and build homes; and forests need intact processes or concerted intervention to survive. Current practices for both wildlife and forests favor recreating ecological processes rather than rebuilding historic species compositions. In short, an approach where managers focus on replacing ratios of each species to a conjured past state is not only very challenging, it is likely feudal in the sense that there is no model period to recreate and, even if we could, it may be impossible (and overly manipulative!) to reach that goal. Rather, it is thought, if we can focus on maintaining key processes—disturbance cycles, predator-prey-plant interactions, community rejuvenation—than we can avoid never-ending manipulation of forests such as Pando. Even with that lofty long-term goal, present circumstances refocus our efforts on the immediate crisis at hand. Pando may be collapsing. 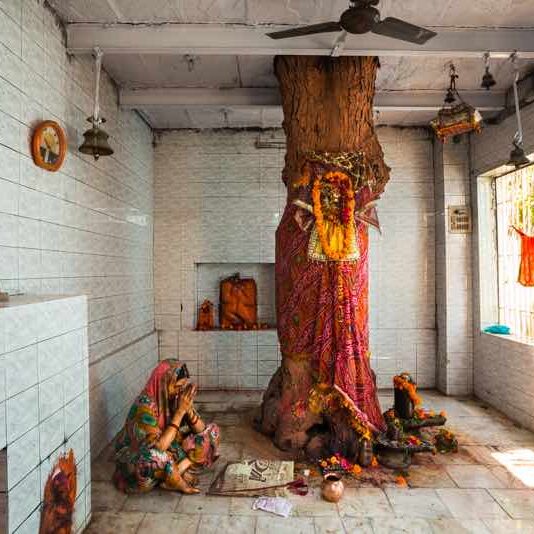 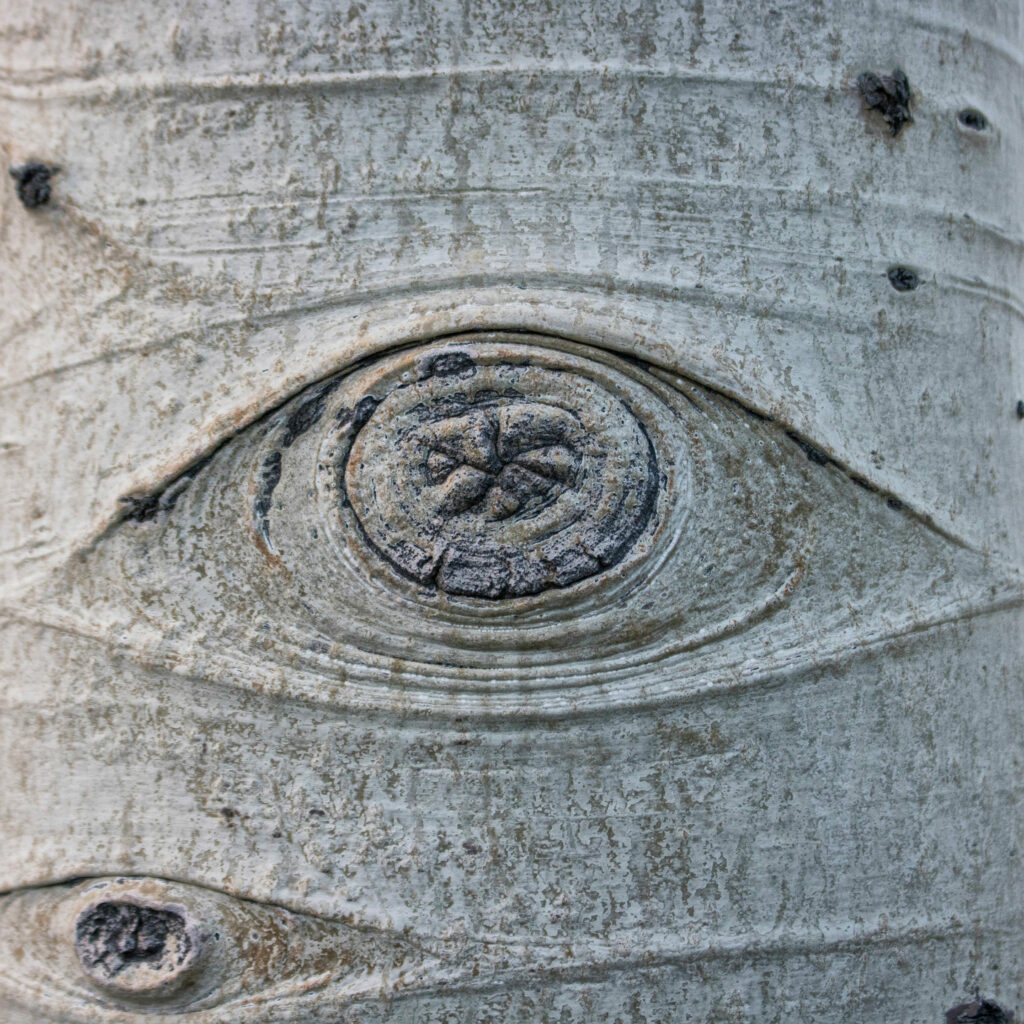 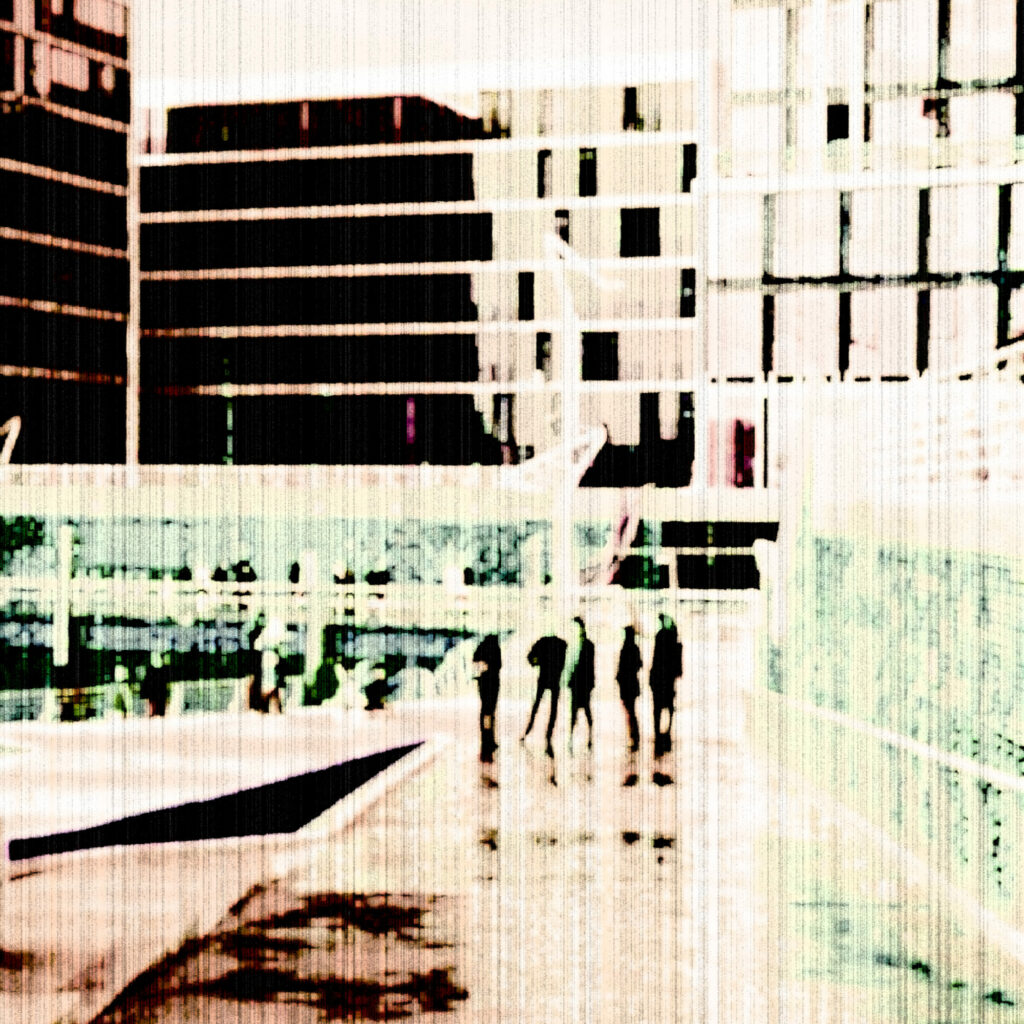