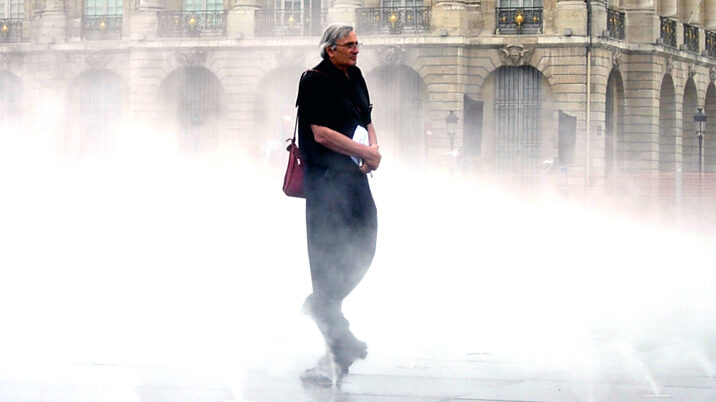 Landscape architecture as a modern discipline is a very young profession and in France we were lucky that till now we could exchange ideas with and interview our seniors who had advanced the theory and practice of the discipline. Michel Corajoud was one of those who invested a major portion of their time to redefine the role of the discipline. On October 29, we have lost one of our most talented teachers and this marks a significant change for all those who received their education through him. The baton has been passed on to the next generation, it is they who are in charge of the discipline, of promoting, preserving and innovating it as Michel Corajoud taught them.

Michel not only had a strong emotional bond to the discipline but also disposed of a natural authority to bring up critical debates on landscape architecture. He was responsible not only for design thinking at ENSP Versailles, but moreover displayed an intense desire to convert thinking into practice that was exemplary. In this inspirational stance on the side of innovation and experimentation he had been very much encouraged by Jacques Simon, his principal teacher during Michel’s first years of work at the Atelier d’urbanisme et d’architecture (AUA). Among Michel’s collaborators at this studio was Paul Chemetov, who at the time specialized in new suburban districts.

From 1971 to 2000 Michel lead the Design Department at the Ecole Nationale Supérieure du Paysage of Versailles, in those decades the only school in France to offer a higher education degree in landscape architecture. He also directed ENSP’s efforts to modernize its educational methodologies, and when he left in 2000 he bequeathed an educational programme which in its basic parameters still determines the direction of the school today.

Michel’s relationship to his students was not just that of a respected master, he invariably encouraged his students to go further, to explore, initiate a debate and question a site’s potential and identity. He showed them that only by applying oneself rigorously it is possible to achieve interesting spatial sequences and give meaning to a place. He had a principled aversion against students imitating his method and instead goaded them on to embark on new research and develop their own approaches. By supporting his students’ ideas, he demonstrated to them that he had trust in their ability to reinvent the future of the profession and explore the role of the landscape architect in an era of rapidly evolving challenges. Such an openness towards the new could obviously not emerge if the students simply emulated Michel’s way of practising landscape architecture.

He knew also how important it was to teach and to have his own studio at the same time, for this would allow him to be engaged in two very different activities that would fertilise each other. Even so, he was quite suspicious of colleagues who taught only what they had learned from their professional practice. Michel was always aware of how complex the learning process is and the iterative phases which are necessary. He was not keen on the linear methods coming from the professional world of doing.

To help the students in their design methods, he wrote to them, in 2000, a “Lettre aux étudiants” (Letter to the students), which has since acquired the status of a foundational document at ESPN and far beyond. In this letter, Michel outlined nine steps of a design process – a structured description of the work of the landscape architect that other professionals in the field have found to be highly useful and which has become a received method worldwide. In the final sentence of his letter to the students, Michel calls upon them to have confidence in their own ideas and defend them against critique based on convention. To achieve this kind of confidence is probably the hardest lesson to learn in design, given the many influences, interactions and parameters a student has to negotiate.

Michel Corajoud never relented in his fight for the promotion of landscape architecture as a profession and as a discipline that makes crucial contributions to both science and art. Even a few weeks before he passed away, he called the French Ministry of the Environment to alert their attention to new ways of thinking landscapes, which he considered crucially important for the future of the city.

Michel’s activism has helped significantly to increase the recognition of the profession’s contribution to urban planning and developing responses to environmental problems. Out of the 21 Grand Prix for urban planning, only three landscape architects have received the prize: Alexandre Chemetoff in 2000, Michel Corajoud in 2003 and Michel Desvigne in 2011. Michel Corajoud was also a member of the commission that created the new position of Landscape Architect State Adviser ( Paysagiste Conseil de l’Etat) for the French State as a measure to supervise the implementation of the Landscape Law of 1993. (Today 130 Consultant Landscape Architects work at the regional and provincial levels to advise and support a wide variety of landscape design processes.)

Michel Corajoud’s professional practice, which he led together with Claire Corajoud, comprises an experienced team of about eight practitioners. The office has worked with some of the most talented architects and designers in searching for new responses to the urban and environmental challenges of today’s society. Among the significant creations of this team is the highly innovative Parc du Sausset in Aulnay-sous-Bois, northwest of Paris, a project developed and executed over a period of 25 years. The masterplan for the Plaine Saint Denis quarter, also in the Paris metropolitan region, and its sunken highway with on the top a linear park stands out as another long-term project that has transformed the social life of the district. At the Cité international of Lyon, a large urban redevelopment project headed by Renzo Piano Building Workshop, Michel had the opportunity to point to the importance of river banks as landscape entities by creating not only a new boulevard but also an intricate network of greeneries that structures the relationship between Piano’s buildings and the river Rhone.

It is characteristic of almost all of Corajoud’s projects that they are expressive of a distinct idea; the Avenue d’Italie in Paris, the Grand Terrace of Saint Germain-en-Laye west of Paris, the suburban park at Villeneuve in Grenoble are notable cases in point. The most well-known of Corajoud’s creations is the redevelopment project along the Garonne river bank in Bordeaux with its famous Water Mirror. An impressive and emotional landscape project, this revitalisation of the city’s waterfront has transformed the citizens’ relationship to their immediate as well as more distant geography. Everyone who worked with Michel Corajoud, whether at his studio or elsewhere, felt called upon to relieve him of his constant anxiety whether he was developing the right design for the right place. He was determined in his vision and yet ready put up his thoughts for critical debate.

Many of us will continue to be deeply admiring of his creativity and intellectual honesty. We have looked up to this couple, Claire and Michel, as our discipline’s “Jean-Paul Sartre and Simone de Beauvoir”.

Karin Helms teaches at ENSP Versailles and was a devoted colleague to Michel Corajoud.

Born in Annecy, July 14th, 1937
1957 Takes his A levels in Valence
1958-59 Art school at Atelier Baudry, Paris
1960 Enrols in evening classes at the Ecole des arts décoratifs, Paris
1962 Works at the Atelier d’urbanisme et d’architecture (AUA)
1964-66 Works with Jacques Simon
1967 Returns to the AUA as partner
1968 Founding partner of the landscape office at AUA: Ciriani–Corajoud–Huidobro
1971-74 Teacher at the Landscape Institute at ENSH
1975-76 Participates, as advisor to the Ministry of Cooperation, in a development project for urban design in Africa
1977-2000 Teacher, lecturer and later professor at ENSP Versailles
1976 Founds professional practice with Claire Corajoud, renamed Atelier Corajoud in 1980
1992 Grand Prix of landscape architecture, French Ministry of the Environment
2003 Grand Prix of urban planning, French Ministry of Culture
2013 Prix International André Le Nôtre for his entire œuvre, awarded by the French Federation of Landscape Architects (FFP)

At the 9th edition of the Barcelona International Biennial of Landscape Architecture Alexandre Chemetoff, Karin Helms and Bernadette Blanchon show their tributes to Michel Corajoud.