The New York City Department of Design and Construction selected Snøhetta to lead the redesign of the new public spaces in Times Square. The reconstruction will be completed in 2015.

In 2010, the New York City Department of Design and Construction and the New York City Department of Transportation selected Snøhetta to lead the redesign of the new public spaces in Times Square. While the site has long been an icon for entertainment, culture and urban life, the physical and operational conditions of the streets, sidewalks and sub‐surface infrastructure such as sewers, have deteriorated over time.

Snøhetta’s commission came on the heels of the NYC Department of Transportation’s (DOT) “Green Light for Midtown” safety and mobility project in 2009, which used temporary paving and street furniture to close Broadway to vehicular traffic between 42nd – 47th streets, which eased congestion at a traffic pinch point and helped make the streets safer for everyone using them.

Times Square as “Crossroads of the World”

The hugely successful pedestrian‐only public spaces moved the DOT to permanently re‐define Times Square with a three‐fold purpose: to upgrade crucial utility infrastructure; provide event infrastructure for new and expanded public events; and make permanent the safety and traffic enhancements introduced as part of the pilot program. Snøhetta’s redesign is inspired by Times Square’s past and its rich entertainment history – a duality that influenced both the larger concept and the project’s details.

The proposal creates an integrated and iconic multi‐functional public space that reflects the best of Times Square and New York City. According to Craig Dykers, Snøhetta’s co‐founder: “Our goal is to improve the quality and atmosphere of this historic site for tourists and locals, pedestrians and bicyclists, while reducing the traffic impediments so the “Crossroads of the World” will retain ist edge while refining its floor.”

Times Square’s signature buildings and spectacular signs create an outdoor room right in the heart of Manhattan. Snohetta’s redesign of Times Squarecreates uncluttered pedestrian zones and a cohesive surface from building front to building front that reinforces the Bowtie’s role as an outdoor stage. This clear and simple ground surface made of pre‐cast concrete pavers creates a strong anchor for the space, allowing the excitement of Times Square’s commercial components to shine more brightly above. The area’s new two‐toned custom pavers are embedded with nickel‐sized steel discs that will capture the neon glow from the signs above and playfully scatter it across the paving surface. 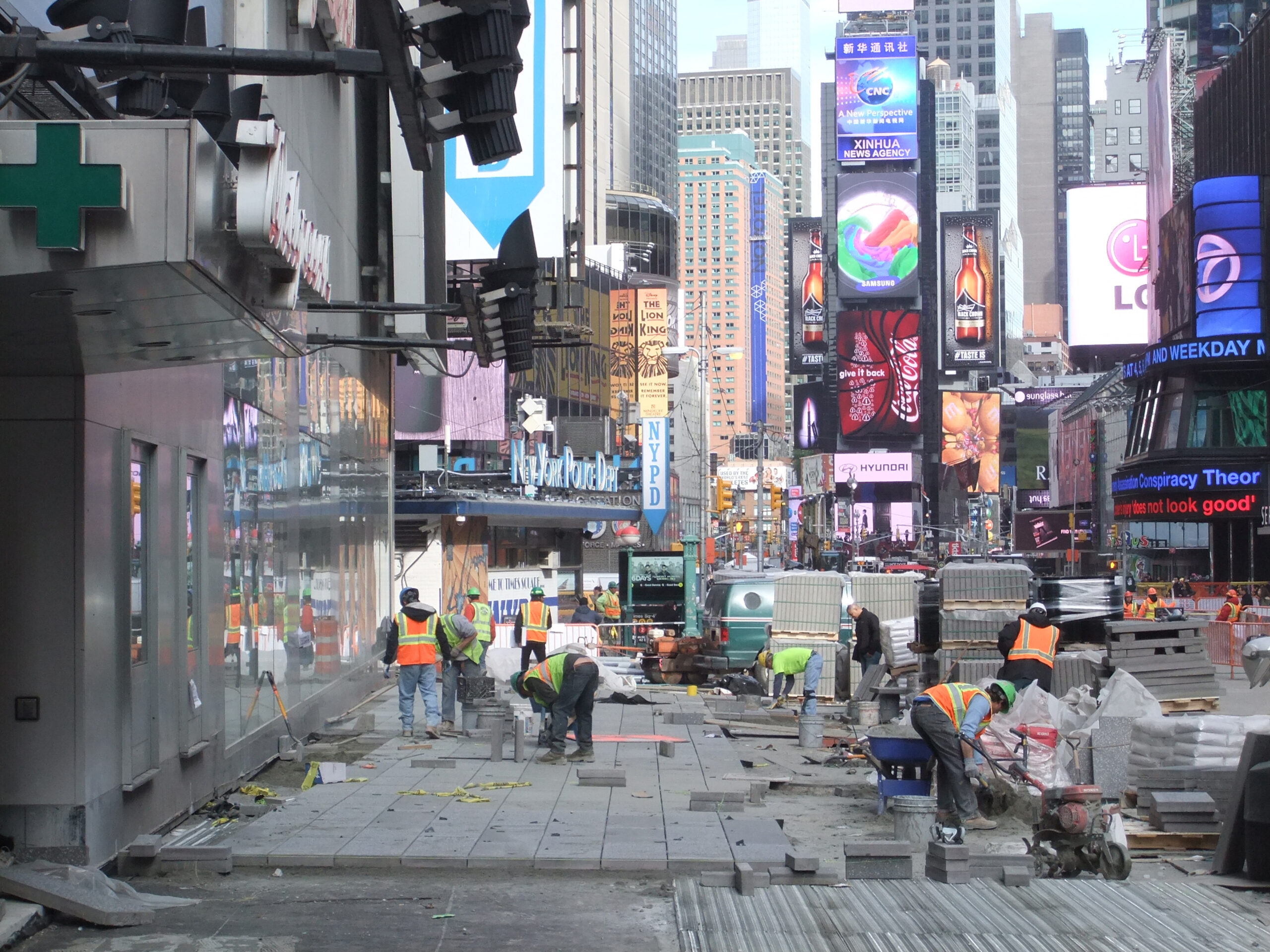 Reconstruction of Times Square to be finished in 2015

In addition to simplifying the ground surface by consolidating both moveable and permanent sidewalk and street elements, Snøhetta’s redesign also addresses practical issues such as drainage and maintenance and programmatic flexibility. Ten granite benches oriented along Broadway will define and frame the area’s public plazas. These benches will act as a magnet for visitors, create an infrastructural spine for events, and provide a clear orientation device for tourists and locals alike.

New power and broadcast infrastructure embedded in the granite benches will reduce the use of diesel generators and enable swift and efficient set‐up and break down of events. The reconstruction will be completed in 2015.

Habima Square in Tel Aviv has become a popular meeting point. Specifically the sunken garden has its appeal. A visit to the square, designed by Israeli artist Dani Karavan and completed in 2010.