Paris-based Agence Ter and Team won the visionary competition for the renewal of Los Angeles oldest park, the Pershing Square in Downtown.

The used plants in the design are mostly local plants and adapted to the dry climate and droughts.

Los Angeles City Councilmember José Huizar revealed the winner of the international design competition to reimagine the five-acre park at the heart of Downtown Los Angeles: Agence Ter and Team. The proposal drew the highest scores from the 1,355 members of the public who weighed in on the four finalists and was the unanimous first choice of the Pershing Square Renew jury.

“With 80 design firms from around the globe responding to our call to re-imagine Pershing Square, including our four exceptional finalists, Agence Ter and Team won the hearts and minds of the public and our jury with their brilliant yet accessible and thoughtful design,” said Los Angeles City Councilmember José Huizar, who has championed the effort to revitalize the historic park. “From the very launch of Pershing Square Renew, our goal was to create an open, warm and inviting design that was focused on serving people and not form – one that would allow Pershing Square, the City’s oldest park, to reclaim its place as the heart of Downtown Los Angeles. Today, we are one important step closer to making that happen.”

One of the most notable features of the winning proposal was what Agence Ter’s founder and director described as “radical flatness.” While the current-day park sits elevated atop a parking garage, with stairs and ramps linking it to the street around parking garage entrances, the new design lowers the top level of the garage to street level, creating views and paths from Fifth Street to Sixth Street and from Olive to Hill. A reflecting pool on the west side of the park mirrors the stately Biltmore Hotel, and an iconic “smart canopy” designed by artist Leo Villareal lights up at night and provides shade during this day. Other features include water cycling and alternative energy systems; a welcoming balance between light and shade; programmable, flexible space; and landscaping that creates a welcoming ecology with gardens, grasses and lawns.

Agence Ter and Team further explain their design in this video:

“It’s been an exciting process for the Department leading to this pivotal moment in the revitalization of Pershing Square,” said Michael A. Shull, General Manager, Department of Recreation and Parks. “The winning design is nothing short of remarkable and we’d like to congratulate the Agence Ter team for winning the public vote with a design proposal that will reimagine our City’s historic five-acre urban park located in the heart of downtown Los Angeles.

We are extremely excited and ready to contribute to the rebirth of Downtown Los Angeles through the renewing of Pershing Square,” said Henri Bava, founder and director of Agence Ter. “By radically flattening the lifted surface, it will reach out to the neighborhood again, establishing a real dialogue with the city. It will become a green, sustainable and active destination for the metropolis and will be timeless and elegant through its welcoming simplicity.

The top designers in the world brought four extraordinary visions to Los Angeles, and one stood out above all,” said Eduardo Santana, Executive Director of Pershing Square Renew. “Agence Ter and their team captivated the jury and the public with its elegant simplicity, with its connection to the surrounding streets and the city beyond them, and with the canvas it provides for programming, activity, and for the community’s own dreams and desires.” 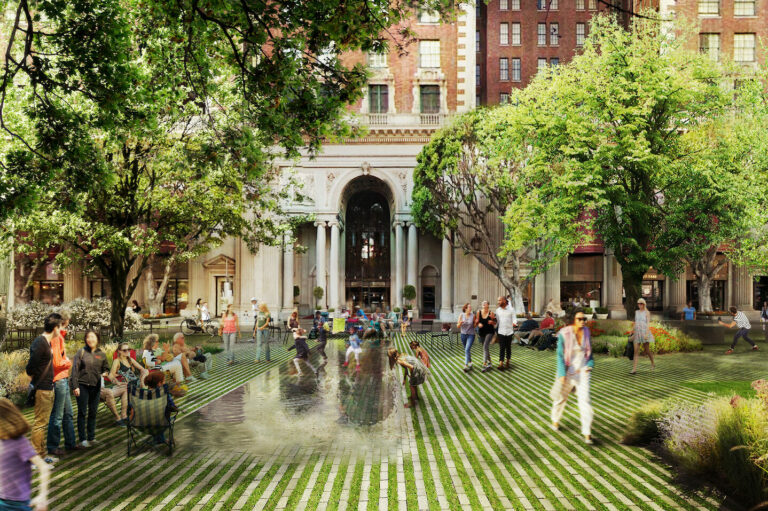 There will be many different areas to discover, such as this water mirror. 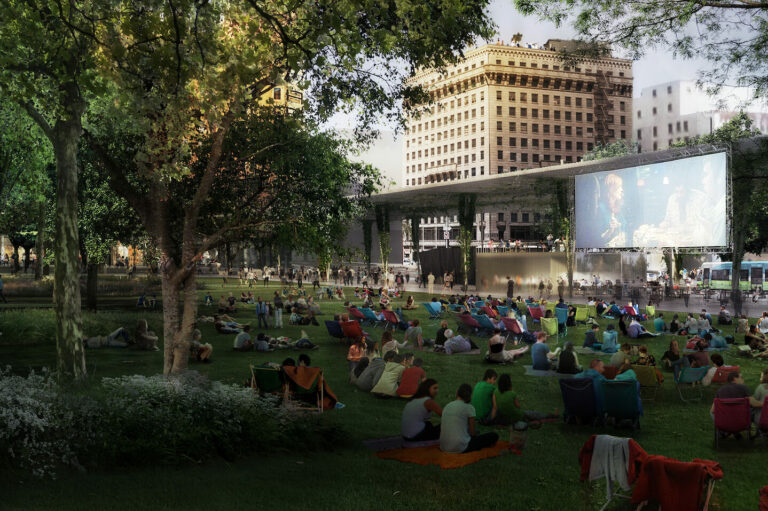 They envisioned a multifunctional space in Downtown Los Angeles. 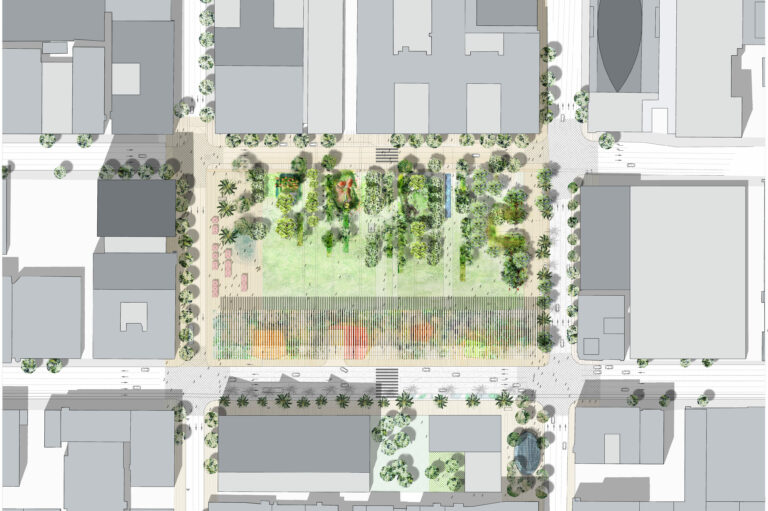 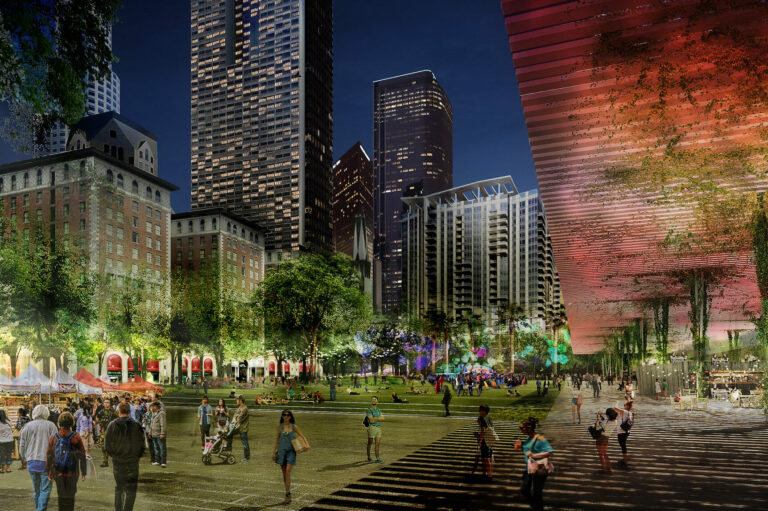 Agence Ter won the competition for the new Pershing Square in Los Angeles. 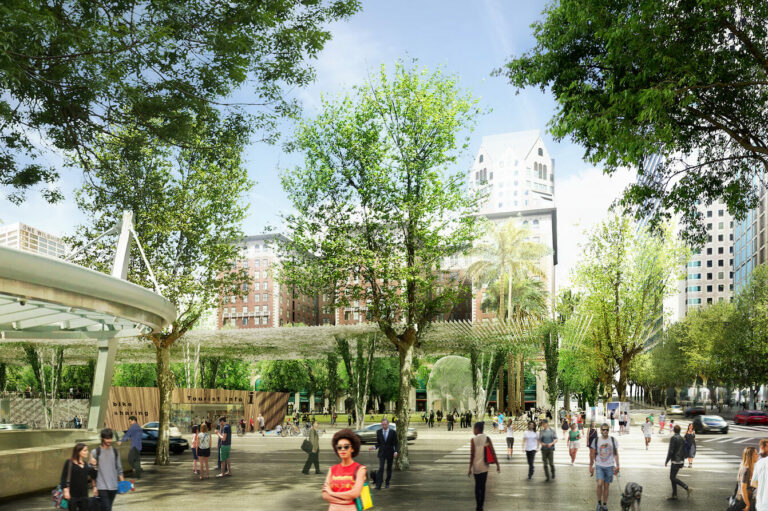 The used plants in the design are mostly local plants and adapted to the dry climate and droughts.

Located in the heart of Downtown L.A., Pershing Square is the City of Los Angeles’ oldest park, dedicated in 1866 by Mayor Cristobal Aguilar as “La Plaza Abaja” (“the Lower Plaza”). Pershing Square has been redesigned and renamed multiple times since its inception, including design overhauls in the 1950s and early 1990s. The square covers an entire city block adjacent to LA’s Historic Core, Jewelry District, Bunker Hill and Civic Center, as well as a major transit station.

In September 2015, the Los Angeles City Council adopted Huizar’s legislation to create a public-private partnership and work with Pershing Square Renew, a non-profit partner, which came out of a task force created by Huizar in 2013. Once the international design competition was announced, Pershing Square Renew received 80 letters of interests from design firms throughout the world and more than 50 submittals of qualifications. From that pool, 10 semifinalists were selected in October, four finalists in December, and one winner today.

Other Los Angeles leaders whose work has been critical to the effort include global design firm Gensler, which has been deeply engaged in the creation, facilitation, and branding in support of the non-profit and international design competition; and Loeb and Loeb, whose principal Allan Abshez provided critical pro bono legal support to the effort as it established itself as an independent public-private partnership and set ambitious goals for the transformation of the city block.

The other three finalists present their designs in the following videos. 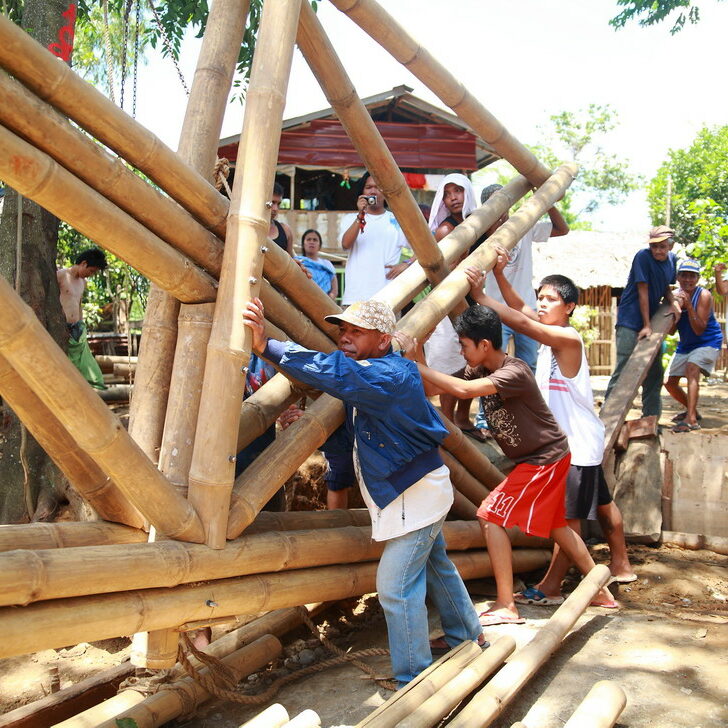 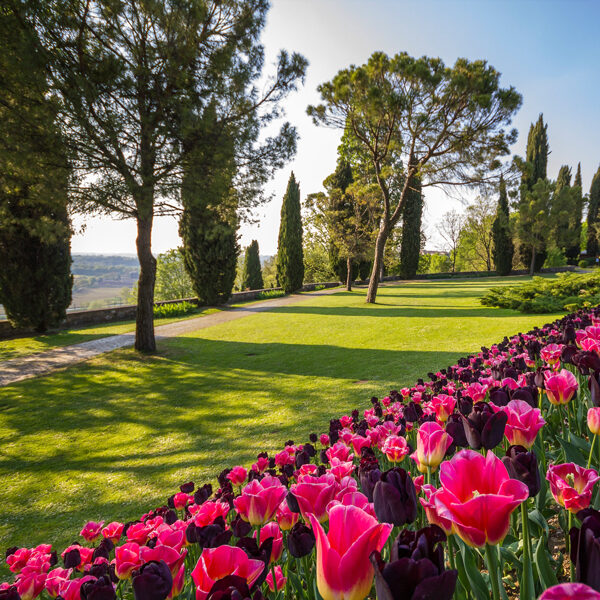 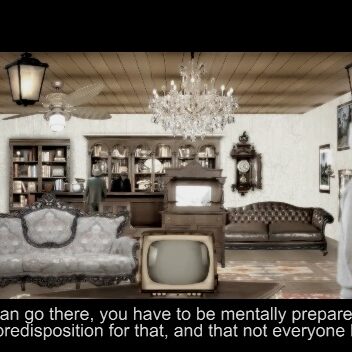 Ideas for a better future

The Buckminster Fuller Challenge 2016 searches for innovative ideas for a sustainable future.