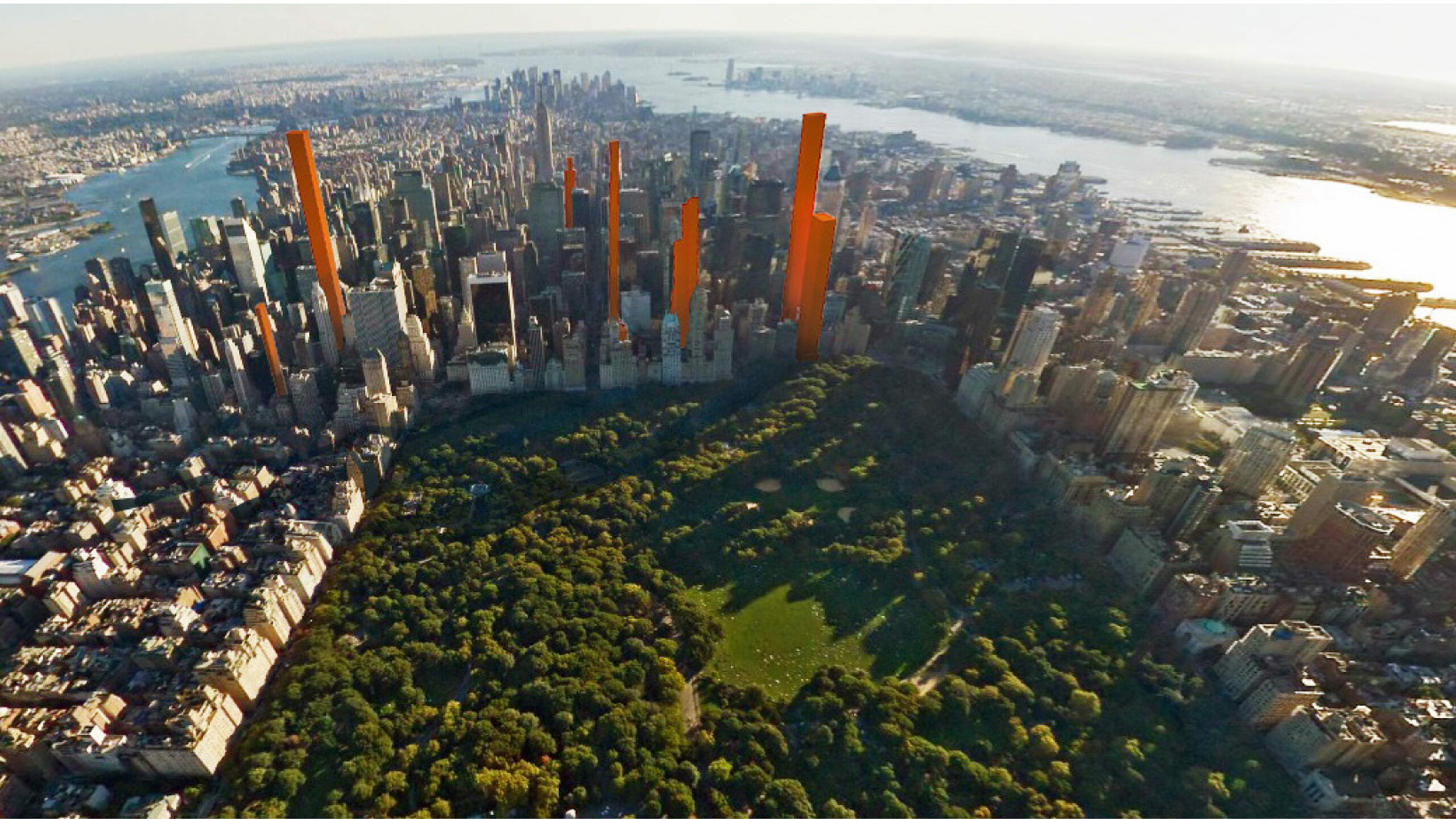 New York City Parks are struggling with a serious problem: The soaring buildings in Midtown cast a long shadow over Central Park, for example.

The city of New York is now dealing with a serious problem concerning the rising buildings of midtown casting a long shadow over Central Park. Photo: Municipal Arts Society of New York City

Standardized grids, and dense building development give cities their character and in some sense, definition. These factors are nothing new, but the heights of buildings in city centers have continued to escalate. While this may be an awe-inspiring view for people to look up at while on the street, and provide incredible views for those at the top, there are some unintended and mostly overlooked side effects of this type of development. The city of New York is now dealing with a serious problem concerning the rising buildings of midtown casting a long shadow over Central Park. City agencies, architects, and urban planners now asking, how they can set values for the surrounding outdoor spaces when planning a tall building near New York City Parks. More importantly, can buildings continue to rise without negatively impacting the surrounding landscapes?

In the 19th century, the term skyscraper was coined for buildings ten stories or higher. While taller and more massive than any vegetation found in urban areas, their presence did not loom over the surrounding landscape as a beacon seen from far and wide. The shadows and cavernous effect of these buildings was not encompassing from any considerable distance. Still in this era, the city of New York planned, commissioned a design for, and built Central Park, arguably the most famous park in the world.

The plan for Central Park punched out a single mass in the center of Manhattan, creating an escape to the wilderness. The walkways weaved through the rock outcrops and ponds, while the large trees throughout the pastoral landscape blocked the view of the surrounding city. By the middle of the 20th century the focus of development on Downtown opposed to Midtown Manhattan began to shift. The park began to change from its pastoral escape from the urban fabric; it lost its geographic anonymity as a result of the surrounding skyscrapers peering eyes that began to surround it.

The majestic views and desired proximity to the world’s most famous park has promoted a lot of development since its construction. Rising business activity in Midtown has resulted in the increased development of tall buildings along the southern edge of the park at 59th Street. The giant structures of the 21st century city have now started permanently shading the most popular part of Central Park. Although the park stretches an astounding 50 blocks in the north-south direction, the proximity to the urban center at its southern edge has made that area the most popular. The 50-story and higher structures that line the park at the southern edge now create a permanent shadow over the lower 6 – soon to be 8 – blocks of the park on average. This means that over 300 feet of the park, the largest of the New York City Parks, is covered in shadows for the majority of the year.

The change has been somewhat slow over the decades, but when analyzing the result, it is very apparent. All one needs to do is visit Prospect Park in Brooklyn, thirty minutes on the subway from Central Park, to see a suitable control example. New York City is lucky to have two parks of such a high caliber, designed by the same duo (Olmsted and Vaux), with similar size, style, and even features such as the great lawns, athletic fields and views to the follies in the distance. The difference is that the neighborhoods bordering Prospect Park still have a similar fabric and average building height as they did when the space was planned. In fact, many of the buildings are still the original structures. When resting in the long meadow of Prospect Park, the illusory feel of exiting the city still takes effect, something that may be lost to Central Park. 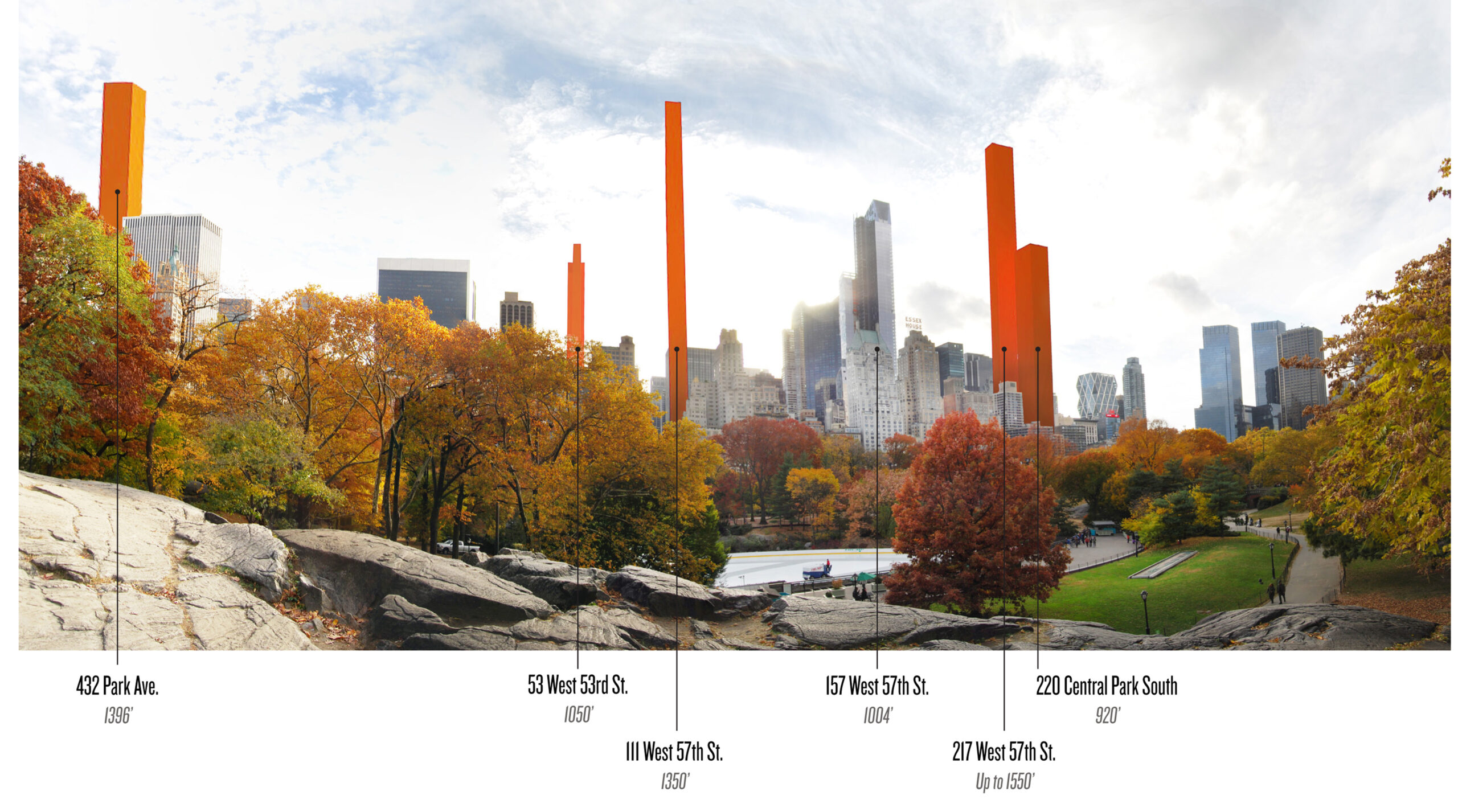 Plans for new skyscrapers have not yet been released. Renderings show the building’s reported height and extrapolates its massing based on the lot size and zoning. Image: Municipal Arts Society of New York City

Although this dichotomy helps to point out the change in the aesthetic and potential enjoyment of Central Park, it does not solve the problem. Agencies throughout NYC have begun to fight back performing private studies compiling the numerous projects that are being developed and proposed near the southern edge of central park. Their effort has begun to raise awareness that this issue is an important one for the world’s most famous park and should be looked at as a singular problem as opposed to con-sidering the impact of each project individually. Making a solid argument for preventing this development requires clear reasoning and a quantitative, objective evaluation of the role direct sunlight plays on outdoor space.

Through the City Environmental Quality Review (CEQR) Process in NYC, shadow is a key element to be analyzed with its own section. Unfortunately, the current code and review process holds very little threat to projects as there are no clear quantifications. This also divides the impact on Central Park between the numerous projects that affect it, creating a “Tragedy of the Commons” situation. In order to properly address the issue, the city must view this as a combined impact, from a planning perspective. Just as our environmental analysis should more clearly reflect our impact on the natural landscape, we must also take care to analyze how the new blossoming city of super structures impacts our most cherished pieces of New York’s historic development and parks. Outdoor space is the glimmer of hope in the dense urbanity, and it is the sliver of sanity among the entropy of steel, glass and concrete. Closing ourselves in as we build higher and higher will only leave a city that feels more like a prison and less like a creative paradise.

Speaking of green in the city: Can GREEN in architecture improve the climate in cities, reduce heat build-up, reduce fine dust formation and increase people’s well-being? The exhibition “Greening the City” of the German Architecture Museum in Frankfurt (DAM) is dedicated to the advantages and challenges of urban greenery – especially greening houses and roofs in existing and new buildings. Read more. 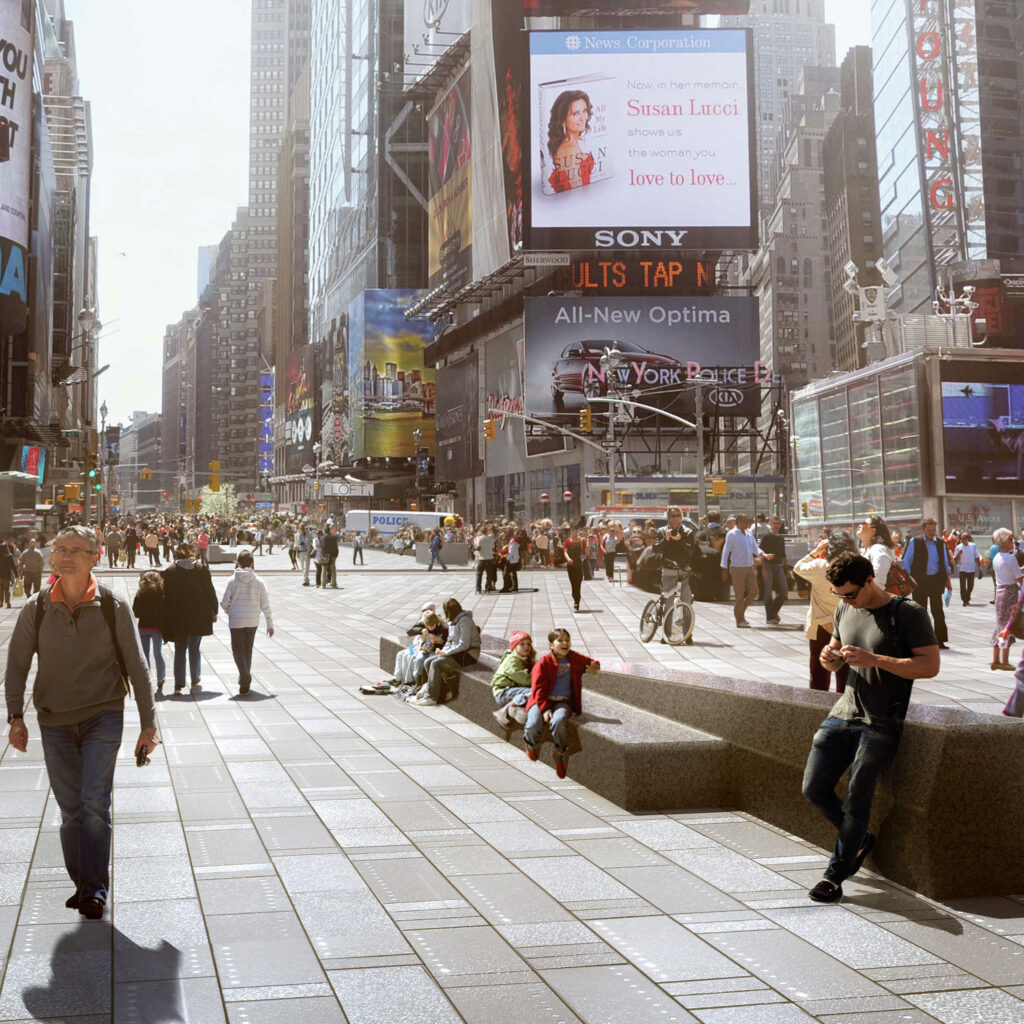 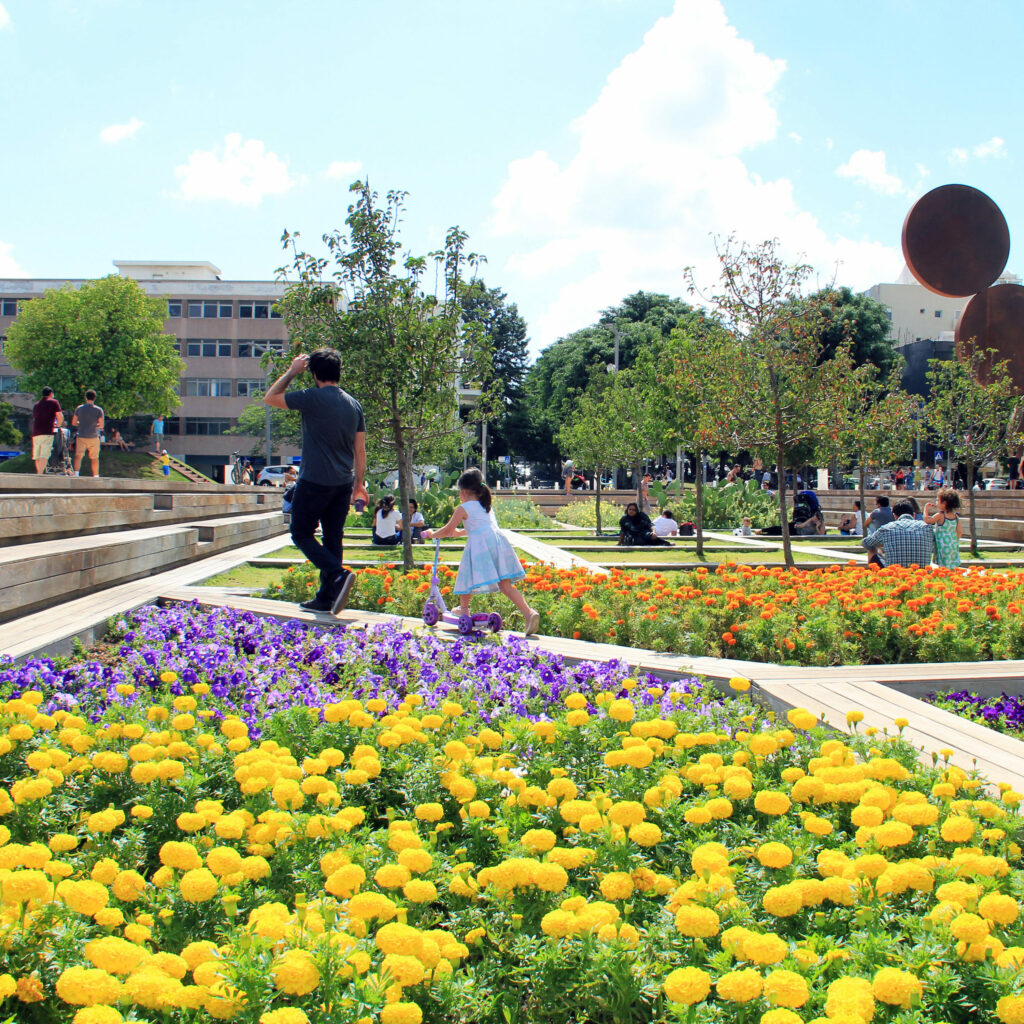 The newly landscaped Southern part of the Queen Elizabeth Olympic Park opened on 5 April 2014 to the public with new parklands, fountains and waterways, sporting venues, arts and events and children’s play areas.