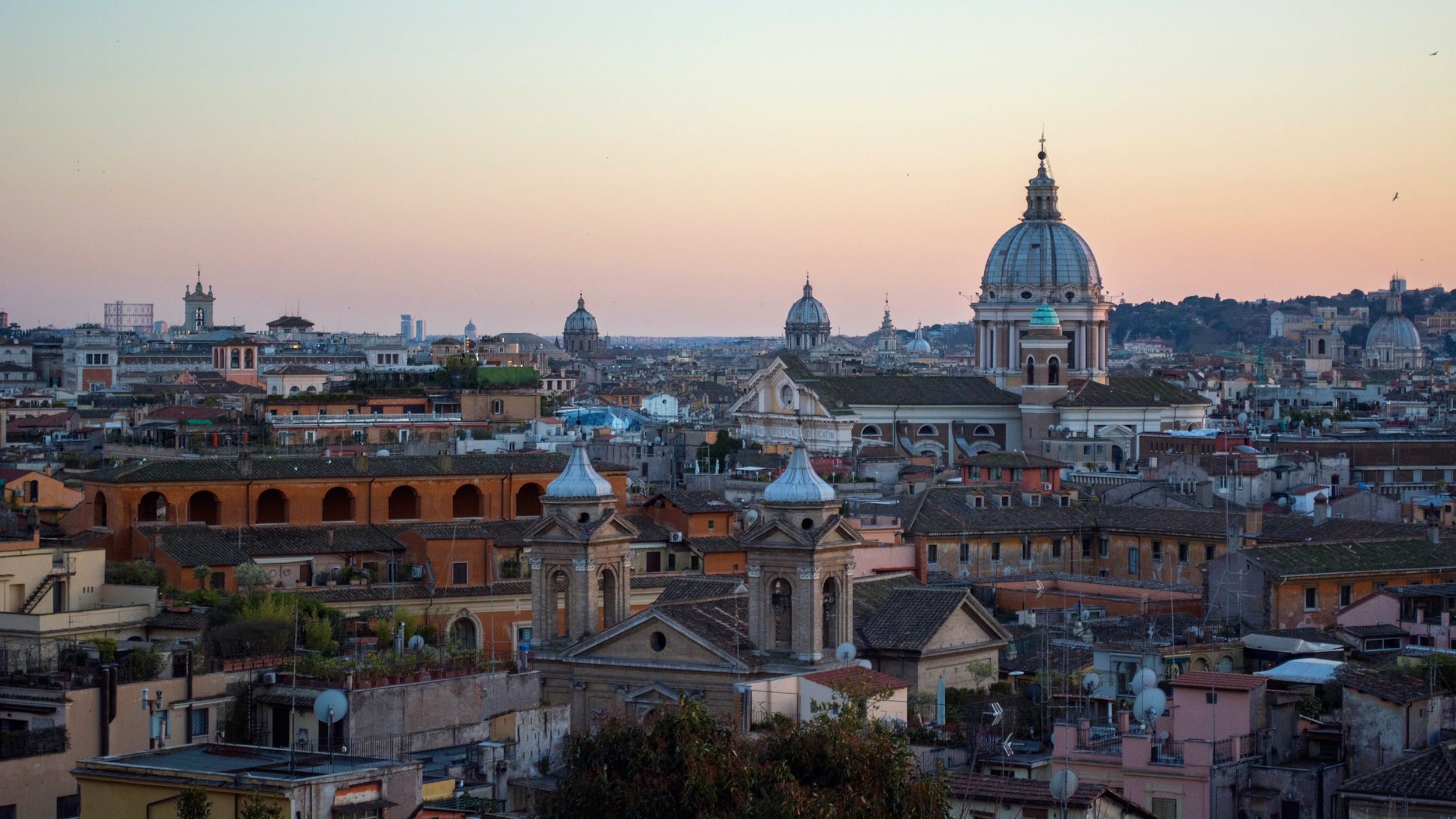 Read here which architectural and urban planning icons every Rome visitor should have seen and which new urban planning projects are currently in the making.

Rome is, without a doubt, one of the cities most famous for its architecture. (c) Julia Solonina on Unsplash

Rome is, without a doubt, one of the cities most famous for its architecture. The ancient city has strongly influenced the modern world in many aspects, including religious, legal, and architectural systems.

Allegedly founded by Romulus and Remus, early Rome was dominated by Etruscans and other kings. From 509 BC, the Roman Republic was in place and the Roman territory vastly expanded. During the Punic Wars, the city displaced Carthage as the dominant regional power and, with the rise of Julius Caesar, morphed into the well-known Roman Empire. During medieval times, the formation of the Papacy characterised the city. From the 15th century, Rome replaced Florence as Italy’s centre of artistic and cultural influence. After a brief period as part of Napoleon’s First French Empire and after heavy bombing by Allied forces during the Second World War, the city became Italy’s capital in 1946. Nowadays, Rome has about 4.4 million inhabitants, making it a global city and one of the largest urban areas of the European Union.

Visitors to Rome should start their tour with the highlights of ancient architecture. Countless innovations in construction and engineering have come from Rome and have, until today, a lasting impact on the modern world. Roman aqueducts are a good example of this. For almost 2,500 years, they have transported water to urban areas, thus improving public health and sanitation and ultimately enabling the rise of cities. The building materials used for the Colosseum, or the Roman Forum are still partly original. This is because Roman cement and concrete are innovative mixes that can support arches and buildings even after many centuries.

Another important Roman innovation are Roman roads, which were the most advanced roads in the ancient world. They allowed the Roman Empire to stay connected. Several of the 50,000 miles of road built by 200 B.C. are still in use today. And innovations such as mile markers or drainage alongside and under roads also come from Rome. 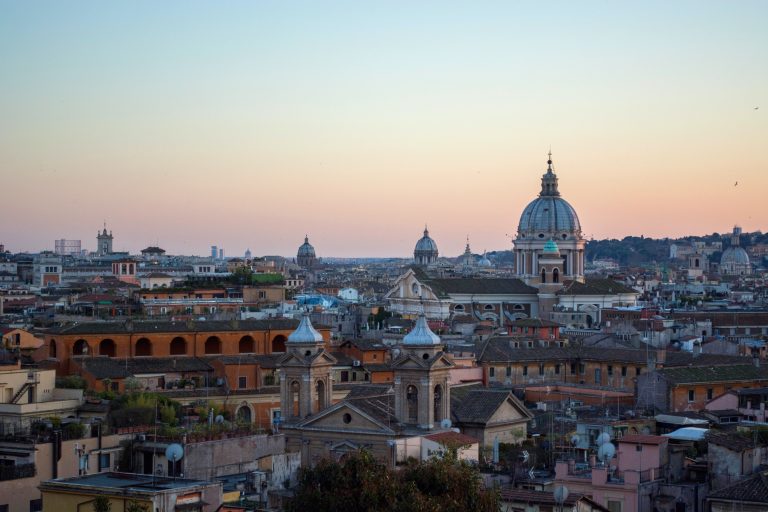 Rome is, without a doubt, one of the cities most famous for its architecture. (c) Julia Solonina on Unsplash 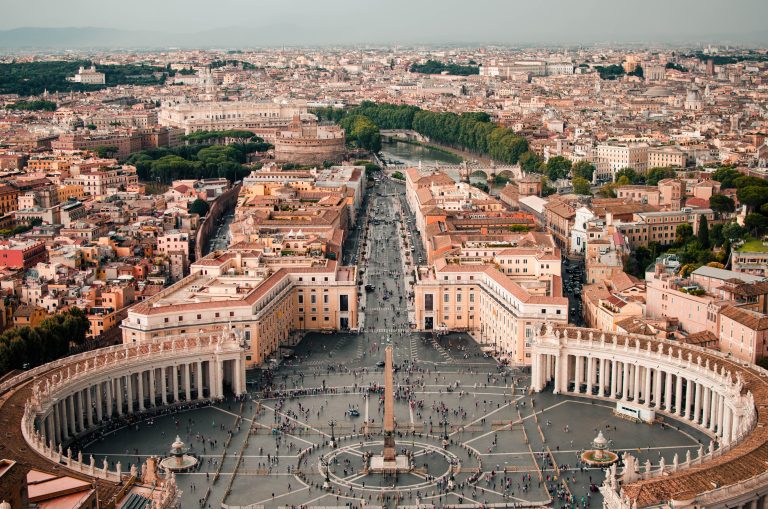 Roman architecture flourished during the Roman Republic and the Empire, when most of the city’s ancient buildings were constructed. (c) Caleb Miller on unsplash 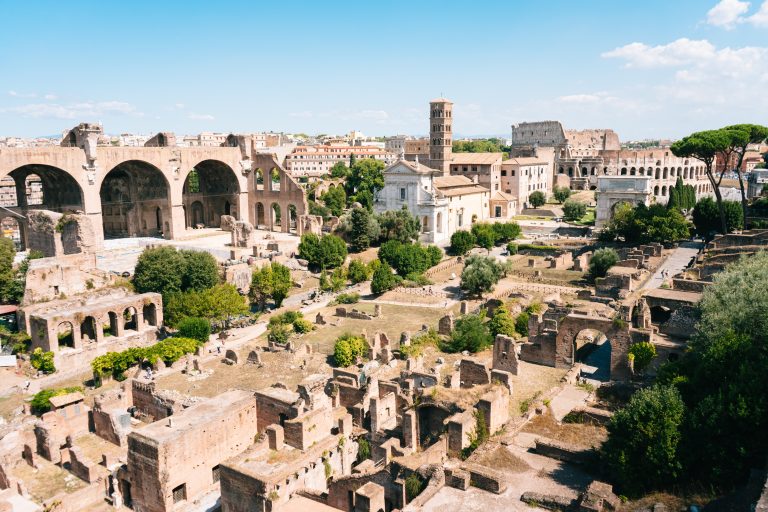 Forum Romanum: Allegedly founded by Romulus and Remus, early Rome was dominated by Etruscans and other kings. (c) Fabio Fistarol on unsplash

One man, Marcus Vitruvius Pollio, was the key Roman architect. Under Julius Caesar, he built many structures and travelled extensively around the Mediterranean to study different styles from a theoretical perspective. Until today, many of these original buildings (or their ruins) can be seen.

A tour of Rome’s older architecture should include the following highlights:

Examples for modern architecture in Rome abound. The MAXXI Museum of Art from 21st Century, designed by Zaha Hadid, is a good starting point. This museum opened in 2010. It consists of moulded concrete and glass and showcases the contemporary work of Italian and international artists.

The Parco della Musica is one of Europe’s most visited music venues. It was built by famous Italian architect Renzo Piano. It resembles an amphitheatre with three building “blobs” that resemble beetles or computer mice.

Richard Meier designed Rome’s Jubilee Church, a cathedral that resembles a ship’s sails with its three curved walls. It also “discreetly refer to Trinity”, according to the architect. Simple elements make up the buildings. Its large glass surfaces guarantee a flow of natural light. The white building material is designed to be associated with a vision of purity. 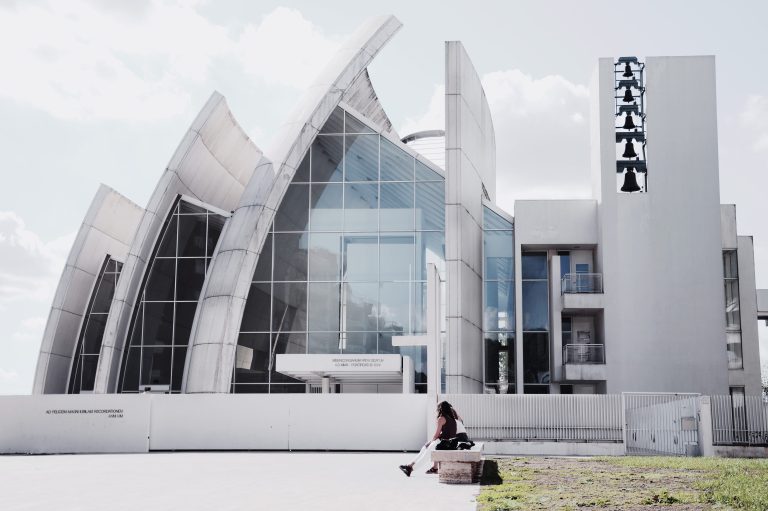 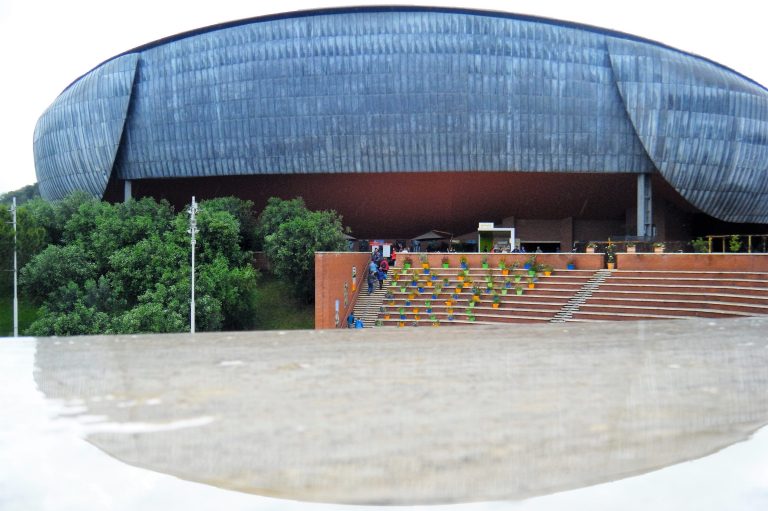 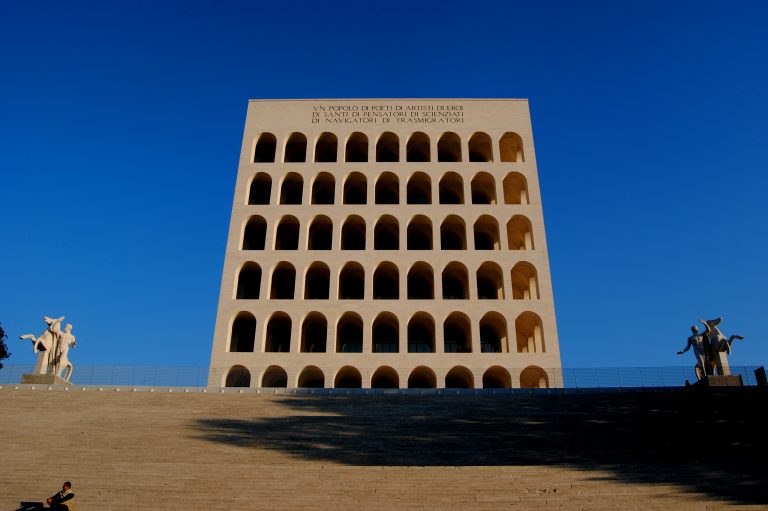 The EUR New Convention Centre is another interesting example for modern Roman architecture. Designed by Studio Fuksas, this structure is supposed Italy’s international image. The complex consists of sweeping curves of concrete, glass, and steel. In its centre, there is an independent cocoon-like structure called “the cloud”.

Another highlight of contemporary Rome is the Italian Civilisation Palace, often jokingly referred to as “the Square Colosseum”. It is in the residential and business district EUR, home to the 1942 World Fair planned by Mussolini but never implemented. Today, this area is the financial district of Rome, and the Palace belongs to luxury fashion brand Fendi.

Rome is known as the eternal city, and part of this reputation comes from its ability to innovate and adapt without losing its identity. Today, the Italian capital is known for its liveability. It is also taking steps to become a smart city.

About 100 urban regeneration projects are delivered now, all of them aiming to make Rome more sustainable, more attractive to tourists and residents, as well as more open.

Rome’s public transport used to have a reputation as one of the worst in Europe. However, since the mid-1990s, this has slowly changed. The extensive rail infrastructure modernisation programme of the turn of the century involved the extension of two existing metro lines, the creation of a third line and the rehabilitation of underused regional rail links.

After almost a century of mostly unchecked urban development, this new, integrated mobility strategy formed the basis for a renewal not just in transport, but also in overall urban policy. Integrated development is particularly important here and Rome’s current masterplan included many lessons from European neighbours.

Part of the city’s transport planning is densification. Sprawl is a big challenge in Rome, as are powerful property owners and their interests. In addition, green spaces in Rome are preserved by default and often cannot be modified, which can sometimes compromise truly integrated transport and urban development.

Rome as a Smart City

Rome’s Smart City Plan envisages the use of new digital technology and a smart city tailored to the needs of its citizens. Dozens of projects are already underway, focusing on security, economic development, cultural participation, urban transformation, tourism, education and schools, social aspects, energy, and environment and mobility.

The City’s Smart City Laboratory, comprised of all stakeholders in the co-design of Rome’s future, has invested in the Rome Data Platform and in Star, a platform for signalling and tracking anomalies on the roads of the city. This also includes a new pavement management system method, a new system to control street lighting through sensors, and interactive QR codes for tourist sights. In 2020, Rome won fourth place in the ICity Rank.

The eternal city offers many fascinating sights, both architecturally and culturally. It allows visitors to glimpse into its future, as well as into its millennia of history. And one thing is for certain, every architect will leave Rome in awe and with new inspiration.

Architect and researcher Chiara Dorbolò writes about the eternal city Rome – but to her the Italian capital is anything but eternal. Read this Metropolis Explained. 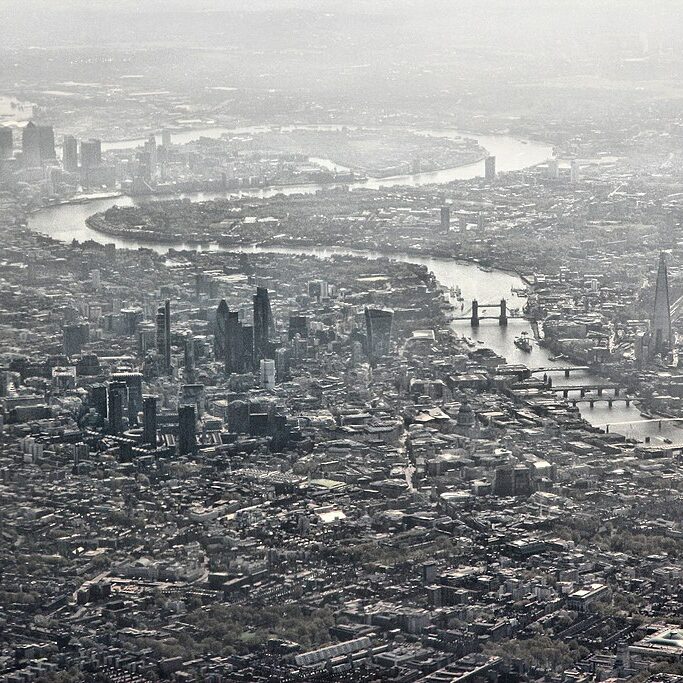 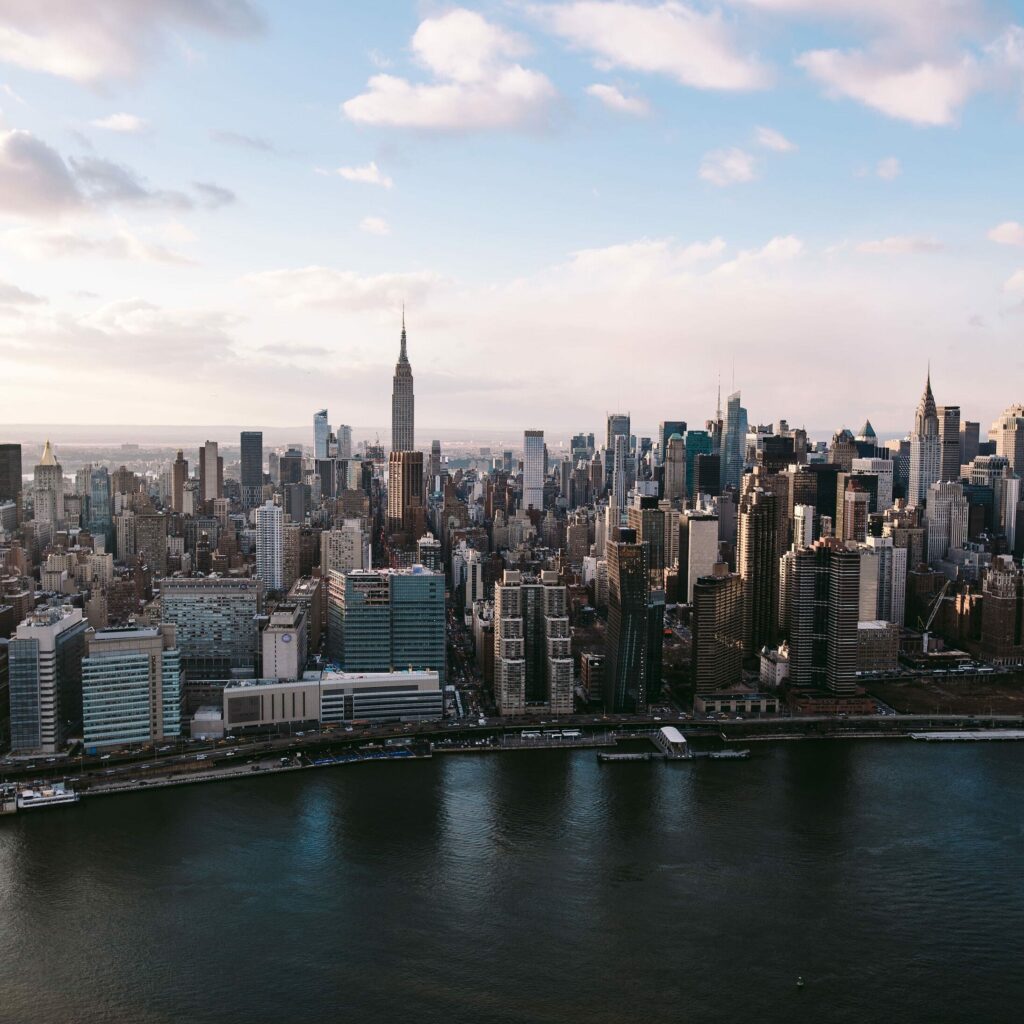